As the iBeacon platform starts to take shape, retailers will start to take notice of the promise it holds. Contextually aware beacons placed strategically throughout a store can push timely information to a smartphone, paving the way for increased sales and data gathering about how customers move through a store. Finding a place to put the beacons may be tough, but GE has a bright idea.

GE is set to debut an LED lighting system named Bytelight, which doubles as a beacon. The system works like any other beacon system, locating shoppers and offering up timely info on the back of an awareness of their proximity to the beacon. A light/beacon in the men’s clothing department wouldn’t necessarily push the same as one in shoes, for instance. 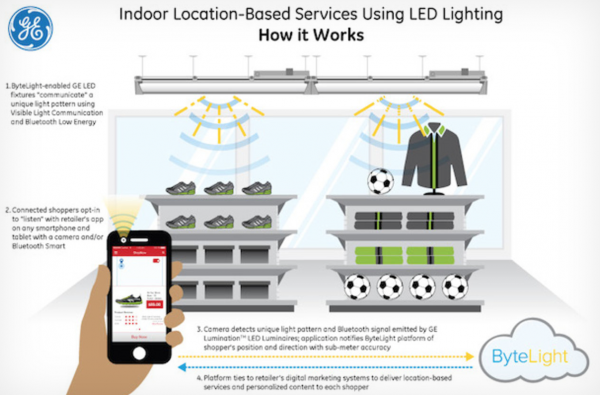 While not the first offering, GE’s is the more useful. Philips announced their lighting beacons earlier this year, but those operate by emitting light pulses that are invisible to the human eye, interacting with a device’s camera. GE’s does that as well but also uses the more familiar and ubiquitous Bluetooth Low Energy, or BLE.

Using BLE also allows for better interaction, as the lighting scheme requires a device camera to be active. The lights from GE aren’t certified as Bluetooth devices, but doing so would be a smart move, which would then allow the lights to push information to customers without the need to have a store app open.

The Bytelight will likely debut at the Light Fair, held June 3-8 in Las Vegas.