Game of Thrones season 8, episode 2 analysis: A Knight of the Seven Kingdoms

With last night’s release of Game of Thrones season 8, episode 2, we’re now a third of the way through the season. There’s only four episodes left, but after last night, we’re not really much closer to tying up any of the show’s loose ends. In fact, one can even argue that the narrative became even harder to wrap up after last night’s episode. Regardless of all of that, one thing is definitely true about A Knight of the Seven Kingdoms: Game of Thrones is winding up to kill a lot of the characters we love.

Before we dive deeper into the episode, consider this your requisite spoiler warning. We’re going to cover the episode from beginning to end in this article, so if you haven’t seen it yet, stop reading here.

A Knight of the Seven Kingdoms analysis

While the premiere episode delivered a lot of long-awaited reunions and showed us how these characters get along when thrust into conflict side-by-side, this week’s episode prepared us for what will undoubtedly be a bloody battle with the White Walkers. 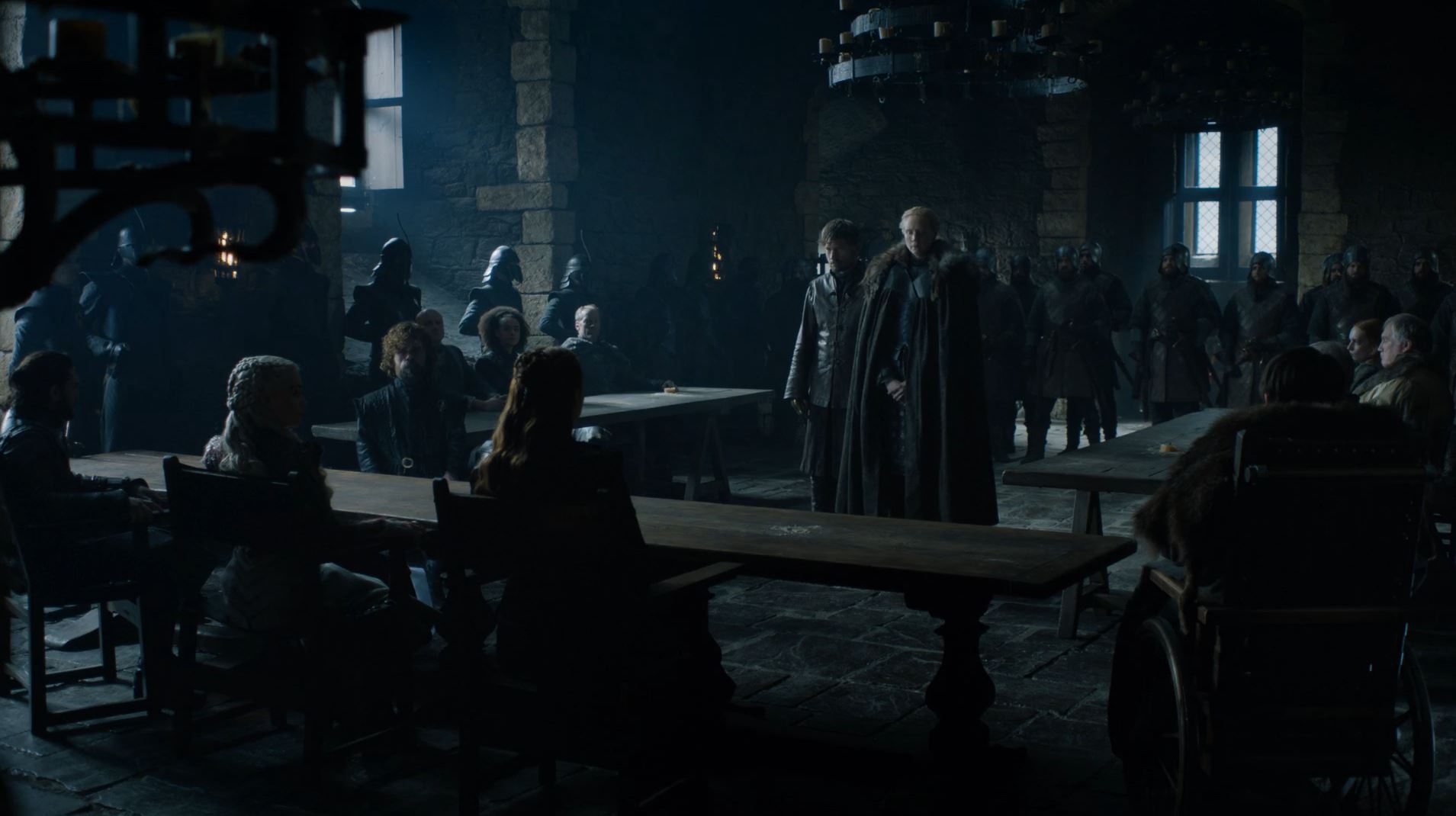 As such, there wasn’t very much that moved the plot forward in this episode. We spent the entire episode in Winterfell and watched as its people prepared for the oncoming battle with the White Walkers, which is drawing ever more imminent. In a lot of ways, A Knight of the Seven Kingdoms serves as the calm before the storm.

Still, the episode did hit a few big plot points, beginning with the arrival of Jaime Lannister in Winterfell. Unsurprisingly, Jaime finds few friendly faces in the North, and Sansa and Daenerys are both initially skeptical that he’s there with good intentions. Jaime tells them that Cersei lied to everyone when she said she’d march the Lannister armies north to assist in fighting back the White Walkers – something we viewers have known since the end of last season. He also informs them that she has the Iron Fleet and the Golden Company of Essos at her disposal, and plans to clean up whatever is left after Winterfell and the White Walkers clash. 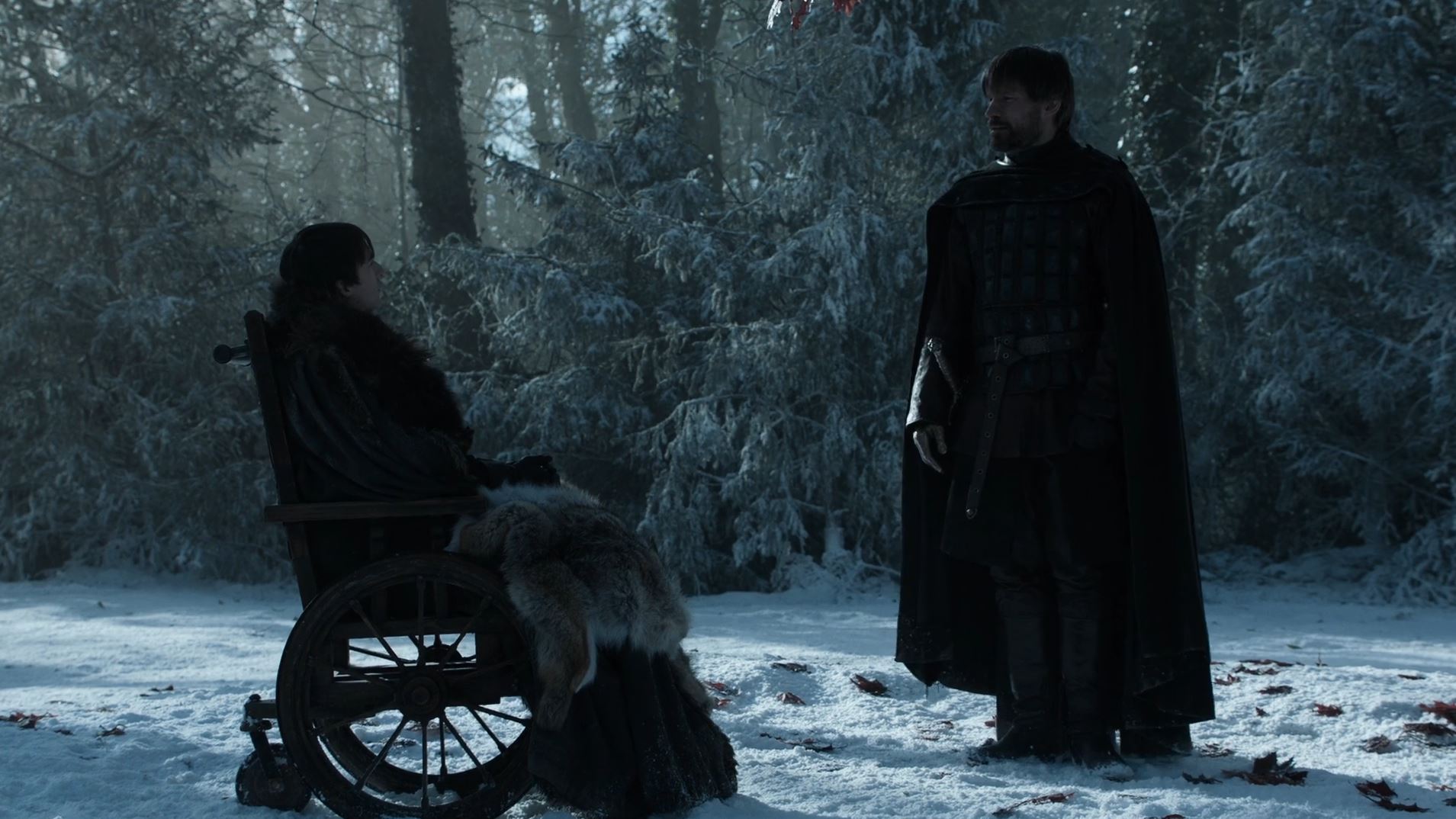 Ultimately, Jaime tells them that he abandoned Cersei because he made a promise to fight for the living and doesn’t intend to break it. Tyrion attempts to vouch for his brother, but obviously, a Lannister going to bat for a Lannister isn’t going to win the hearts of Starks and Targaryens. It isn’t until Brienne of Tarth stands up for Jaime’s honor that Sansa changes her mind, putting her faith in Brienne’s assessment of a man she has every reason to hate.

We see a lot of Dany’s internal struggle come to the surface during this episode. She’s having a difficult time trusting Tyrion, which is understandable considering that Tyrion’s sister is sitting on the Iron Throne. She worries that Tyrion, her Hand of the Queen, might still be in league with his family and working against her. On top of those concerns, Jon ignores her for most of the episode because of the little secret Sam revealed to him last week. 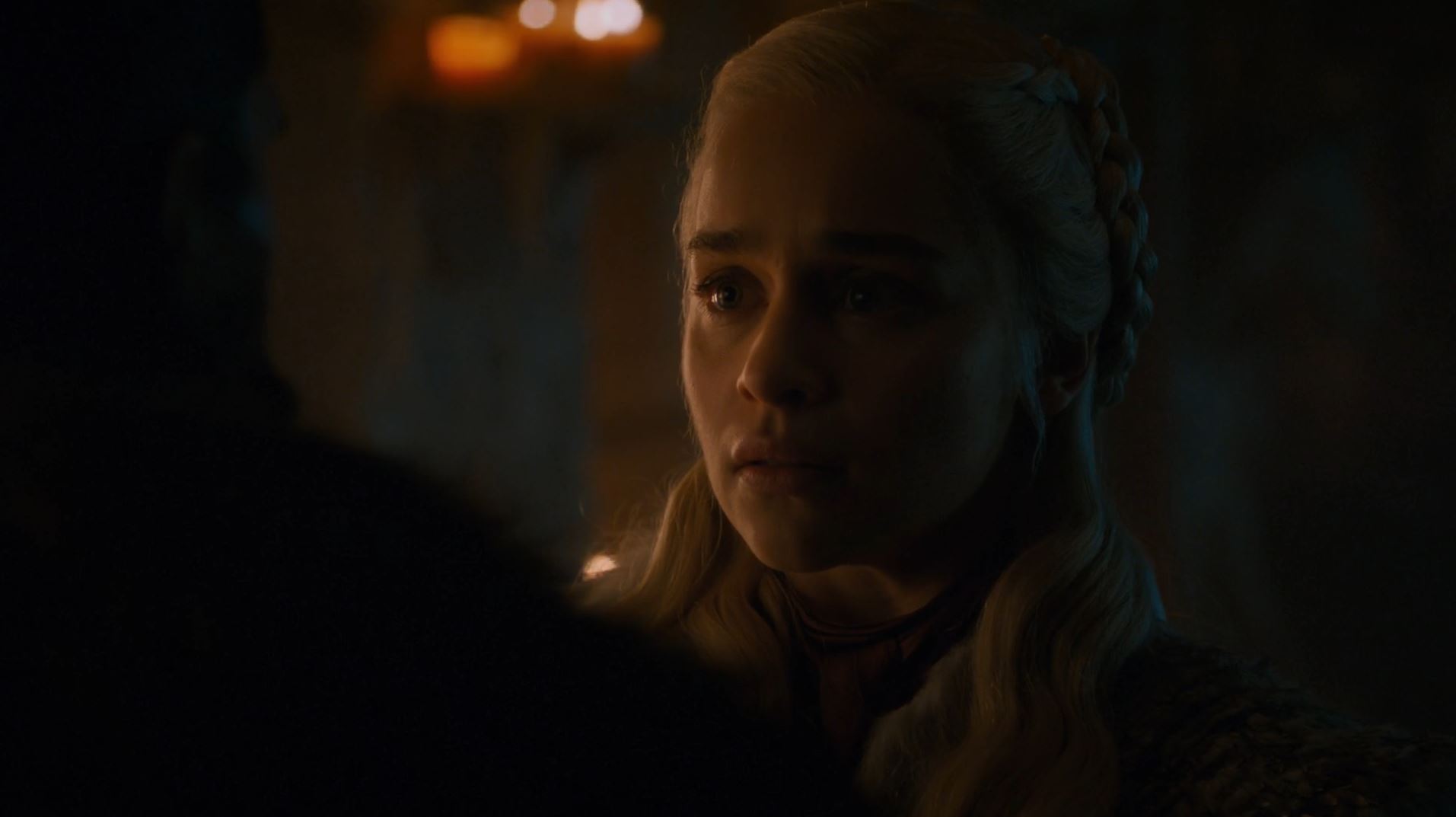 Eventually, Jorah vouches for Tyrion’s character, convincing Daenerys that even though he’s screwed up in the past, his intelligence is a valuable asset to her. He notes that all of us take missteps from time to time, but when Tyrion does it, he owns up to it. Even though Jorah would serve as Hand of the Queen to a woman he loves should Tyrion be removed from his position, he convinces her to keep the Imp around.

Dany and Sansa both have a heart to heart concerning Tyrion and Jon in which Dany admits that she loves Jon as much as he seems (or seemed, at least) to love her. At first it appears Sansa is receptive to this olive branch Dany is extending, but once it’s clear that they’re on the same page concerning Jon, the conversation shifts back to who is the ruler of the North. “What about the North?” Sansa asks. “It was taken from us; we took it back and we said we’d never bow to anyone else again. What about the North?” The two are interrupted before Dany can answer by the return of Theon Greyjoy, who pledges his sword and his Ironborn that are with him to the war for Winterfell. 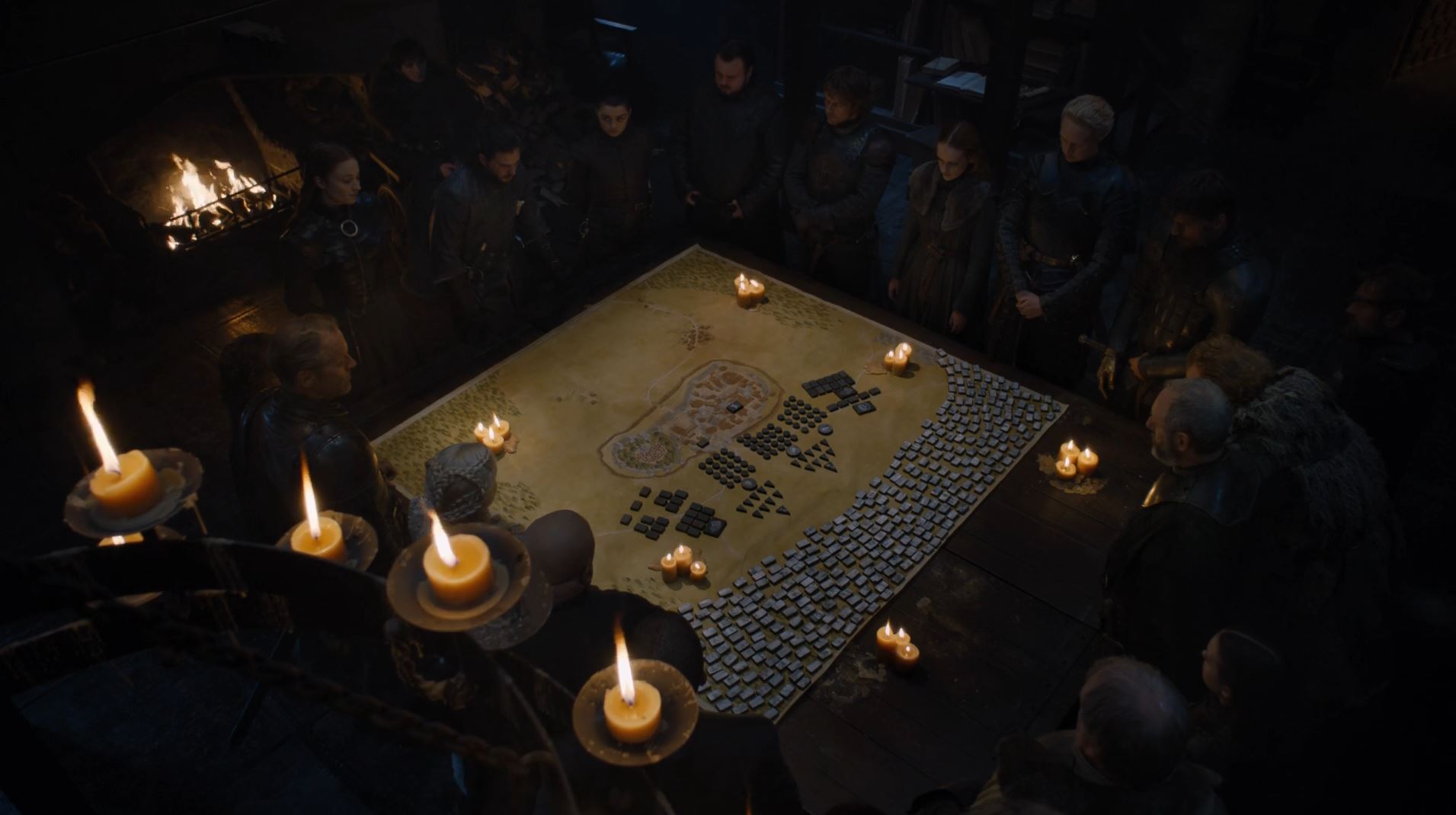 We also get to see the arrival of Tormund, Edd, Beric, and the remaining Wildlings and Night’s Watchmen who survived the destruction of the Wall. They warn Jon and Sam that the legion of dead beat them to Last Hearth, wiping out House Umber in the process. Tormund says that anyone who hasn’t made it to Winterfell by now is dead, and that the White Walkers will arrive at the castle by dawn of the next day. 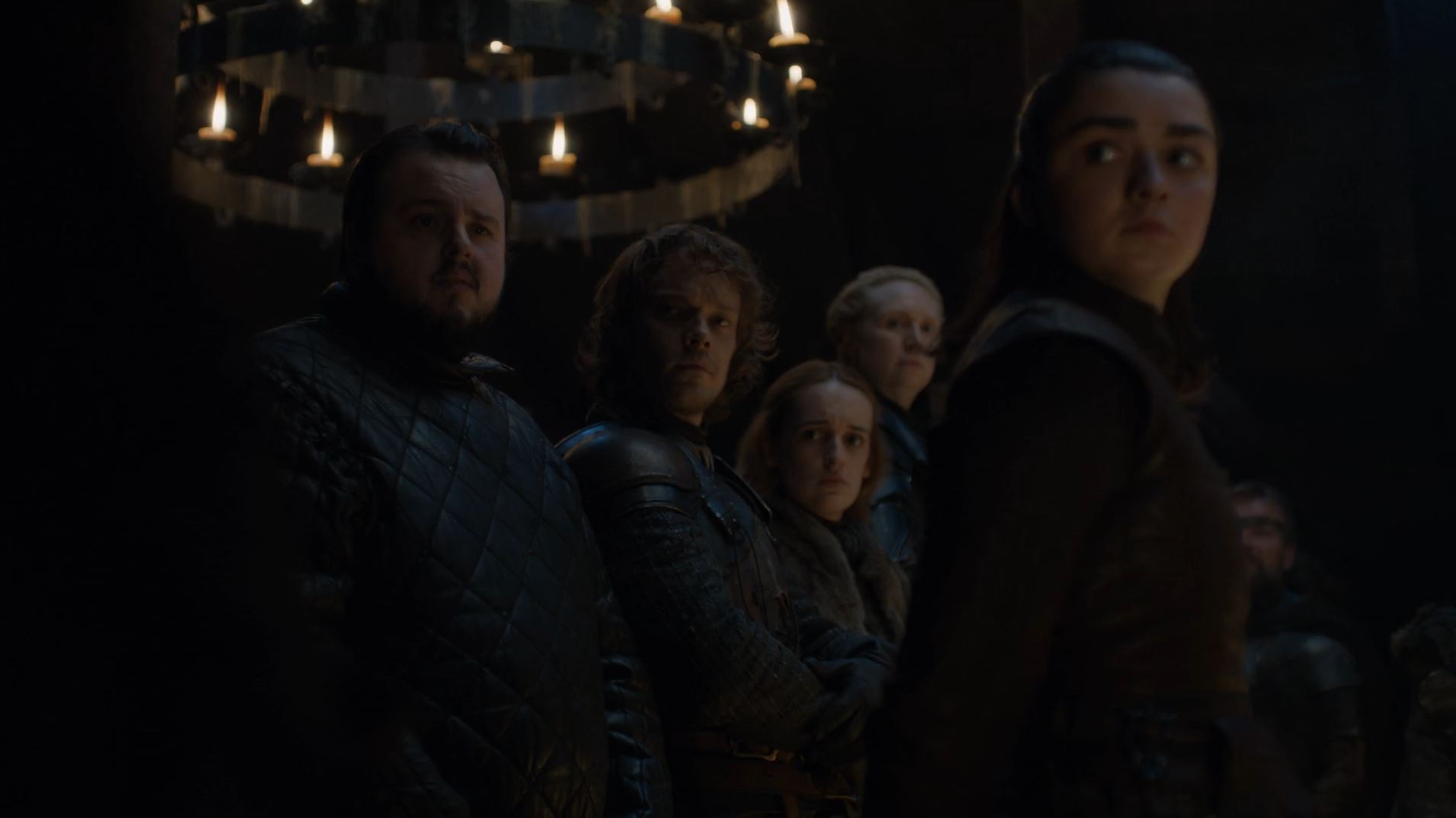 Bran reveals that the Night King is looking to kill him specifically. As the Three-Eyed Raven, he says, he is the memory of man, and the Night King can’t succeed in his mission to wipe man out without killing the Three-Eyed Raven as well. Bran will hide out in Winterfell’s Godswood, guarded by Theon and his Ironborn, to tempt the Night King into showing himself. When he comes after Bran, he’ll make himself vulnerable, hopefully giving our heroes a window to destroy him and end the undead threat.

It’s a long shot and all of these characters know it, so the rest of the episode is a series of rather touching moments that show how they all spend what is presumably their last night alive. Missandei and Grey Worm make plans to travel to Naath and see the beaches again after the war for the living is over and Dany has reclaimed the throne. Arya finally learns that Gendry is Robert Baratheon’s bastard and the two get busy, just as viewers were expecting they would (though that expectation didn’t make the scene any less uncomfortable to watch). The Hound and Beric – two former enemies – share a drink on Winterfell’s battlements. 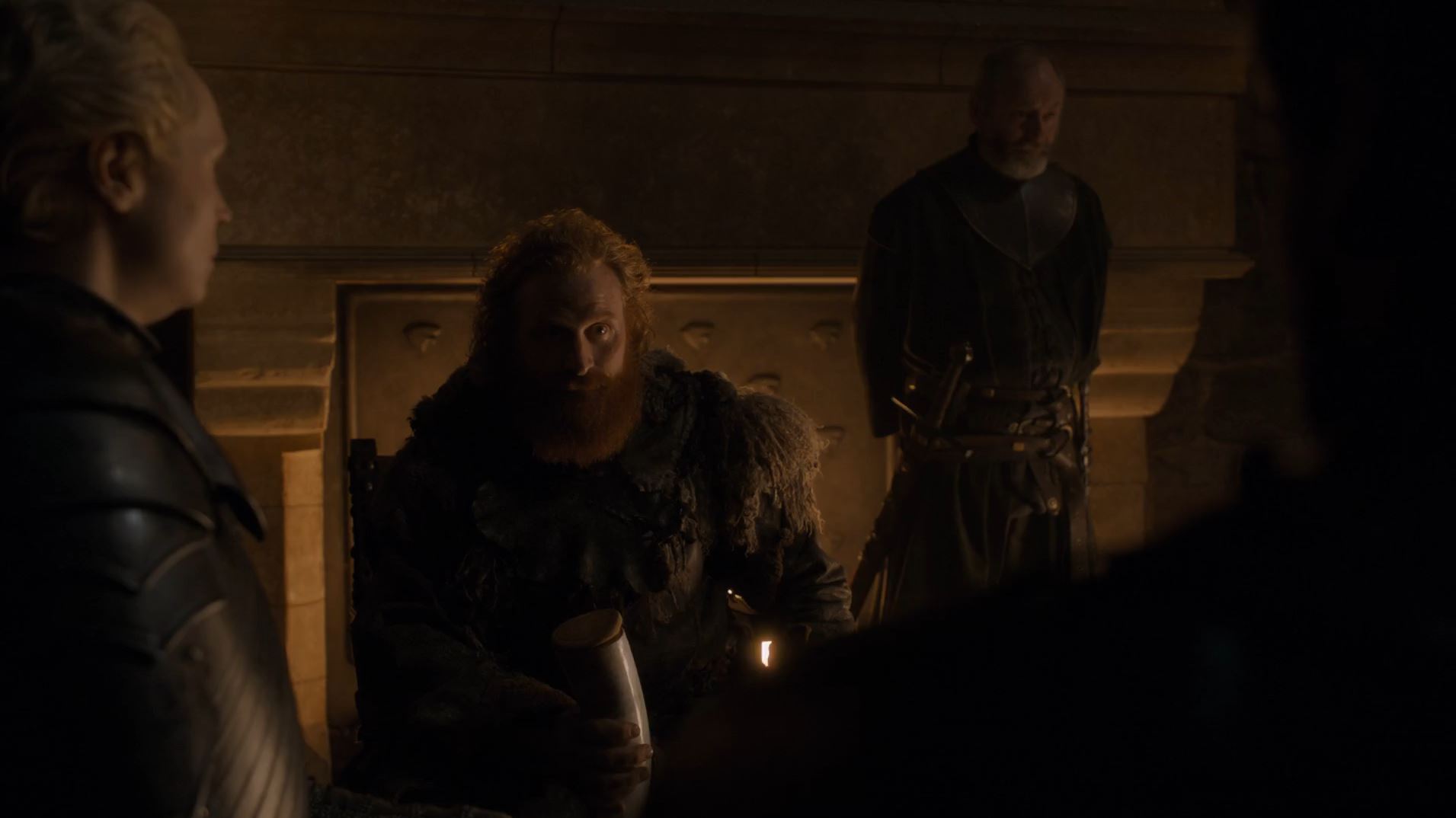 Tormund, Jaime, Tyrion, Podrick, Brienne, and Davos share stories in front of the fire, and it’s here that we see one of the most touching moments of the series so far. Jaime names Brienne a knight of the Seven Kingdoms – a title she’s always wanted for herself but could never have because of the traditions of Westeros. The moment brings Brienne to tears, and it really reinforces the respect she and Jaime have for each other after all they’ve been through.

Toward the end of the show, we arrive at another major plot point for season 8: Jon tells Daenerys that he is actually Aegon Targaryen, the son of Lyanna Stark and Rhaegar Targaryen, Dany’s long-dead brother. That makes Dany his aunt and him the true heir to the Iron Throne. It’s clear that Daenerys doesn’t believe him – he does say that this information came from Sam and Bran, which doesn’t make for the most convincing argument – but before we can see what Dany’s reaction is aside from shock, the dead arrive at Winterfell. 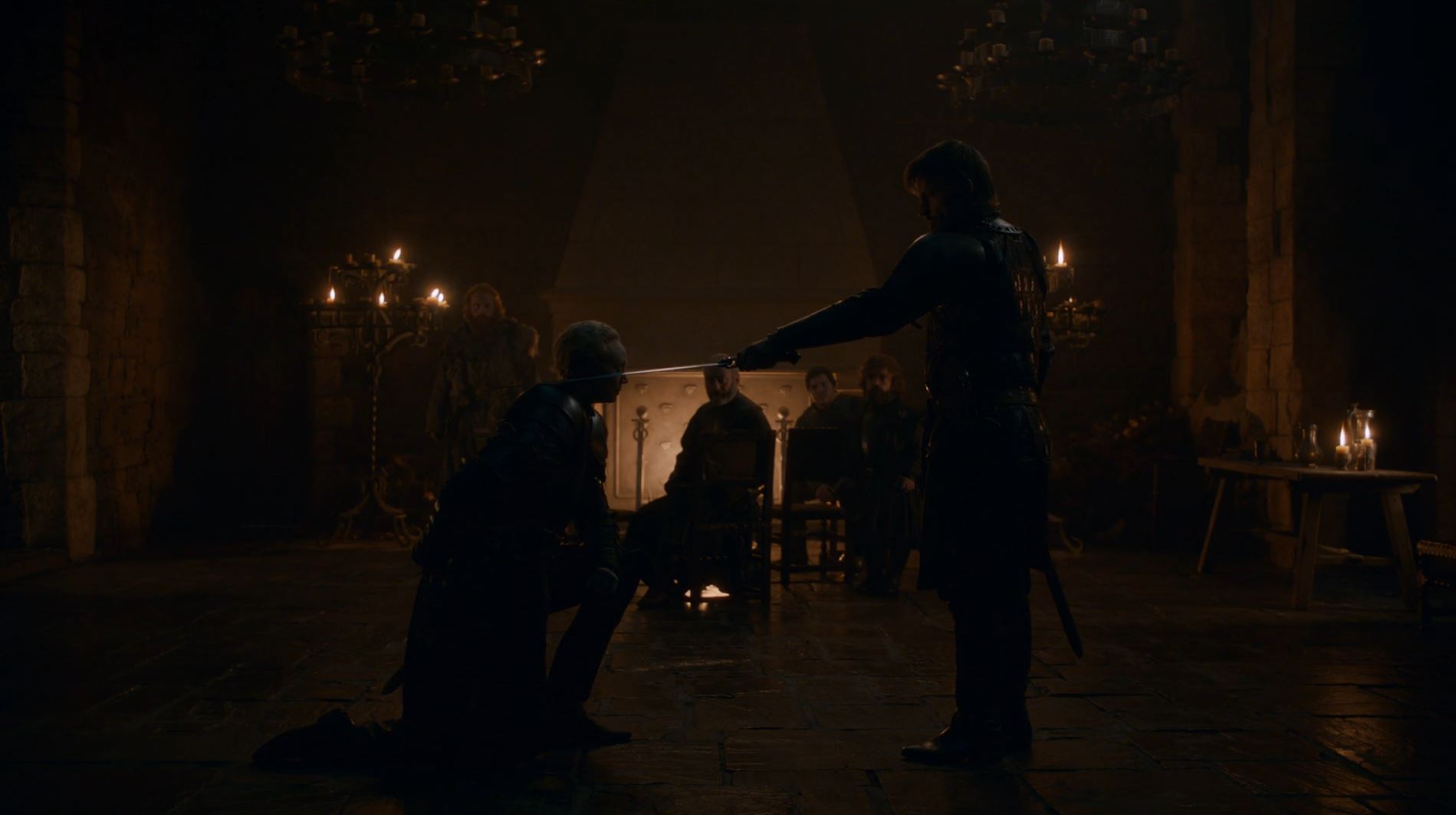 The episode ends with a massive group of White Walkers and wights gathering outside of Winterfell, which means that in the next episode, things will finally be coming to a head. No more preparations, no more reunions, no more tender moments that tug on the heartstrings – just all out war.

There honestly isn’t very much to analyze in this episode, simply because everything that really moved the plot forward came at the tail end of it. The fact that Jon is a Targaryen is now out in the open, and we don’t know how Daenerys is going to react to that. We’re going to have to wait until after the war with the White Walkers to find out how she feels about all this, but it seems safe to assume that Jon’s true parentage is going to drive a wedge between the two of them. 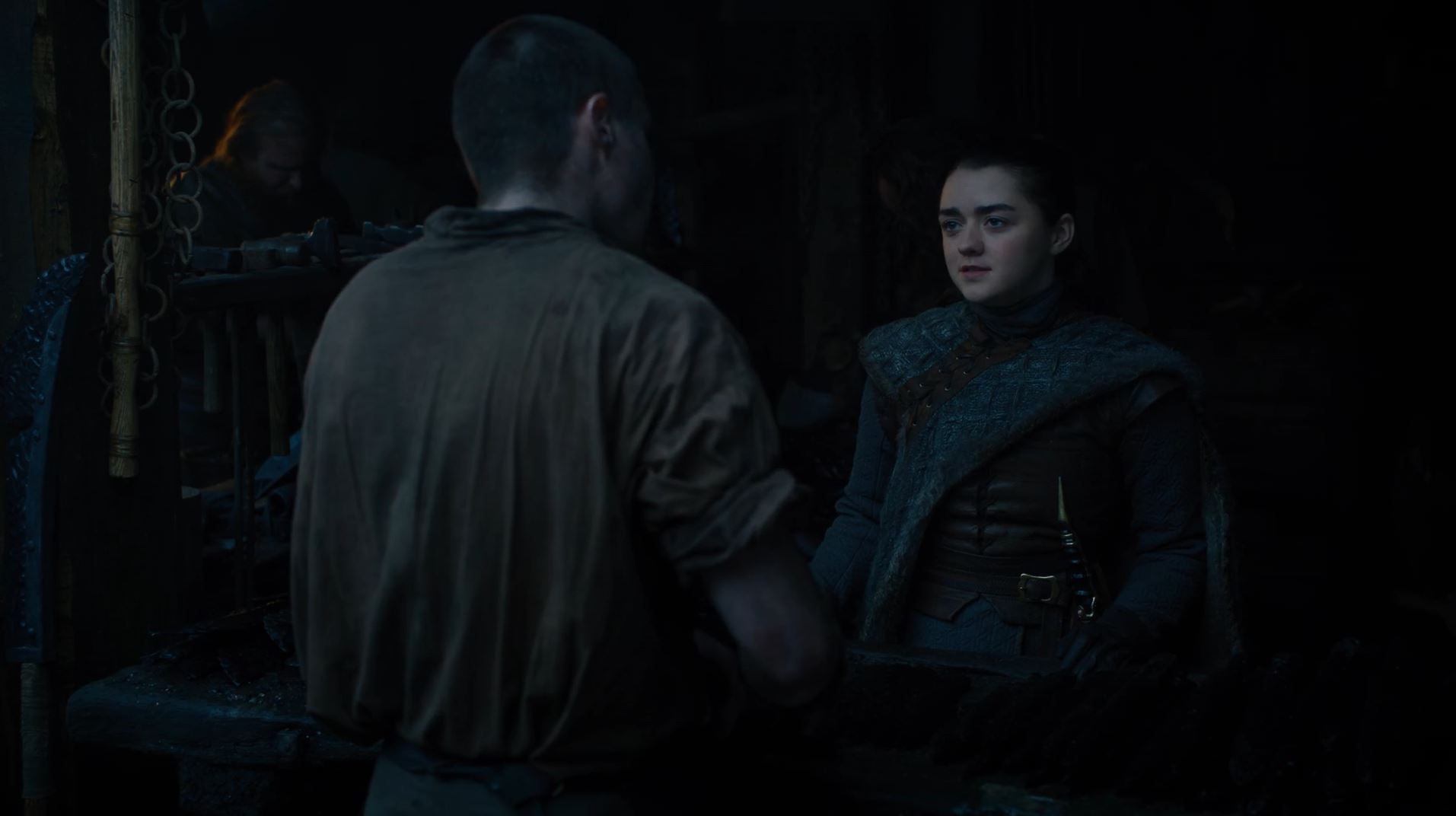 Thanks to Bran, we also know why the White Walkers want to destroy humanity. They want a world where it is endless night; where man doesn’t exist and their relics are buried beneath the snow. They essentially want to destroy the world, but in order to do that, the Night King needs to destroy Bran. He has hunted down various Three-Eyed Ravens throughout history, because as Bran says, the Three-Eyed Raven is the world’s memory. So, this imminent attack on Winterfell is motivated at least in part to kill the Three-Eyed Raven, erasing the memory of man with him.

Jaime’s redemption arc continued in this episode, as he faced a lot of people who have a lot of reasons for hating. He walked into a veritable lion’s den by traveling to Winterfell, but he did so because, as he says during the episode, this is about survival now. Throughout the episode, he made amends for some of the terrible things he’s done in the past, most notably apologizing to Bran for pushing him out that tower window in the series opener all those years ago. Bran largely doesn’t seem to care, but that doesn’t absolve Jaime of what he did, and there’s even the suggestion that Bran will tell the others about what Jaime did if they manage to survive the Night King’s onslaught. 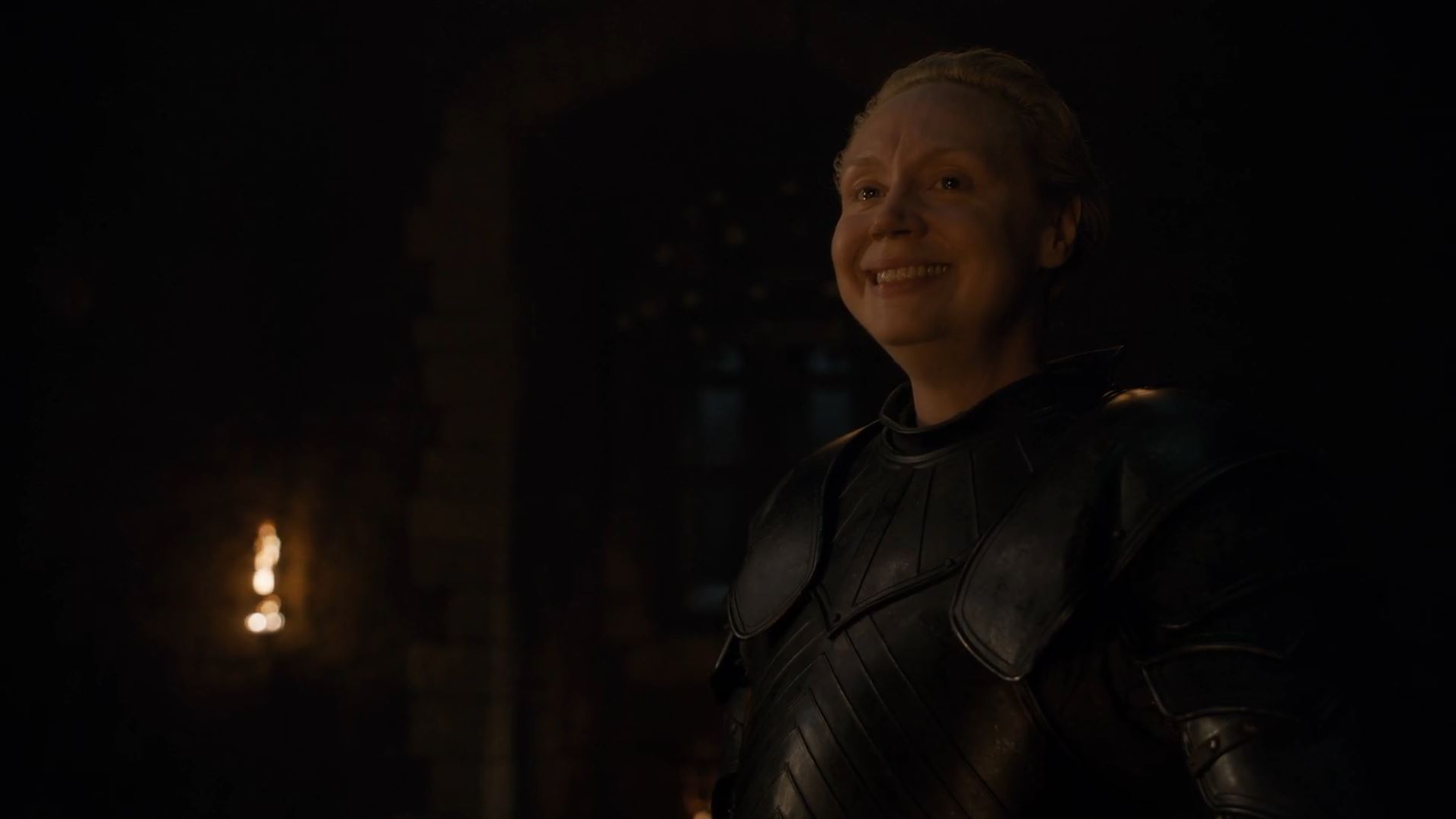 For the most part, though, this was merely an episode to give all of our favorite characters a bit more screen time before the big clash. If there was any question about whether or not the body count will be high after the fight with the White Walkers, it was answered with this episode: A lot of people are going to die, and that’ll probably include many of the people we’ve grown fond of over the years.

It’s hard to predict who’s going to die in the next episode just because of the nature of Game of Thrones, but we should probably expect that many of the show’s supporting characters will bite it. Characters like Beric, Tormund, Grey Worm, Davos, Gendry, Brienne, and even some main characters like Arya, Jon, or Dany might all be gone by this time next week. A Knight of the Seven Kingdoms merely set us up for these deaths, giving us one last chance to connect with some of these characters before they’re gone for good. 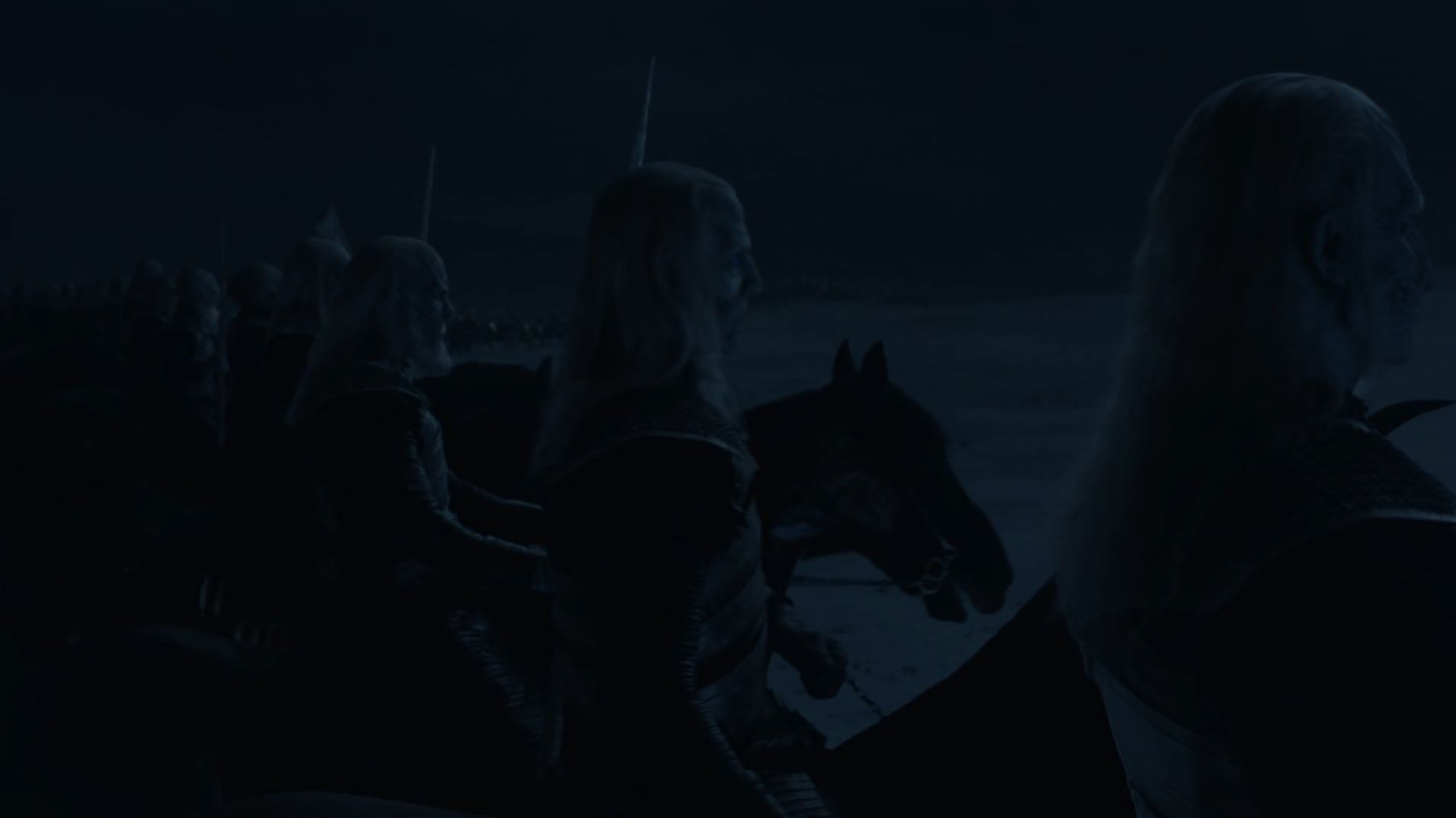 It’s hard to feel confident about Winterfell’s chances going into this fight, too. Pretty much everyone expects the worst, and it’s clear that their plan to draw the Night King out and kill him before they can be overrun by the dead is the only way they’ll succeed. Whether or not we’ll have a resolution in the fight for the living by the end of episode 3 is another question, but with a lot of loose ends to tie up in King’s Landing, it’s likely that we will.

There wasn’t very much political intrigue in this episode – just one final look at the human element that’s at stake with the Night King’s invasion. Personally, I’ve been craving some action, but I still thought this episode was a great send off for characters who won’t survive long enough to see who takes the Iron Throne at the end of it all.

Are you ready for what’s coming up in episode 3? The teaser for the next episode shows our many heroes going to war, and earlier reports have claimed that the Battle for Winterfell will be the longest battle in the history of film and television. Hopefully you enjoyed seeing these characters in warm, vulnerable moments this week, because there won’t be time for any of that in episode 3.