It’s only natural that rivals would take advantage of their opponent’s weakness, so it comes as a surprise to no one that Samsung is now touting the unbending quality of its latest Galaxy Note 4. It doesn’t mention Apple anywhere in this latest infommercial, but it doesn’t take a genius to hear what Samsung is really trying to say.

The “bendgate” issue surrounding the iPhone 6 Plus has somewhat gotten old by now, At first it was an interesting point of discussion about Apple’s first phablet and how other smartphones, some of similar size or build materials, are more unyielding. Samsung, however, is not one to shy away from flogging a dead horse and is now trying to boast how the Galaxy Note 4 has been designed and tested to be not so bendable.

Based on Samsung’s own tests, which may lead you to suspect the impartiality of the results, the Galaxy Note 4 can withstand a pressure as strong as 250N, which is noted to break pencils immediately. But if you do credit this test, you should probably also credit Samsung’s other test, which involves a makeshift human butt, complete with jeans, applying a force equivalent to a 100 kg man sitting on the phone. Naturally, the Galaxy Note 4 survives both tests, otherwise they wouldn’t really be bragging about it.

Samsung credits the metal frame paired with a magnesium bracket for giving the Galaxy Note 4 its strength. That said, the phablet isn’t without its own defects, or so many say in the recent “gapgate” revelation. Samsung was quick to note, however, that the gap on the screen’s edges are, in fact, a necessary, but still unexplained, manufacturing feature and that users have nothing to worry about at all.

Samsung has also revealed on its Facebook account the launch schedule for the phablet around the globe. Laid out on a map with color-coded dots, The Galaxy Note 4 was slated to launch in China and Korea early this week, though that actually happened much earlier last week. The US and parts of Europe will be getting their turn around 17th October with Asia near the end of the month. Latecomers will be Central America, which won’t be getting theirs until November 5 at the latest. 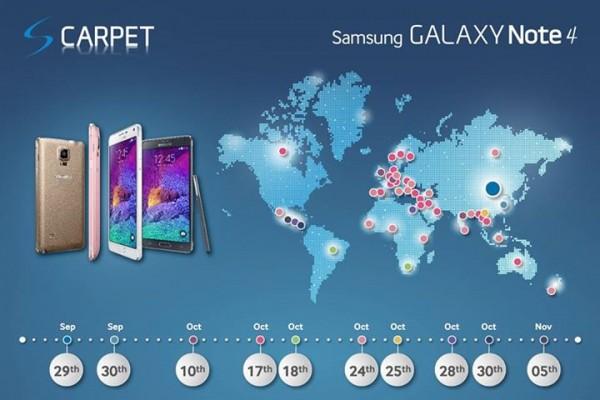