Samsung seems to have an obsession with bringing “quantum tech” to consumers. Its Quantum LED or QLED screens have become its flagship display tech on TVs and, just recently, on some laptops as well. Now it’s bringing yet another quantum-related technology this time to a smartphone. No, the Samsung Galaxy A Quantum isn’t the world’s first QLED phone. It is, however, the world’s first phone with a Quantum Random Number Generator (QRNG) designed for stronger security.

Quantum computing is, as the name implies, based on the principles of quantum physics, which immediately makes it beyond the grasp of the common folk. In this particular case, Samsung is applying quantum cryptography which uses quantum mechanics for security, particularly in generating truly random numbers.

The QRNG chip that Samsung developed uses a CMOS sensor that reads the light emitted by an LED. Or to be more exact, it reads the photon noise which can be unpredictable. This already puts it a step above typical random number generating hardware that can still be cracked with more powerful computers like, for example, quantum computers. 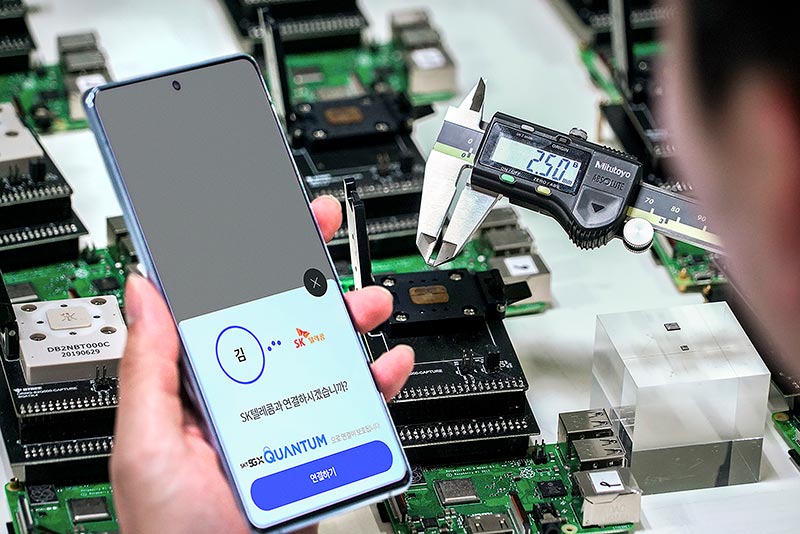 If you’re wondering what the fuss is all about, you wouldn’t be alone. Samsung, however, is distilling the QRNG’s practical security benefits. It all boils down to generating the truly random numbers needed for creating encryption keys that can be used for sensitive services like SK Telecom’s SK Pay, among others.

Beyond that QRNG chip, however, the Galaxy A Quantum is pretty much a normal mid-range Android phone, albeit one with 5G connectivity. That includes specs like an Exynos 980, 8 GB of RAM, a 6.7-inch FHD+ screen, and four cameras led by a 64MP main sensor. In other words, a rebranded and QRNG-equipped Galaxy A71 5G that’s being sold via SK Telecom for 649,000 KRW, roughly $530.