In a release this week, the Federal Trade Commission has warned the public about a Netflix phishing scam that is making its way into many inboxes. According to FTC Consumer Education Specialist Colleen Tressler, the scam involves an email that realistically replicates the look of an official Netflix email, but that will steal banking info if the user falls for the ruse.

News of the phishing scam was reportedly first publicized by a police department in Ohio, catching the attention of officials and the public alike. According to the FTC, which shared the screenshot below, the scam involves an email featuring the Netflix logo that appears to be from the company itself. 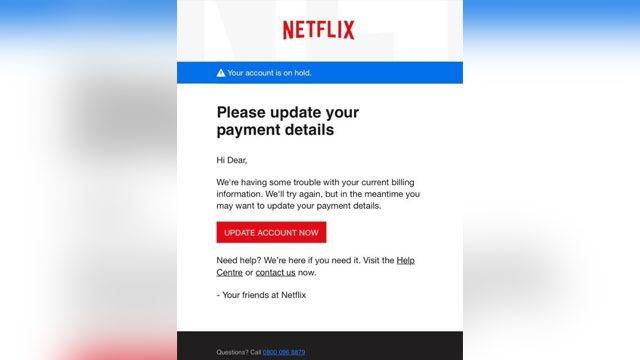 Of course, users who fall for the phishing attempt will be providing their banking information to the scammers who may then use the details to make purchases with their account. These emails aren’t uncommon and have impacted both individuals and companies alike.

The FTC encourages recipients to report phishing emails by forwarding the email to an address it uses to monitor these messages: spam@uce.gov. Individuals who suspect an email is a phishing attempt should pay careful attention to the sender’s email address, contact the company to verify the message’s authenticity, and look for indications that something is off, such as misspellings or incorrect info.