Forza Motorsport 7 Review: Any more real and you’d be paying for gas

Forza Motorsport has managed to captivate me for twelve years now. Starting with 233 cars and 31 tracks back in 2005, the game has evolved at a rapid pace year after year. Now, with over 700 cars and 32 race environments, Forza 7 is the biggest version ever.

We can thank cutting-edge laser scanning and 3D mapping technology for the tracks and locations having gained so much detail. The first Forza Motorsport still played more like an arcade game than a serious simulator in the vein of the benchmark Gran Turismo. The physics were still very simple and the driver AI immature. Today, with Forza Motorsport 7, there’s barely a resemblance to that original game. Things like tire physics and weather were not even a consideration back then. 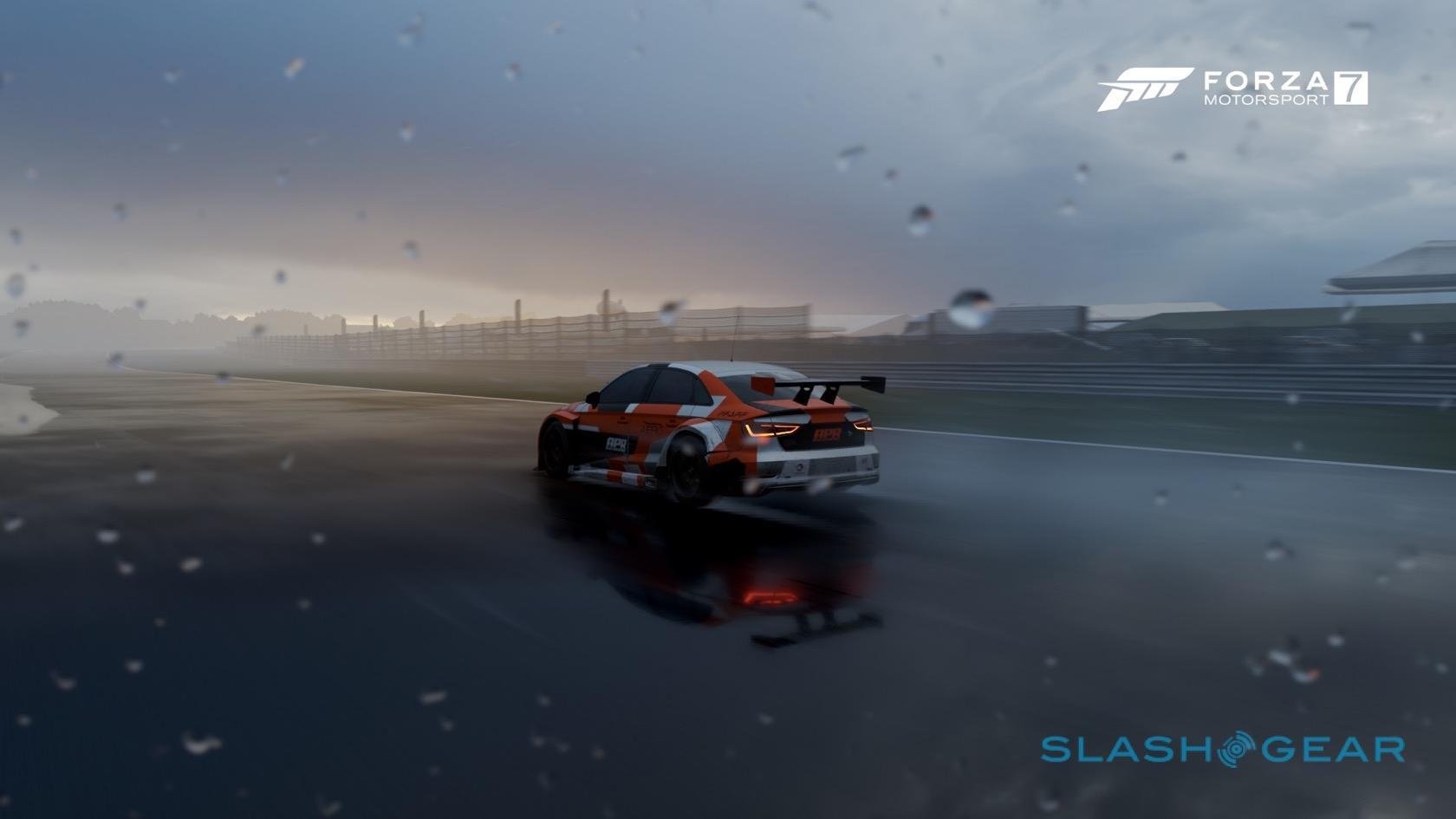 Today, while blasting down Silverstone’s Hangar Straight in a BTCC Audi S3 you can hear the engine revs drop as the car is hitting puddles, and see the change in direction as those puddles act as brakes, slowing you and throwing off the car’s balance. Indeed, everything in the environment has an impact on your car. As you accelerate up a hill, you can hear and see the car’s performance drop off. Even the windshield wipers start to twitch in the wind. They’ve modeled almost everything.

Forza Motorsport 7 has built upon the successful role-playing game (RPG) dynamic from the franchise’s history. There are now several types of currency in the game, starting with Series Points (SP), Credits, and Car Tiers and Experience Points (XP) which translate to your Driver Level. Each of these build on each other: for instance, earning XP allows your driver to level up and, at certain levels, you have the option for credits, a car, or a suit. If you choose the car, it will boost your Car Tier points. 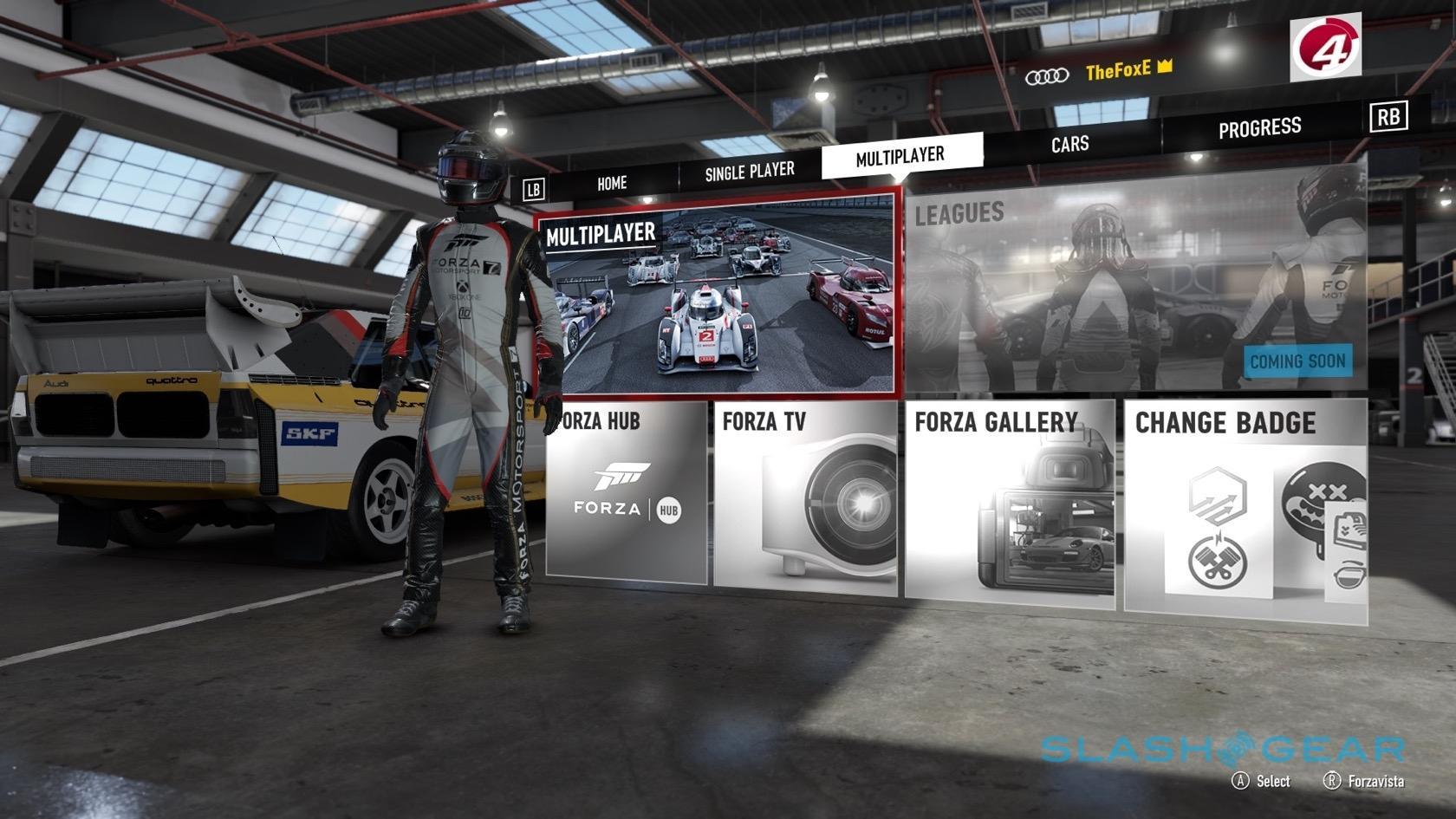 The ultimate goal is to win the Forza Drivers Cup. That consists of five Championships, with Turn10 dropping you into a brand new Porsche GT2RS on the Hafeet Mountain Pass to start your career. There are three other races that preview what’s to come. The Seeker Championship consists of a 7 Series and 3 Showcases. The Open Wheel Legends Series puts you behind the wheel of some sixties-era Grand Prix cars, meanwhile, and the Audi Models showcase faces you off against a pack of RS cars, demanding that you and the R8 LMS you’re driving must must pass them all within one lap. 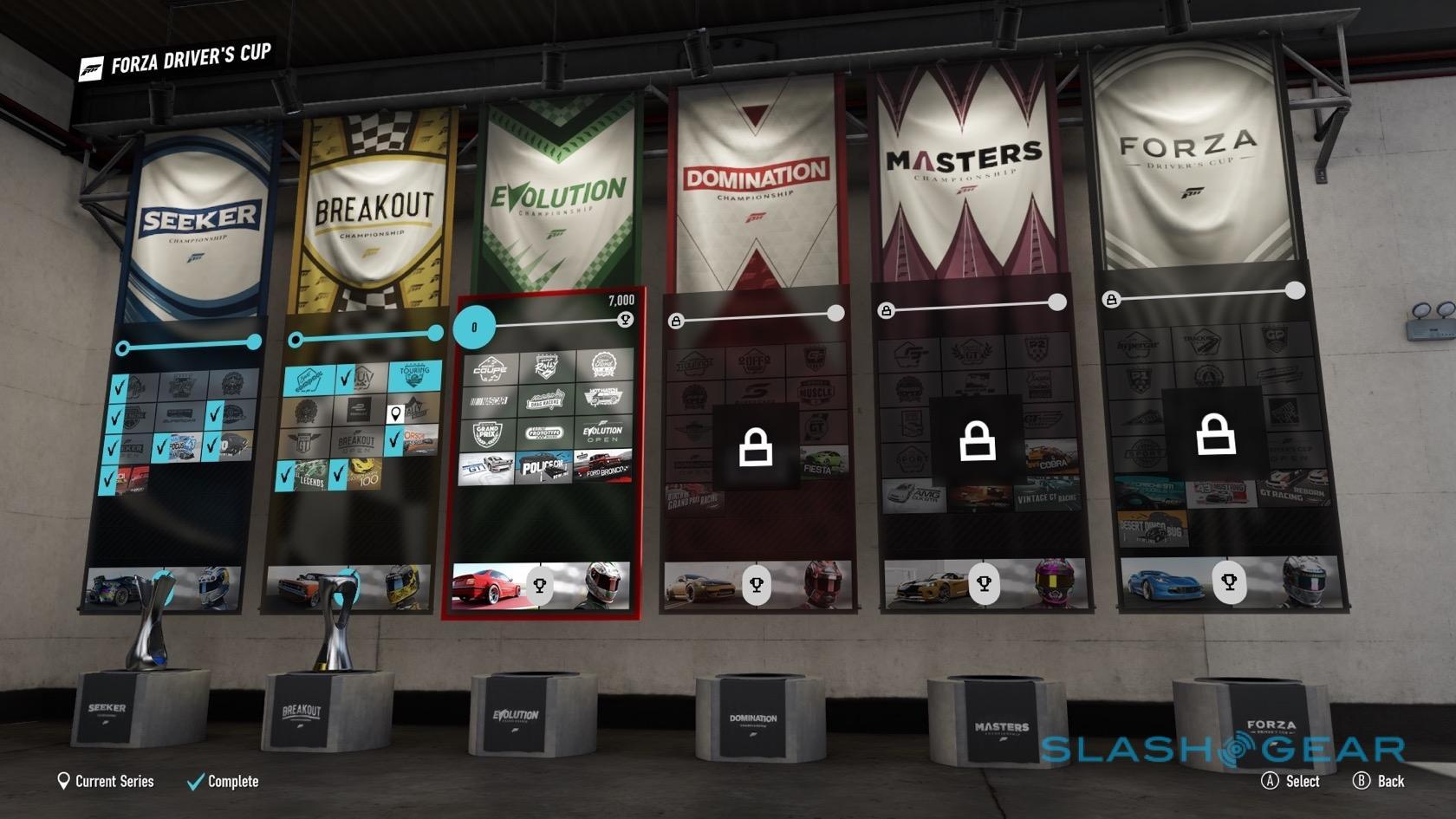 That’s an important thing to consider, since credits are one of the most important elements of Forza Motorsport 7. To take part in many of the Series, you need to buy your car. So, to keep earning SP, you need to make sure that you are spending your credits carefully. They’re also required to buy the new Prize Crates, which can contain Legendary cars, Driver Gear, Mods, and badges. 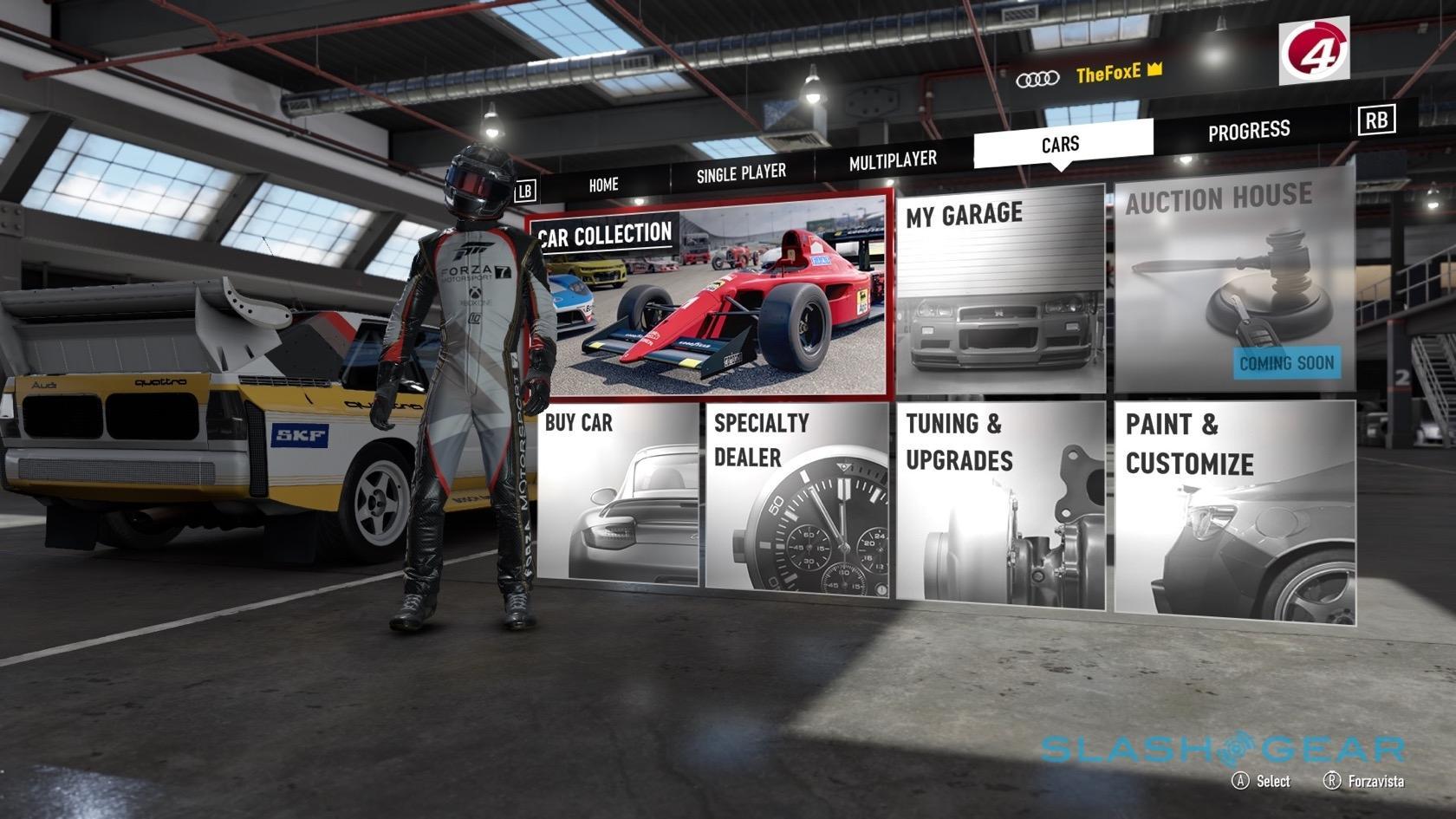 The cars in Forza Motorsport 7 break down into five tiers: Common, Uncommon, Rare, Super Rare, and Legendary. To unlock each tier, you must first build up your Collector Score. Each car is worth a different amount of points, with that number climbing depending on the rarity of the car. The common Nissan Juke, for example, will earn you a mere 75 Collectors Points, while the Porsche 918 would net you 300.

Some cars have a Forza Edition, which is part of the VIP Car Pack. These models provide a percentage bonus credit and an extra credit under certain circumstances. For instance, the 2014 BMW M4 Coupe Forza Edition provides 40-percent extra credits and +10,000 credits when you race at the Nürburgring. Keep an eye out for these cars and use them whenever possible. 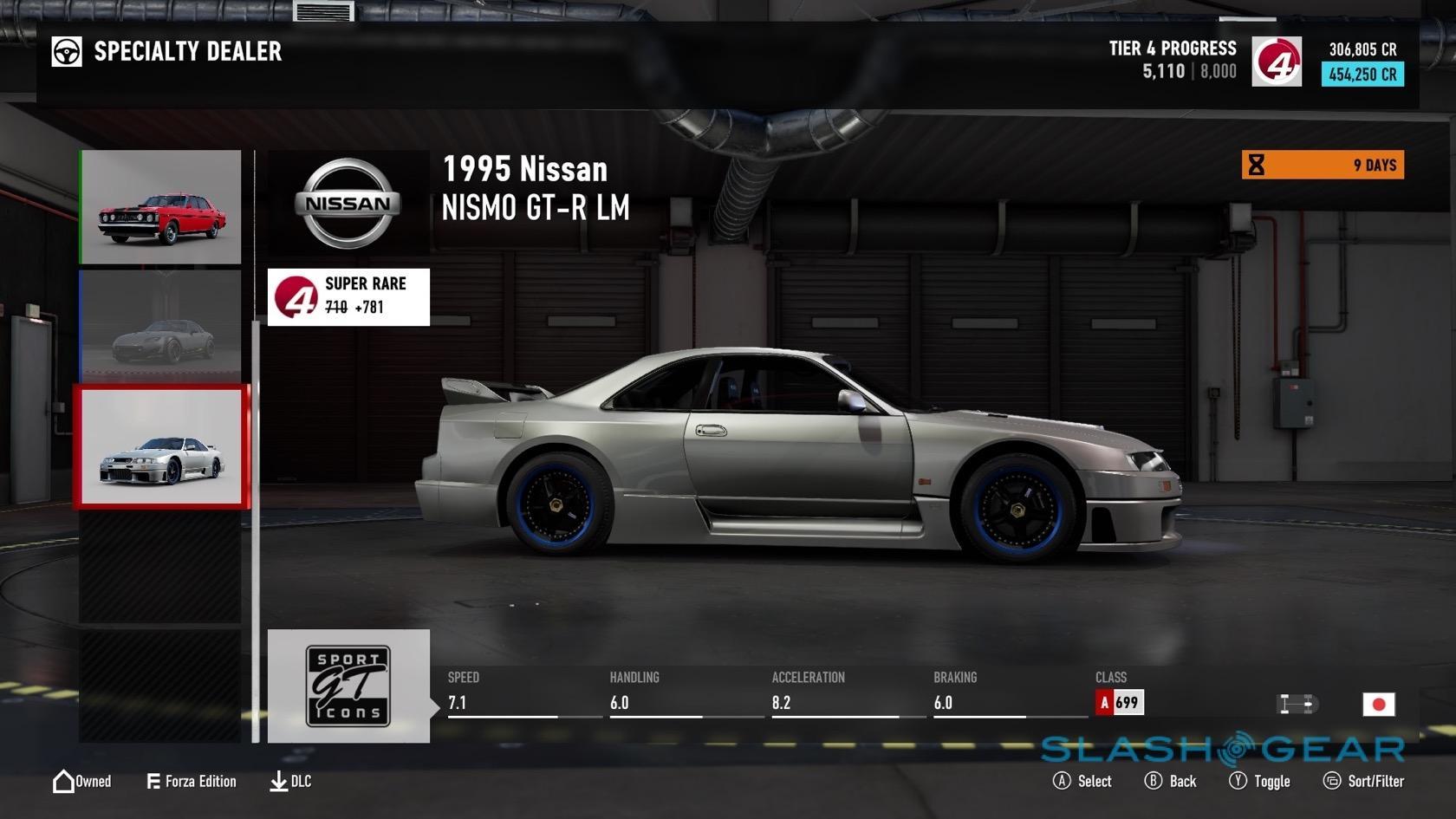 Driver Gear is something new as well. Before, you could change the color of the outfit your driver was wearing. Now you can choose their race suit, and there are hundreds to pick between. They rank from Common and Uncommon, through to Rare and Super Rare, and finally Legendary. Forza Favorites includes suits that feature Forza branding, while pop culture suits include more unusual fare like a tuxedo, NASA Space Suit, Knight, Ninja, and more.

There are team colors, Car brands, Race Tracks, Country Flags, Pattern Camo and Pattern General; the list goes on and on. As far as I can tell, these Driver Gear variations don’t affect the gameplay, and there are no rewards or level-ups provided by the gear, but they do make the game feel more personal. 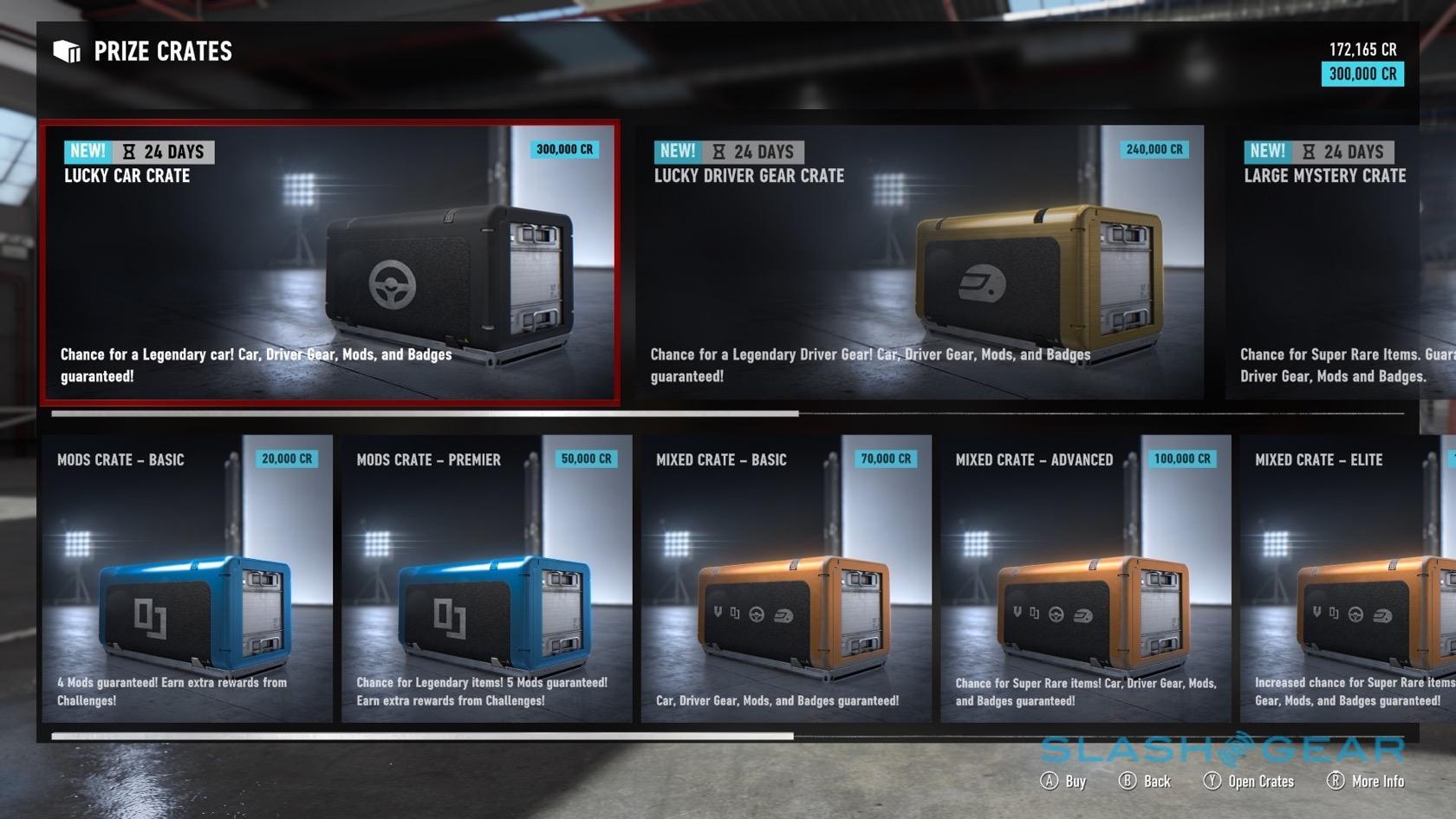 Mods continue from Forza 6, and they provide a boost in Credits and XP. The mods themselves have evolved, mind, with several rankings from Common, Uncommon, Rare, Very Rare, and finally Legendary. Some mods only allow a bonus if you meet exact criteria: the Not Even Close mod, for example, provides a +50-percent credit bonus when you finish the race 100 meters ahead of your opponent. Each mod also has a value, and you can sell them. There’s also a limit to how many times you can use a mod: some are good for five uses, and others are one-time only.

The only thing that you can’t control is the weather

One of my favorite things about Forza Motorsport is how flexible the gameplay is. To start, it’s important to match the assists and Drivatar difficulty with your skill level. As you work your way through the races and the AI detects that your skills are progressing, it will prompt you to increase the Drivatar difficulty. Six global assist templates range from Super Easy to Veteran, and custom, and allow you to turn the driving line off and on, configure braking, traction control, shifting, and other aids. The new friction assist doesn’t change the grip on asphalt, but it makes puddles and off-track surfaces more forgiving. You can also set the length of the races as well in the Forza Cup. 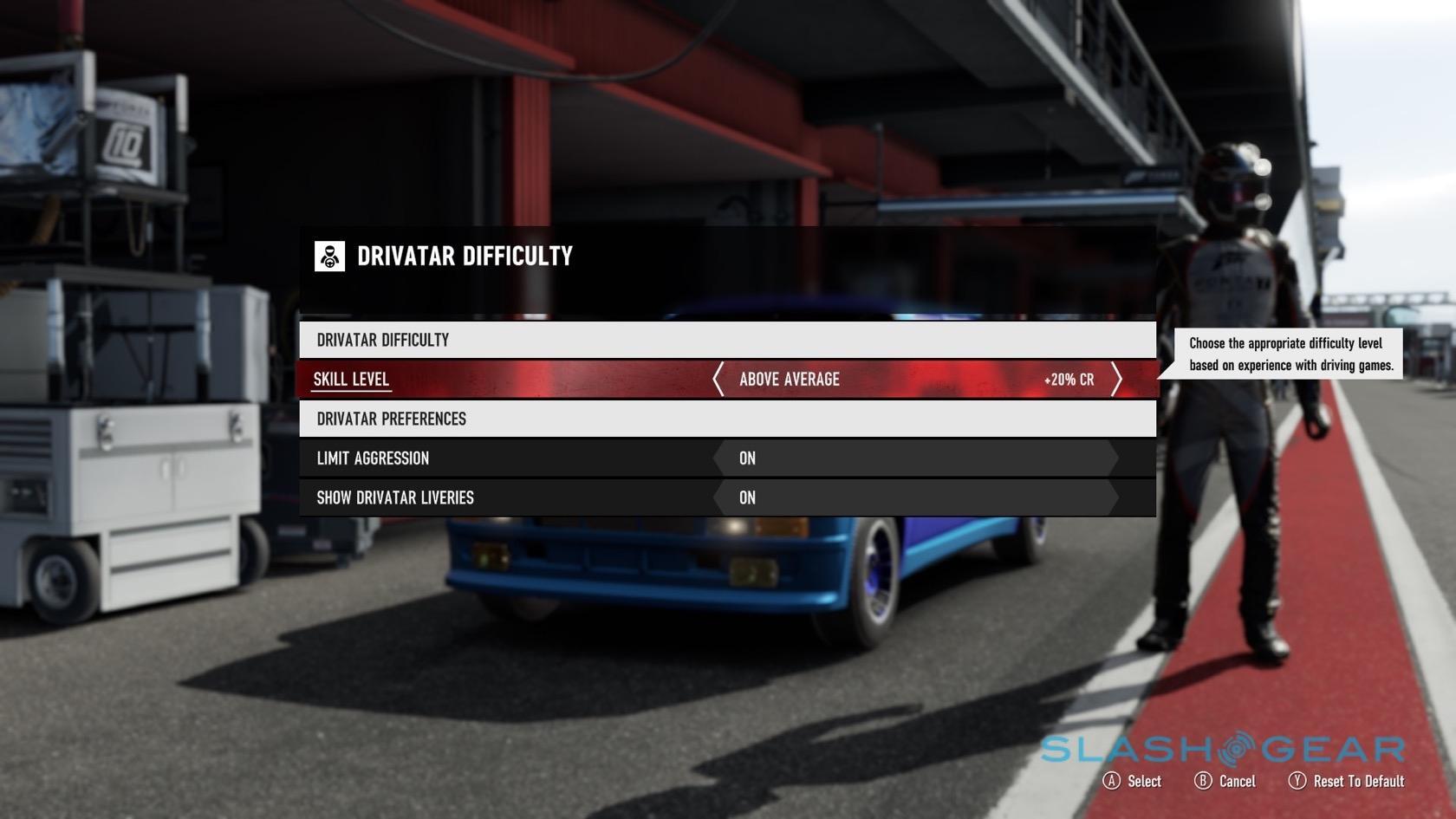 The whole game is dynamic and very few people will share the same experiences while driving. Depending on your skill level, the level of driving aids, and Drivatar difficulty, each session will be very different. I felt that during the BTCC races the Drivatars were very aggressive and there was lots of contact just like in real BTCC racing, with the cars often staying bunched together. In some races, once you were able to break through the pack it was easy to put plenty of distance between you and the other racers. Other times, it was a fierce battle until the end between the top 3 cars. It’s these variations in the racing which help to keep the gameplay interesting. 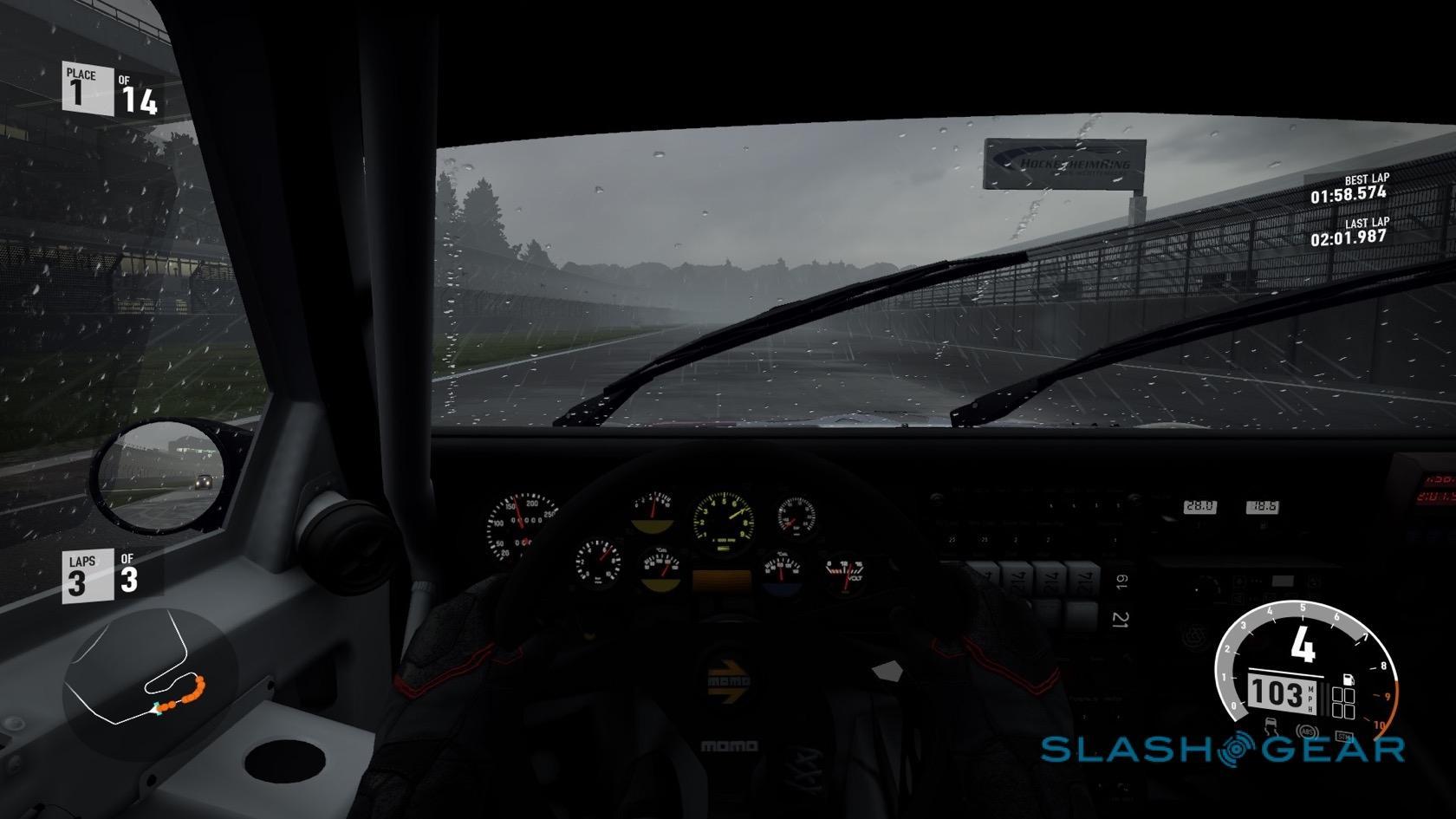 While weather was introduced in Forza Motorsport 6, it was static. If it was raining or dark, it was for the duration of the race. In Forza Motorsport 7, the time of day is taken into account, and rain can start in the middle of a race. Even once the rain has stopped, the track will stay slippery and slowly dry off. It’s also possible to start a race at night, but cross the finish line at dawn. The variable time and weather are very well done, as is the the level of detail in the skies. I can’t wait to play this game in 4K with HDR as it is intended. 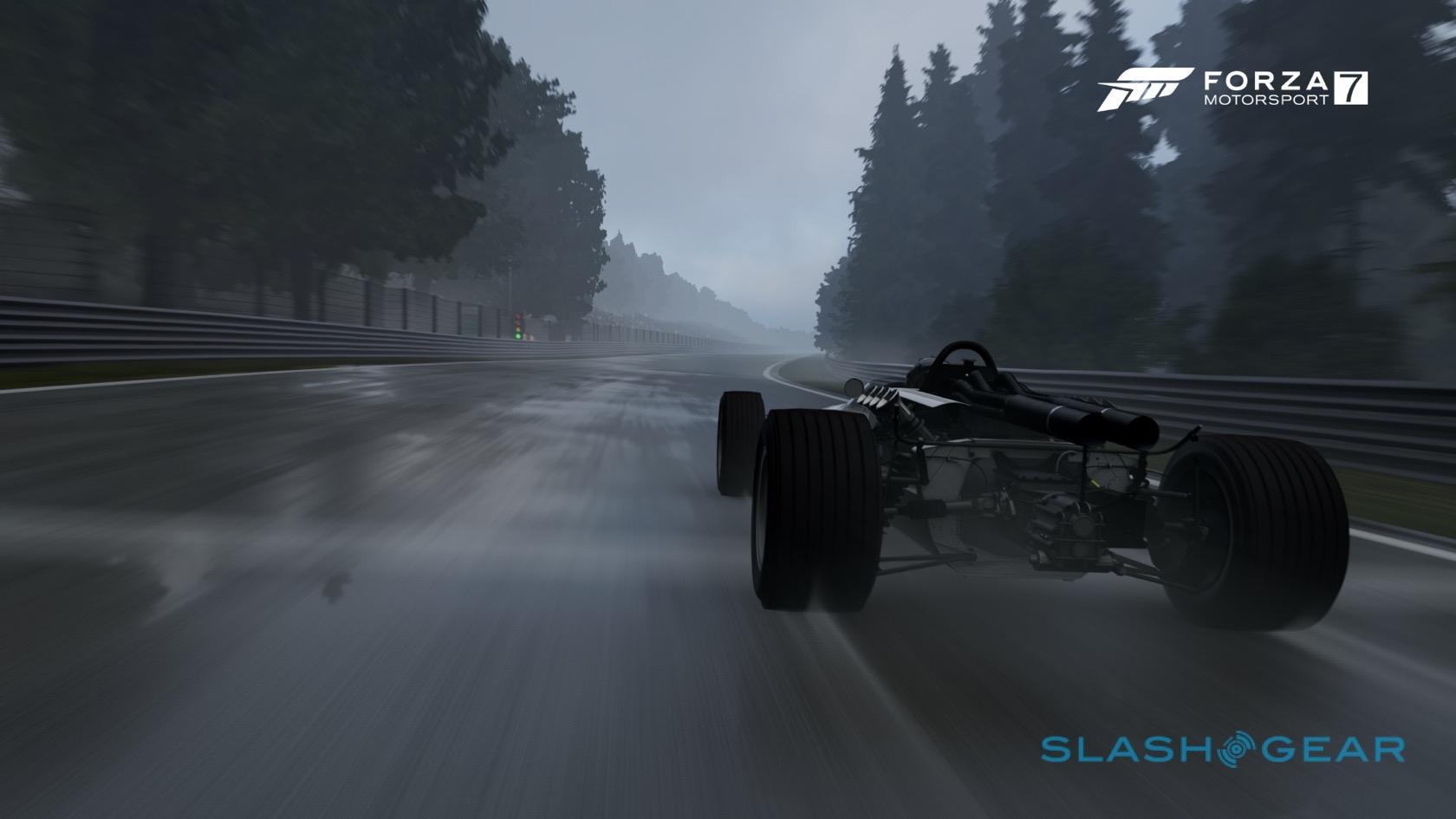 There are 30 locations and I bet that number will grow with DLCs. The limited number of the tracks in the past was always maddening. This time around the variety is very much welcome, and I’m particularly happy to see the return of Maple Valley Raceway. Turn10 has covered some of the most iconic race tracks in the world and some of the most beautiful cities, ranging from Le Mans Circuit de La Sarthe, to the twisty Circuit de Barcelona-Catalunya, and the sandy Hafeet Mountain Pass. There’s lots of turns to perfect and many variations with each track. 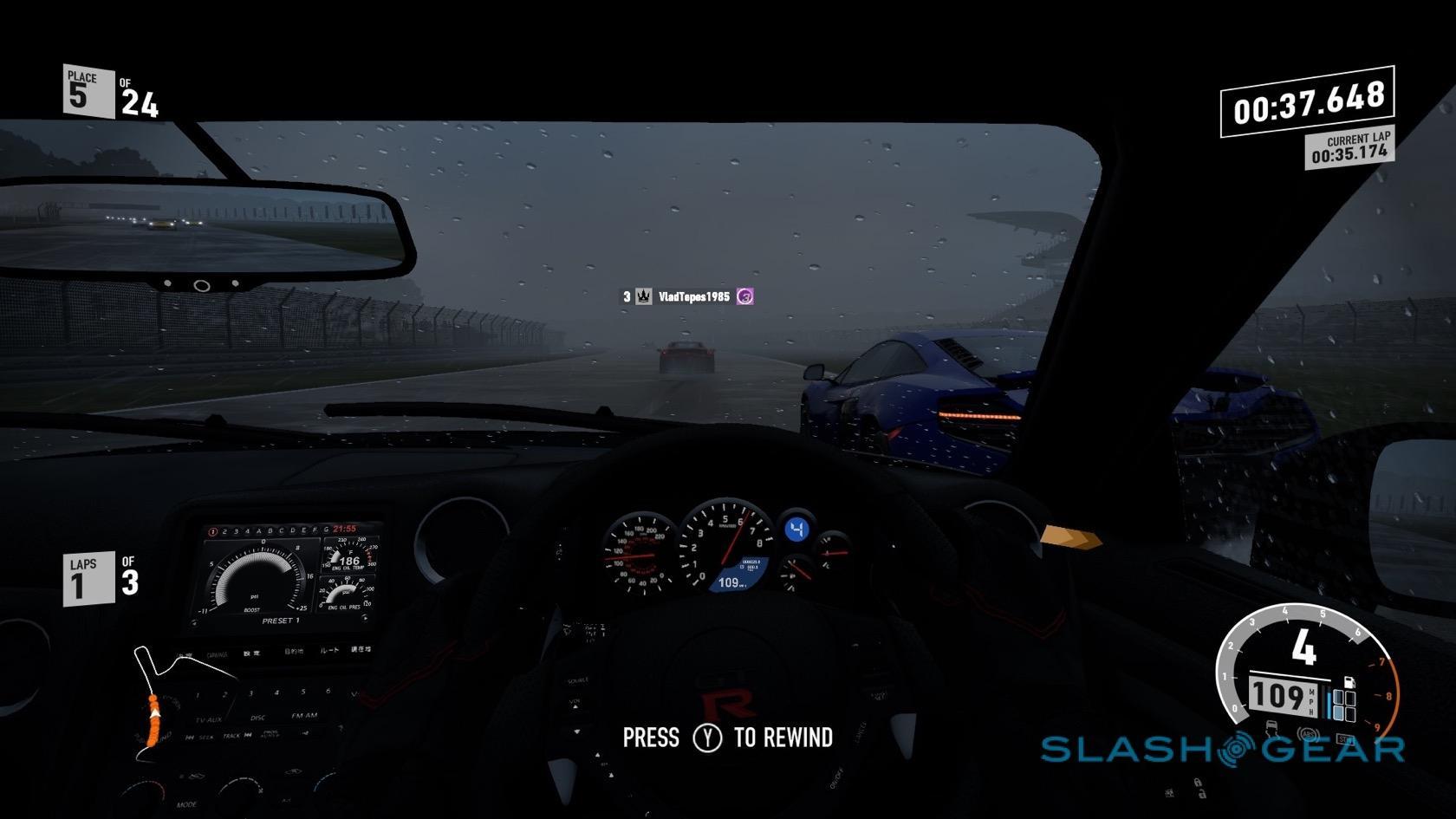 Turn 10 Studios used the latest in laser scanning and GPS mapping technology to recreate every detail of the tracks. Every dip, detail, and off-camber section of each track is present. The changing weather conditions and visibility make these variations in the surface even more apparent and unpredictable, especially as the rain intensifies and puddles start to form on the uneven parts of the track. The lap times immediately begin to drop as the weather worsens, demanding an even higher level of finesse to keep the car on the track. The braking zone distances grow, and hard acceleration will send you sliding into the rough.

I play a lot of racing games and, for me, there’s a huge and glaring omission in Forza Motorsport 7. That’s a race engineer. Many of the cars in the game are not tuned well off the showroom floor; it takes knowledge to get some of these cars to corner well and be successful. In Project Cars 2, for instance, in the race engineer screen you’re asked a series of questions around driving difficulties, such as whether you had trouble with cornering. The race engineer then makes adjustments to the car, while throwing in pit lane strategy. 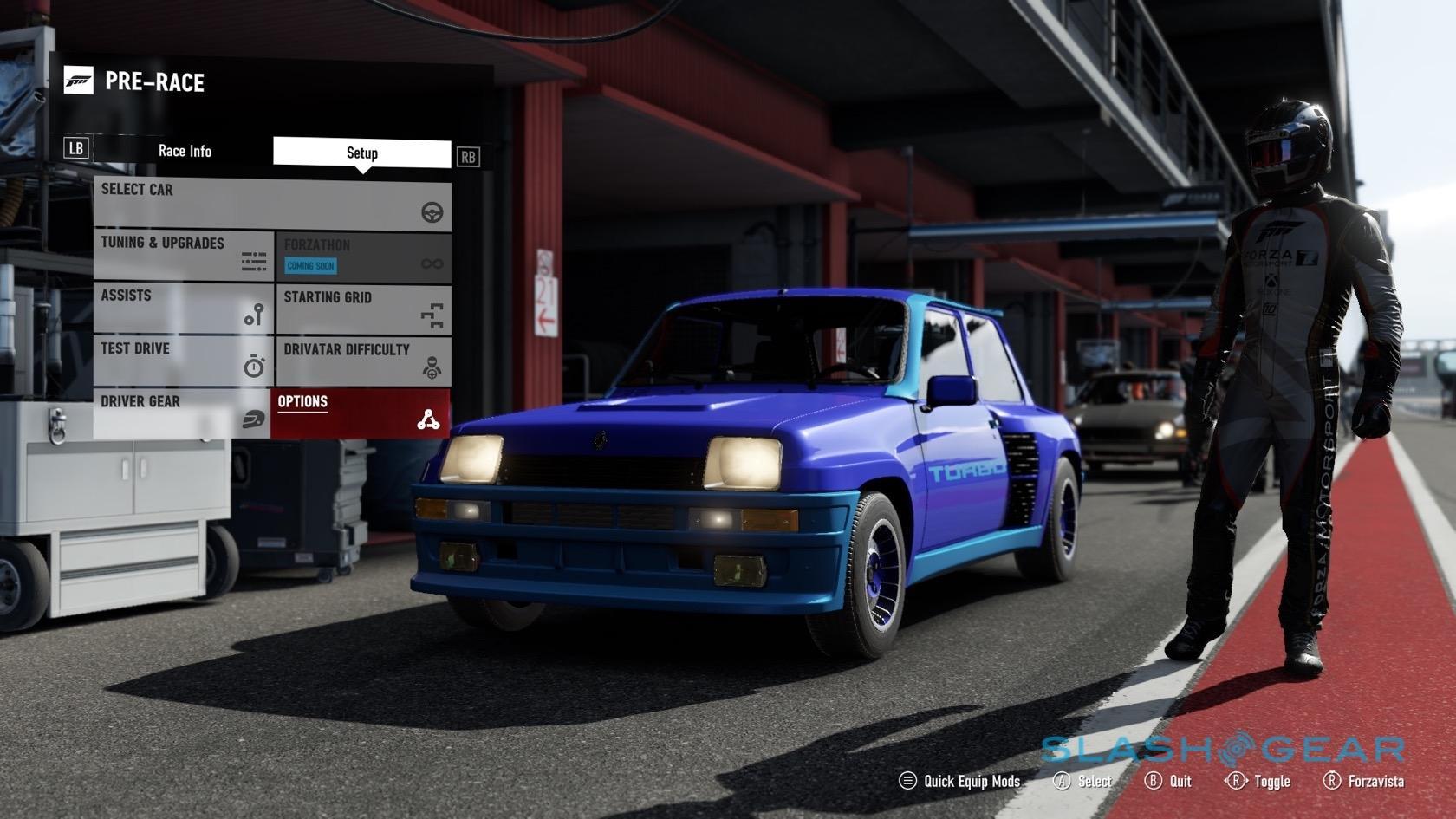 That’s particularly critical for long races such as Spa-Francorchamps 100 in the Corvette C7.R. The 23-lap race takes over an hour to complete, and the tires and fuel you start out with simply won’t last the duration. So, when is the appropriate time to pit? Certainly not on the second-to-last lap, since it takes about five laps to catch the leader after the rolling start. The lack of guidance to someone new to the game will be a detractor as there’s nothing worse than running out of fuel after spending an hour fighting for first place. 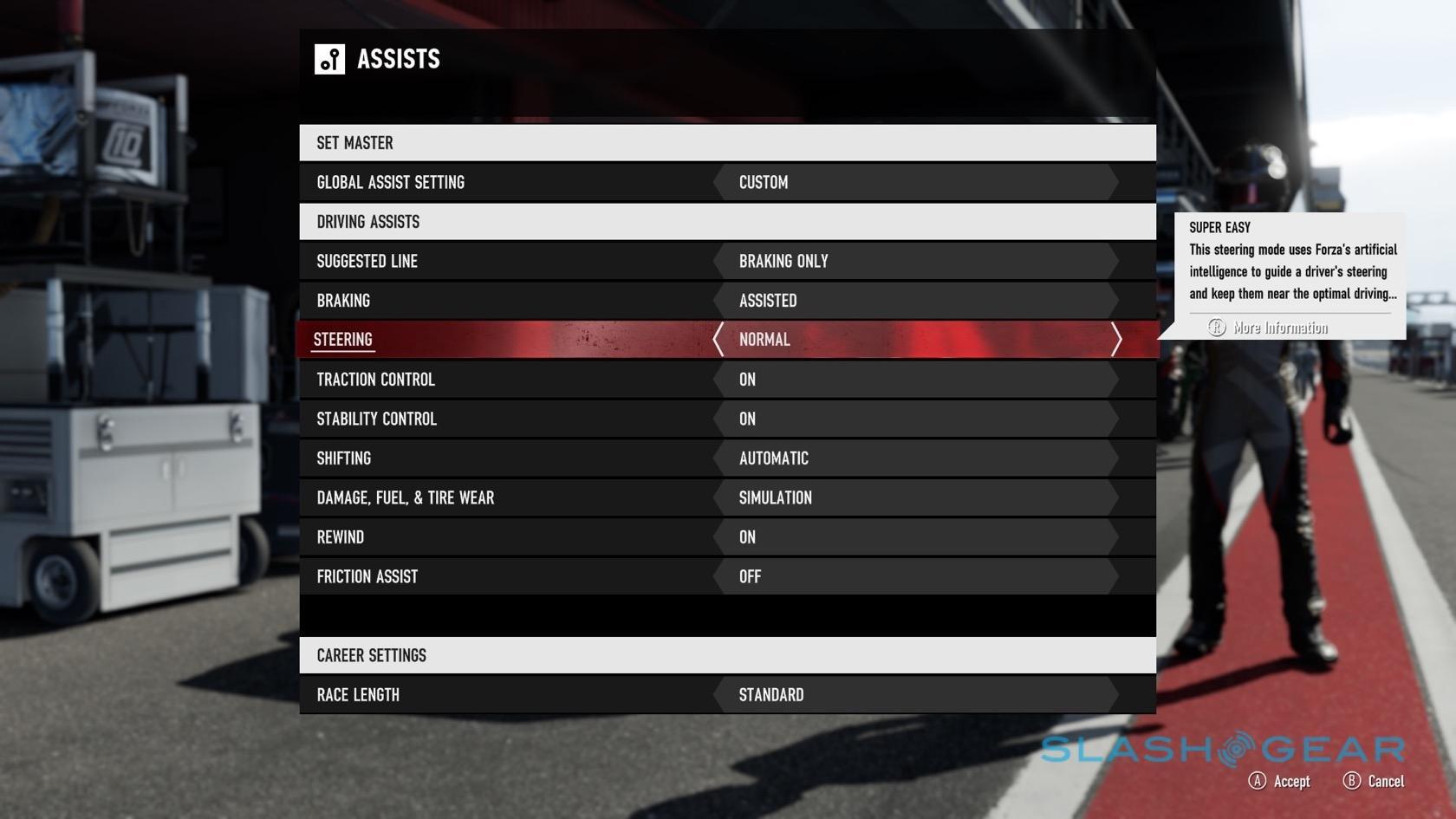 The other thing that’s missing is headlight control. On some of the tracks, there are some long tunnels, and I’ve noticed that the headlights never want to turn on. So you have to race through the dark tunnels.

Forza 7 is clearly a demanding title, and the Xbox One is showing its age. During some races, and even in the menus, there’s noticeable lag and sometimes the frame rate drops. I’m betting the Xbox One X will fix these issues. All the same, it’s a little disappointing for those that don’t want to spend the money on a new console simply to properly enjoy the game they bought. 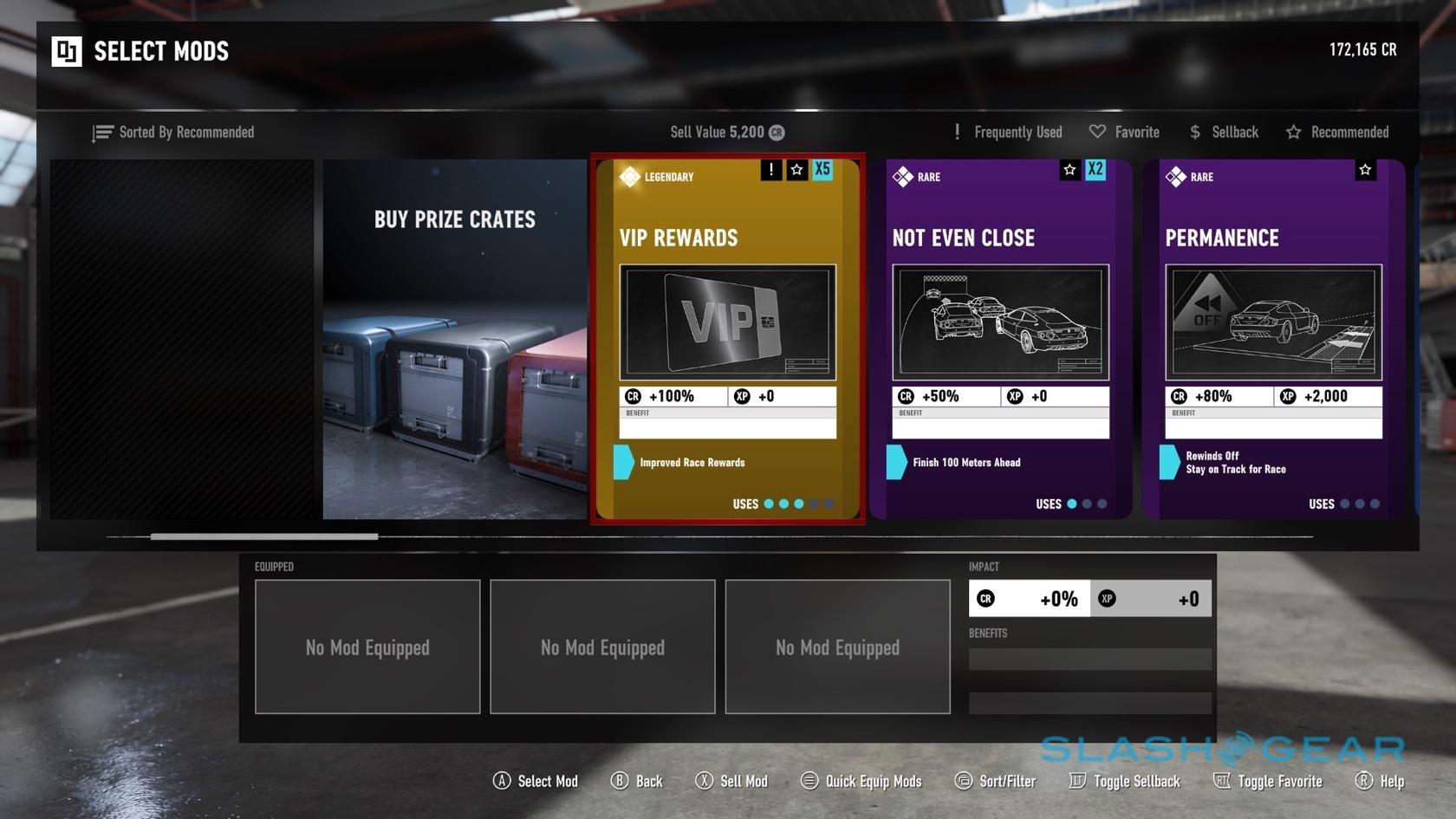 The VIP system has also taken a hit. Since Forza Motorsport 5, picking up a VIP pass meant double racing credit bonuses. With Forza Motorsport 7, however, they have replaced that bonus with five special VIP mod cards. The cards only have a limited number of uses before they expire. In previous versions of the game, players could turn off driver assists to earn better rewards, too, but these mod cards have also replaced that.

Should I add it to my collection?

This is one of the highest-rated Forza Motorsport games to date. Turn10 built it new from the ground up, and it shows. The level of detail on the cars and the tracks is awe-inspiring, and frankly there’s no other Xbox game today that comes close. 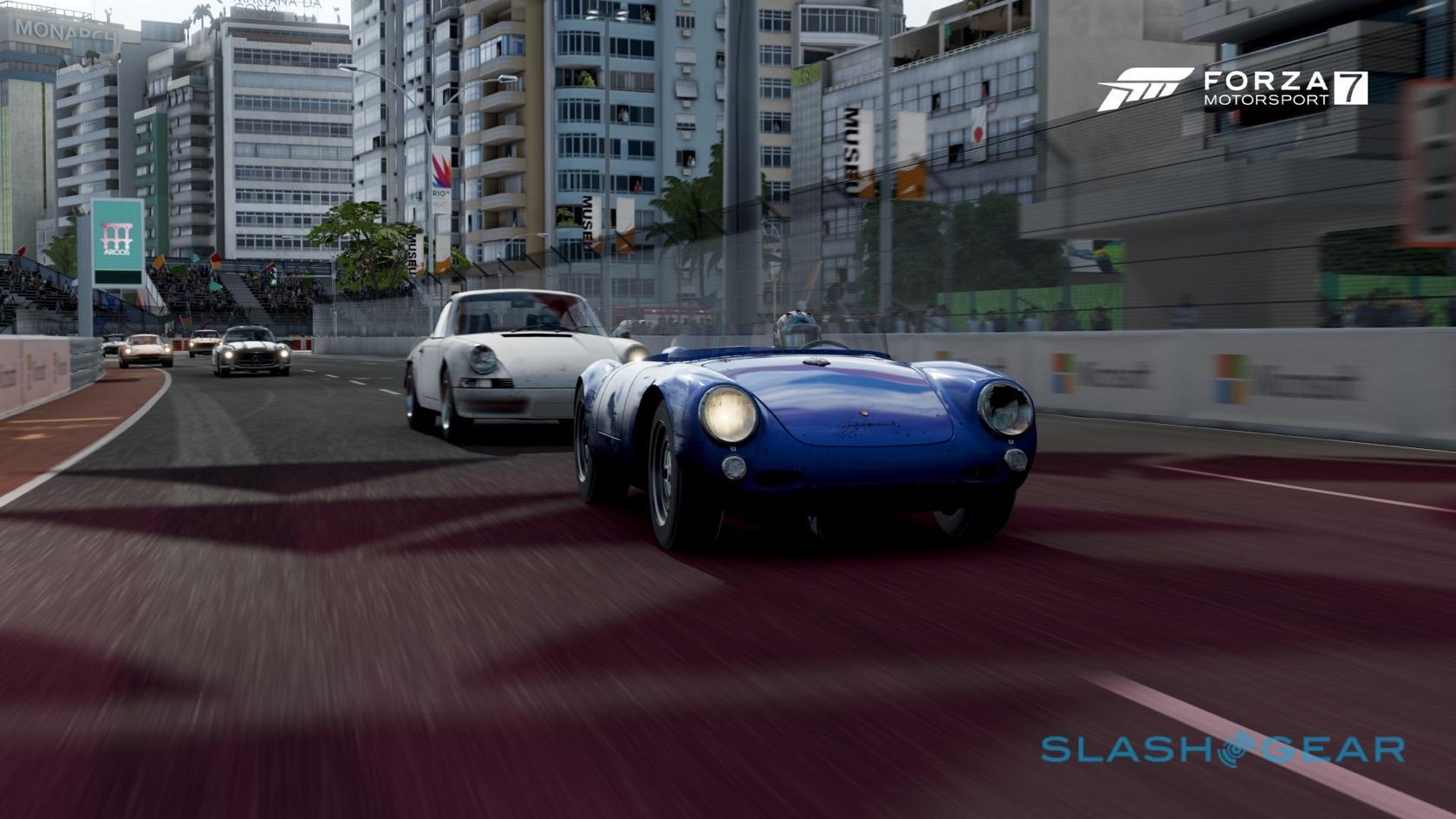 The dynamic player options make this game approachable to any skill level. While some newcomers might feel frustrated with the lack of support while tuning cars, the absence of an engineer to help during endurance races is a bigger omission. Certain aspects of racing are obvious and are easy to learn as you spend more time playing, but others are not so. That’s doubly-so when it comes to complex thing such as spring rates and camber.

Not only will you be spending real cash on DLCs but also loot boxes. Turn10 is making it easy to part with your hard-earned money. Be prepared for hours of incredible racing, while buying up some of the best cars on the planet, and tackling some of the most challenging tracks in the world. 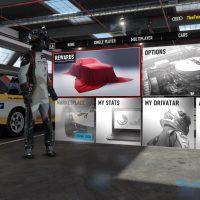 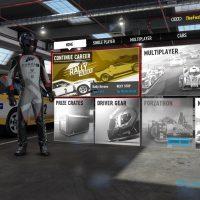 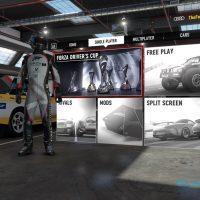 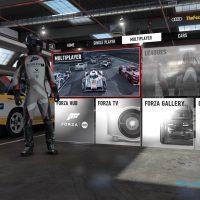 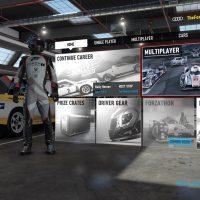