Sitting in a parking lot across the street from the convention center was a driving demonstration from Ford. They were here at CES 2014 showing off the Vehicle-to-Vehicle Communication technology, which is also referred to as V2V. Put in the simplest form, V2V is safety related. But to simply use the word safety without diving further into detail does it little justice.

As the vehicle-to-vehicle part of the name would suggest, this setup has the cars on the road sort of talking to each other. Basically, broadcasting signals and making sure they all know where the others are located. Ford was showing a how this setup can be used to help with blind spots, with blind corners and in times when the car in front of you makes a sudden stop.

They also showed how the V2V technology can help to protect you against someone running a red light. Before the driving began, it was made clear the demonstration wasn’t making use of any radars, camera or lasers. Instead the cars being used were sending out signals using short range radio, DSRC, WiFi and GPS. The information being sent includes your current position, heading and speed. And for those worried about privacy, the data being broadcast is anonymous. 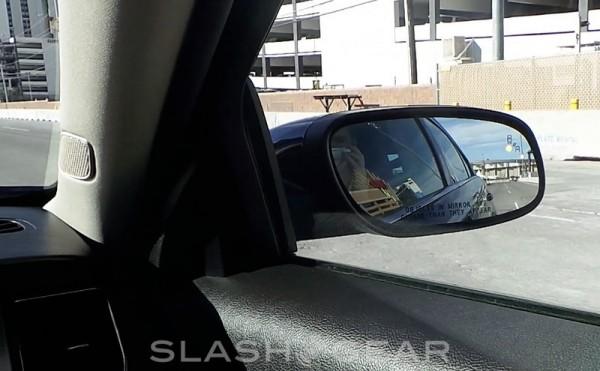 As we were told, this is basically about, “am I going to hit you or not.” One of the key points we should make clear — this does not take control of the car in any way. The driver still needs to be alert and still needs to hit the brake, or avoid moving over. The Ford V2V technology is a warning system that makes use of an audible sound, LED lights in the dash, an indicator on the side mirror and also with haptics located in the seat. To that point, the seat vibration will be narrowed down to the left or right side depending on where the potential trouble may be located.

Keeping in mind that we were being driving on a closed course with a group of three Ford vehicles, the demonstration provided did give us confidence this would be beneficial in a regular driving situation. There are some drawbacks though. For one you need to get this in cars, but there could also be an issue with overcrowding. Or maybe more accurately, with oversaturation of the network if you are in a congested area. Anyway, while you’re not going to feel the vibration in the seat, the video sitting below will give you a better idea of how it works.