Mustang55 makes the same 450 PS as all other V8-powered Mustangs. The Mustang55 package is a visual one with black stripes on the hood and sides of the car. The car gets black wheels and a two-tone black upper and lower grille treatment.

The 5.0 badges on the front fenders are in black with a red dot. Buyers can get the car with an optional black raised boot-lid spoiler. Inside the car is a carbon-fiber effect dash insert and leather-wrapped center console and knee bolster area with gray stitching. The car comes in convertible or fastback styles and comes with the B&O sound system and remote start for automatic models and remote locks for both models.

Mustang55 comes with a 6-speed manual or a 10-speed automatic with both offering custom shift knobs. Ford has also announced new Shelby-inspired styling for the Mustang 2.3-liter EcoBoost convertible and fastback models. Door mirrors and boot spoiler are in Magnetic gray with dissolve-effect bonnet stripes. The cars get a California grille that has a tri-bar pony badge and machined 19-inch wheels. 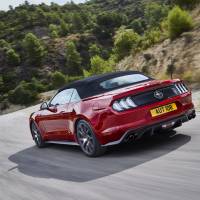 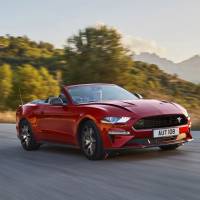 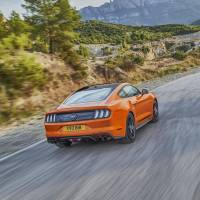 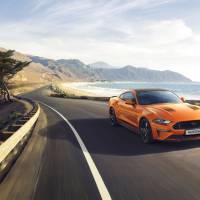 The Active Valve Performance Exhaust is now standard. The cool part about that exhaust system is that it can be programmed to use quiet modes at specific times of day to prevent you from waking the neighbors when leaving for work. Ford is also talking up sales of the Mustang having sold 113,066 in 2018. In the first half of 2018, it sold 5,500 in Europe.