For me, Carrie Fisher’s Leia was more than just ‘one of the boys’

I was somewhere around age 7 when I first saw A New Hope, then just known as Star Wars, and it ignited many things in my young mind. A love for storytelling, a love for science fiction specifically, and the stubborn insistence that lightsabers must exist somewhere regardless of what everyone said. It wasn’t until I watched Return of the Jedi, though, that Star Wars — and Carrie Fisher specifically — revolutionized my understanding of life and my place in it.

Star Wars was many things to me — a classic battle between good and evil, hope that the underdog could persevere against seemingly impossible odds, and, of course, a fun look at an imagined distant future. A New Hope reflected the world I’d perceived and known up to that point: boys having fun and being important and the one token girl being, well, a princess. An admittedly badass princess, but still.

It wasn’t that I didn’t appreciate the Princess Leia presented in A New Hope, but I didn’t see anything outside of what I knew as normal. She was exactly what I expected the princess to be. Luke was the special Jedi who got a lightsaber and a vital role in changing the galaxy. Han had a huge ship and all these connections amongst many worlds. Princess Leia needed help.

I’d declared at a young age that I wished I was a boy because boys were important and got to have the most fun. I had this idea of what a princess was, and it involved a hefty dose of forced helplessness. Being a girl meant having a lot of pink toys and being admonished about all the things that weren’t ladylike, and while that didn’t describe the Princess Leia of A New Hope, I figured she’d had to put up with all that stuff, too.

Princess Leia was okay, but I wanted to be Luke Skywalker. And so I felt like someone must have made a mistake and I was supposed to be a boy. There couldn’t be any other answer, I’d figured. 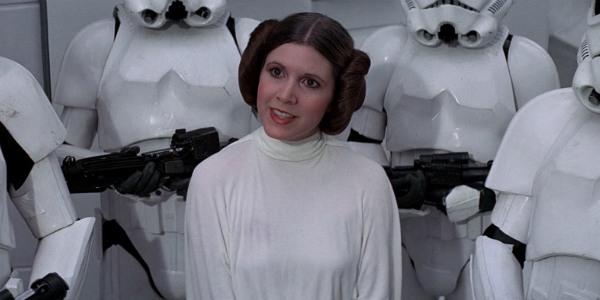 Fast-forward to Return of the Jedi and the plot twist that my young self never saw coming: Luke had a sister, and that sister had the Force, and that sister was Princess Leia. To most adults it seemed like a somewhat cheesy twist, given the love interest angle of the previous movies, but to me it was something else entirely: the very first moment I realized girls could be just as special as boys. She wasn’t just a princess tagging along with the boys, she was just as important as them.

Fisher’s role in the Star Wars world took on a new form in Return of the Jedi, and she steered it masterfully. Princess Leia wasn’t just a stereotypical princess, and at the same time she wasn’t a stereotypical “one of the boys” character who tried too hard to be masculine as if the feminine aspects of her personality were shameful.

This point was driven home during the Endor battle scene in which Leia was both warrior and nurturer, being able to hold her own against Imperial forces without needing the boys’ help, and at the same time being gentle and loving toward the ewoks and, later on, having no qualms about donning a dress and braiding her hair.

In light of Fisher’s passing, many narratives about her life will no doubt arise across social media in coming days. Many can’t seem to help pointing out her past drug use, and others dismiss her as just an actress. Like Leia, though, she was more than any single one thing: she was a person who lived a complex life, and she wasn’t afraid to be herself. Her influence will ultimately outlive any single narrative that may arise, and she’ll no doubt continue to influence young viewers for years to come.