There’s a category of technology that is still more or less in the fringe – the kind designed to improve one’s own physiology, exceeding typical limitations via devices that enhance our biology. One type of this technology is called a tDCS headset, which stands for Transcranial Direct-Current Stimulation and is meant to provide neurostimulation via low-level currents and electrodes. The Foc.us headset provides such a feature, but is designed specifically for gamers.

Calling the device a gaming headset isn’t entirely accurate, because it offers nothing that makes it game-specific. Rather, those behind the Foc.us device are marketing it at gamers, saying it will “overclock” players’ brains, causing synapses to fire faster and increasing brain plasticity, among other things. By doing so, Foc.us says users will “get the edge in online gaming.”

The way the device works is straight-forward, and the technology involved has been the subject of study for many years. The headset contains a battery and four electrodes, which can be placed in various locations by the user. By placing the electrodes in vertical pairs a tad over the eyebrows, the headset is said to stimulate the prefrontal cortex with painless electrical currents. 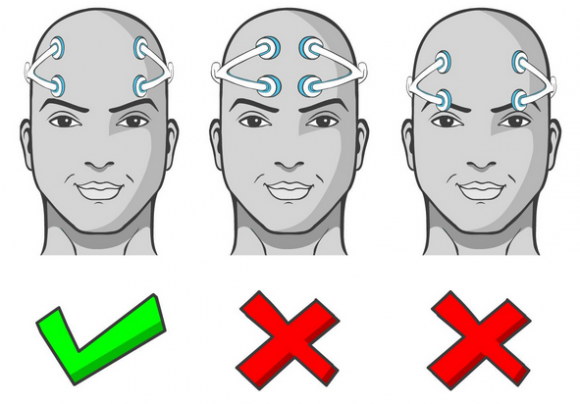 The device offers both cathodal and anodal prefrontal cortex stimulation, and by default offers gamers a 1mA current for 5 minutes. That time can be adjusted up to a 40 minute session, however, in various time increments, with the current range going from 0.8mA to 2.0mA. Foc.us says it offers a “crescendo start” so that it is comfortable for gamers.

The headset is controlled via an iOS device, such as an iPhone or iPad, with an app available for download from the App Store. The device uses Bluetooth 4.0 when working in conjunction with an Apple device. Unfortunately, there’s bad news for Android users – your devices won’t work, the reason given being the lack of “necessary Bluetooth low energy apis.” You’re not totally left out, though, because the Foc.us headset has an on-device touch sensor for certain manual controls. You won’t be able to do some things without a mobile, however, like increasing the session duration.