I can’t believe I’m going to do this. I’m going to defend the right to own guns. You see, I’m a liberal. I’m more liberal than you are. I don’t care how liberal you think you are, I’m more liberal than you. But I also pride myself on my ability to change my mind with a reasonable argument, so there are a few positions on which I agree with conservatives. Teacher’s unions, for one thing, are pure evil. I know that from my experience working in public schools, where my job was made much harder by teachers who were resting on union protections and doing a horrible job. On gun ownership, as well, I’m confounded to say that I tend to agree more with the right-wing than the left.

Joe Brown, chief at Gizmodo, penned a brief editorial about how guns are a gadget too dangerous for normal civilian use. He makes an excellent point for geeks, mostly concerning time machines. But his column is too brief for the topic at hand. Joe, let me show you what a thousand words looks like, because it would be impossible to flesh this out in the space you’ve allowed yourself.

So, Joe’s basic premise is that every sci-fi movie that involves time machines basically concludes that time travel is too dangerous for us normal humans. Except he forgot the canonical time traveling opus, Doctor Who. If anything, Doctor Who proves quite the opposite. The good Doctor emphatically solves his problems with little to no violence, and usually folks he encounters leave all the wiser for being in his presence. Sure, he’s not human, but the show’s writers sure are, and that’s what we’re really talking about. Joe thinks it’s impossible to even imagine a scenario where such a dangerous technology should be left in the hands of humanity. Our greatest thinkers, Joe implies, cannot conceive of a world order preserved with time travel as a natural part. But that’s just not true. Doctor Who. Marty McFly. That one Harry Potter book, the really good one (the best one, in my opinion). All involved time travel, and everything worked out for the best.

So, let’s leave the fiction world behind. It is impossible to argue that guns are not dangerous. They are tremendously dangerous. They offer the maximum amount of damage for the minimum amount of intelligence. I could put my 3 year old behind the wheel of a car, and he would have trouble figuring it out. But if I hand him a semi-automatic pistol, I’m sure he could kill something with ease.

I should also assert my liberal bona fides. If all guns disappeared tomorrow, I would not shed a tear. If the government somehow came to its senses and banned all firearms, from automatic assault rifles down to black powder muskets, I would applaud the decision and vote for any representatives supporting it. However, as long as guns are currently legal, I think there are solutions to maintain the status quo that do not involve a full-fledged ban.

That ship has already sailed, after all. The guns are out there. They are easy enough to get. A gun ban would certainly stop some criminals from acquiring firearms, but not all, and probably not even most. Other countries still make guns. Heck, anyone with a 3D printer at home can now print working guns for themselves, without a license or waiting period. I can’t think of any technological development more frightening than that. So the genie is already out of the bottle. Guns are here, and guns are easy, and we have to deal with that fact.

Exactly one week before the shooting at the movie theater in Colorado, I fired an assault rifle for the first time. It was an AR-16, the same weapon the shooter used (one of many, in fact). The rifle belongs to a friend of mine here in Texas, a very sweet and gentle family man who grew up in rural Idaho. We had planned the outing to the shooting range for a while. When the day came, I asked if he needed to stop home after work to pick up his weapon.

“No, I’ve got about a thousand rounds already.” Hollow point rounds. You need to use hollow points at a shooting range so you don’t obliterate the targets. When we got to the range, I had to buy a membership and watch a 10-minute safety video. The range took safety very, very seriously. When I heard the tremendous report of the guns being fired, I asked my friend if he had earplugs he could lend me.

“No, but you can just use a couple bullets.”

“Yeah, just stick them in your ears. I used to do that all the time when I was a kid.”

Instead of sticking live ammunition in my ears with the bullet facing my brain, I convinced him to give me a couple bucks to rent a pair of ear covers.

I have to admit, it was an awesome experience. For a first-timer, I did fairly well from a scant 50 yards. I chalk that up to extensive video game experience. Firing an assault rifle is exhilarating. It’s tremendously powerful, but smooth at the same time, thanks to the large spring that runs through the stock and catches much of the recoil. It took concentration and precision. It involved a loud bang, smoke, and heat. There’s a slight element of danger, but also the reassurance of knowing that if you follow the proper rules and procedures, nobody will get hurt.

Should we ban everything that could possibly hurt us? Should be ban only the things that could hurt us the most, with the least effort? Our laws currently establish a right to own guns, and I, as a responsible and intelligent citizen, have no problem exercising and enjoying that right. I don’t want to hurt anybody. I don’t want to see anybody get hurt.

I think gun opponents are going about this the wrong way. We do not need gun control. Such a thing makes little sense. We need human control. We need to control the humans who have access to guns, the way guns are used and stored, and places in which guns are accepted. But mostly, we need to change the way we talk about the issue. When you tell a gun enthusiast you favor gun control, they think you are taking away not only a favorite pastime. You are also taking away a form of protection and safety.

My friend with the assault rifle owns 10 30-round magazines. He could carry 300 rounds on him without having to reload a clip. When I asked him why, he said

“Well, I was buying only a few clips, and the guy selling them to me explained that a clip is inexpensive compared to the price of the rifle itself. So, you might as well buy a bunch. Because when the s*** goes down, you’re going to want those extra clips.” 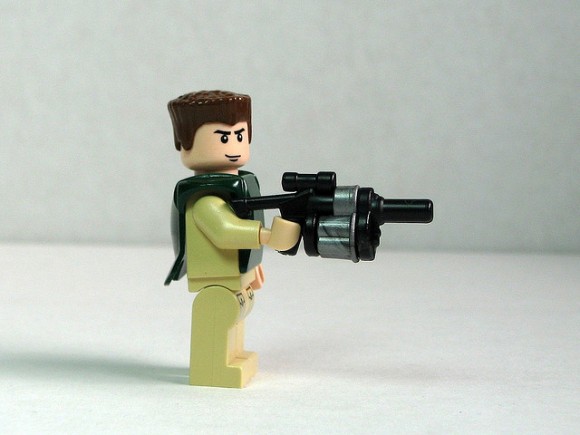 When it goes down, indeed. I have no statistics to back up whether gun ownership results in safety or tragedy. But I do know that gun owners legitimately feel their safety is being compromised when you suggest taking away their guns. And if they have never used their guns improperly, or in a harmful manner, why should they have to sacrifice their right to ownership?

Instead, let’s put technology on the case. Let’s stop calling it gun control, and start calling it criminal control. Nobody will defend making it easier for dangerous criminals to own guns. Let’s extend waiting periods dramatically. Take the passion out of gun purchases. Leave time for a proper background check, using all the tools of the Internet to get a clear picture of the person purchasing the weapon.

Let’s accelerate the development of biometric gun locks. Only a registered owner can use a gun. Let’s develop new ways to keep guns locked, secured, and only usable by trustworthy owners. Targeting systems that recognize a clear threat. Chemical tests to make sure users aren’t drunk or high or otherwise chemically imbalanced.

The NRA and its associate organizations like to say that guns don’t kill people, people kill people. It’s an inspired slogan, so let’s see them put their money where their mouths are. If we can’t take away the guns, let’s do more to stop the people. Let’s do everything possible. If guns are the most dangerous gadget, it is time to treat them like a gadget and spend more time developing features and improving security.

We may never be able to completely end the gun violence insanity that has plagued the U.S. in the past few weeks, but at least we can inject some technological intelligence into the gun ownership body, and bring this fever down to a manageable level.