Five gadgets that changed the world for me

From time to time I like to think about the idea of disconnecting from the digital world for an extended period and what I’d miss as a result. In the end, I came up with five gadgets that changed the world for me, products the descendents of which I’d rather not be without on a regular basis. What’s interesting is that for me, the PC didn’t make the list. Perhaps it’s an uber-gadget that just goes without saying or it’s just not that important to me personally anymore.

Treo – I first used a preproduction Treo at the end of the 2001 and wrote my first review in the January of 2002. It wasn’t the first device to merge a Palm OS handheld with a phone but it was arguably the first device that did it well enough to be used on a regular basis. Treo bucked the trend at the time by eschewing multimedia features; there was neither movie-clip playback nor MP3 audio support. Rather, it targeted business users, merging voice and data with personal information management functions and it did it well. Other devices of the era tried to integrate these functions, but they failed because they tried to add either telephony features to PDAs or organizer features to phones and neither approach worked well. Treo was the first device that successfully merged features in harmony, producing a sum that was greater than its parts.

Things that we take advantage today were part of the Treo experience. Flip it open and your speed-dial list was ready to be used. Tap a few keys and you could instantly find the contact you wished to call. All the familiar Palm applications including an e-mail client, Handspring’s Blazer Web browser and an SMS application were present. Take a look at the iPhone’s dialer and you’ll see the direct descendent of the work Handspring did a decade ago. Treo no longer defines state of the art but most devices that are state of the art today would not be here without Handspring’s efforts and the smartphone you might dread to leave behind is the direct heir to the original Treo.

Contextual functionality ONLY comes together when you get to see the whole, not a piece or part. When you see only pieces, you just get a very expensive VCR not a DVR. And that’s the moniker TiVo was stuck with for many years, an expensive VCR. The reality is that TiVo and later DVRs totally changed the way many of use consume TV and it’s quickly become on the of those indispensable phenomena.

GPS – Whether it was integrated into your vehicle at the turn of the century at a cost of thousands of dollars or an external unit that might have cost only a few hundred, the GPS totally changed the way many of us drive. Whether we took to the streets with a gas station map, or later Mapquest directions, the GPS forever changed how we got from point a to point b. Today, a full functioned GPS might be well under a $100 purchase and if you’re using a phone from Nokia or Google, that feature has now trended down to free. Like watching a TV with no DVR, I find it hard to drive a car with no navigation system but I discover that GPS has come indeed at a price. Once upon a time, if I drove to a new place (with directions) I found that I could easily get back there anytime in the future. The route was now part of my repertoire. With the GPS assisted driving, not so much anymore. I find that I’m paying more attention only to where the next turn is and not the route as a whole. I may be getting to where I’m going better than ever before but I feel less smarter about it overall. 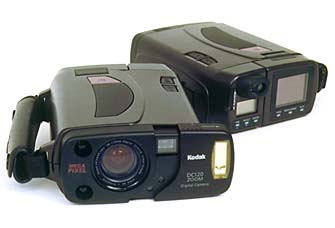 Kodak DC120 digital camera – It wasn’t the first digital camera. Both Apple, Casio and others had models in the market well before Kodak. But the DC120 was a very special camera in 1997. It was the first consumer 1MP digital camera priced below $1,000. It was no paragon of style with a binocular look and a 3X zoom lens, but also had an optical viewfinder and a color LCD. Crossing the magic 1MP threshold at that price meant for the first time consumers could begin to take photographs and print them out with near film-like quality at sizes up to 5×7. The DC120 wouldn’t hold itself well to the most of the cameras integrated into today’s phones but it helped start a revolution for consumers that ultimately paved the way from analog to digital.

iPod –The first MP3 players I used changed the way I listened to music under certain circumstances. Going to the gym, for example, with a Creative RIO was a fantastic experience that let you take a solid workout’s worth of music in a device a fraction of the size of a cassette player. It was the iPod, though, that helped me rediscover music. When the iPod came out, I felt intuitively that there was more to this product than met the eye. Among the first research projects I did in 2002 at Jupiter Research was to understand what about the iPod was special.

It turned out the iPod balanced three critical features for users: battery life/form factor/sync and capacity. It didn’t have the “best” of those features but it had the best balance of them. Mapping into what was the average size of a consumer’s digital music collection of the era, fitting easily into a pocket and able to sync 1,000 songs in minutes not hours (or days) separated the iPod from the pack. There’s of course much more to this story but the bottom line is iPod brought digital music to the masses and personally helped me rediscover music I’d already owned and neglected.

Those are the five archetypical gadgets that make up the digital world that I value most. While none of them would likely be good enough to use by today’s standards, they each set the tone for a revolution in their space. What are the five gadgets that matter most to you, whose modern equivalents you’d be loath to give up?