Ferrari 488 Pista “Piloti Ferrari” is for racers only

Ferrari has a large number of drivers around the world that race the Italian cars in all sorts of amateur and professional series. If you are one of the racing drivers lucky enough to drive a Ferrari in one of the Ferrari motorsports programs, you can order up a new and special version of the awesome 488 Pista.

The special version is called the Piloti Ferrari and has a racing-inspired livery on the outside and some special touches inside. The livery on the car consists of white, green, and red stripes that are inspired by the AF Corse’s #51 488 GTE that ran in the World Endurance Championship last year winning the title.

The livery also has a laurel on the hood marking the WEC title won last season. Other touches on the outside of the car include a matte black S-Duct and spoiler and vent surrounds in exposed carbon fiber. There are four main exterior colors offered including Blue Tour De France, Nero Daytona (black), and Argento Nurburgring (silver), and the Rossa Corsa red seen here.

Each of the cars will have a special identification plaque. The interior is updated with Alcantara seats with Italian flag graphics. The paddle shifters behind the wheel are in red, white, and green colors.

The floormats of the car are also the special color and that is all that changes. The awesome 3.9L V8 still sits behind the driver and makes 710bhp. There is no word on pricing, but anyone who can afford a Ferrari racing car and upkeep for even a single season can afford one. 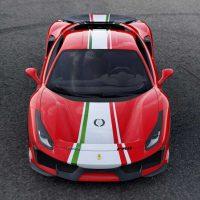 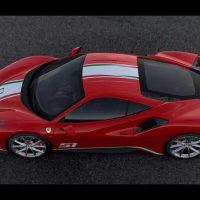 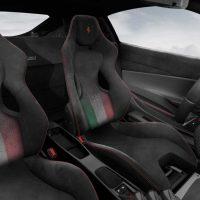 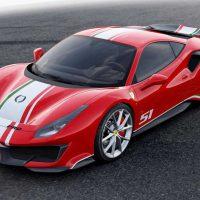