A pink dwarf planet called 2018 VG18 is our Solar System’s most distant object, researchers have announced. The planet, which is informally known as ‘Farout,’ is described as pink in color with an icy environment and tiny diameter. Farout is one of around only 50 dwarf planets in our solar system. The system’s biggest dwarf planet, Pluto, has a diameter of approximately 1,470 miles; in comparison, Farout measures somewhere between 310 and 375 miles.

The discovery was announced by the Carnegie Institution for Science on Monday, revealing that this is the first object in the Solar System found more than 100 times farther than the Earth is from the Sun. The milestone discovery was made by Scott S. Sheppard with Carnegie, as well as Chad Trujillo with Northern Arizona University and David Tholen with the University of Hawaii.

The name 2018 VG18 is a provisional designation at this time, though the nickname Farout is more appealing. The dwarf planet is located around 120 astronomical units, with each unit representing the distance between the Sun and Earth. This distance is compared to Eris, which is now the second most-distant Solar System object at around 96 astronomical units. 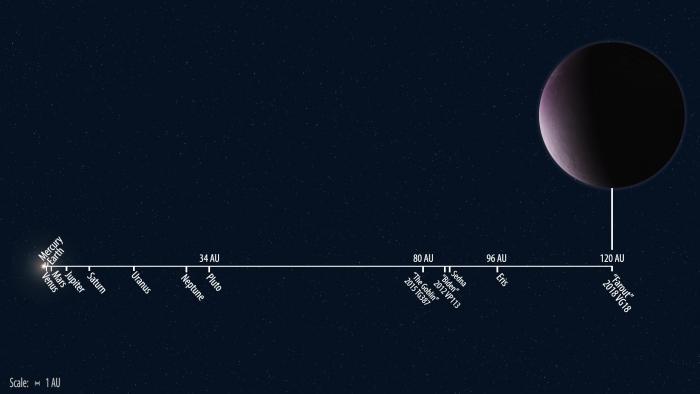 The image above from Carnegie helps put the pink dwarf planet’s distance into perspective. Farout resides about 3.5 times farther from the Sun than Pluto, the Solar System’s biggest and best known dwarf body.

This discovery follows October’s 2015 TG387 announcement, which involves “The Goblin” distant Solar System object spied by researchers around Halloween. Neither it nor the 2012 VP113 discovered 2014 are close enough to the Solar System’s big planets to have any significant gravitational effect.

Details about Farout’s orbit will take time to determine partly due to the celestial body’s slow movement. Thus far, researchers have identified the dwarf planet’s color, distance, and very slow orbit — it probably takes, according to Tholen, over 1,000 years to orbit around the Sun a single time.