Now that Bethesda is owned by Microsoft, we can probably expect a shake-up in some aspects of the company, but it seems that Fallout 76 development is carrying on as it always has. Today Bethesda revealed a broad Fallout 76 content roadmap for 2021, and while we’re expecting more detailed explanations of these updates we get closer to them, the roadmap Bethesda shared seems to hit all of the high points we can expect throughout the year from a perspective of content.

The one exception to that is, unsurprisingly, the spring update, with Bethesda detailing most of the content that’s coming along with this update back in January. Chief among the new content additions will be SPECIAL loadouts and CAMP slots, though players can also look forward to addition of mannequins that will presumably allow them to put their armor sets on display. Season 4 – dubbed Armor Ace in Cold Steel – will debut with the spring update, and Bethesda says that the content is live on the Fallout 76 test server (accessible to those who play via the Bethesda launcher) right now. 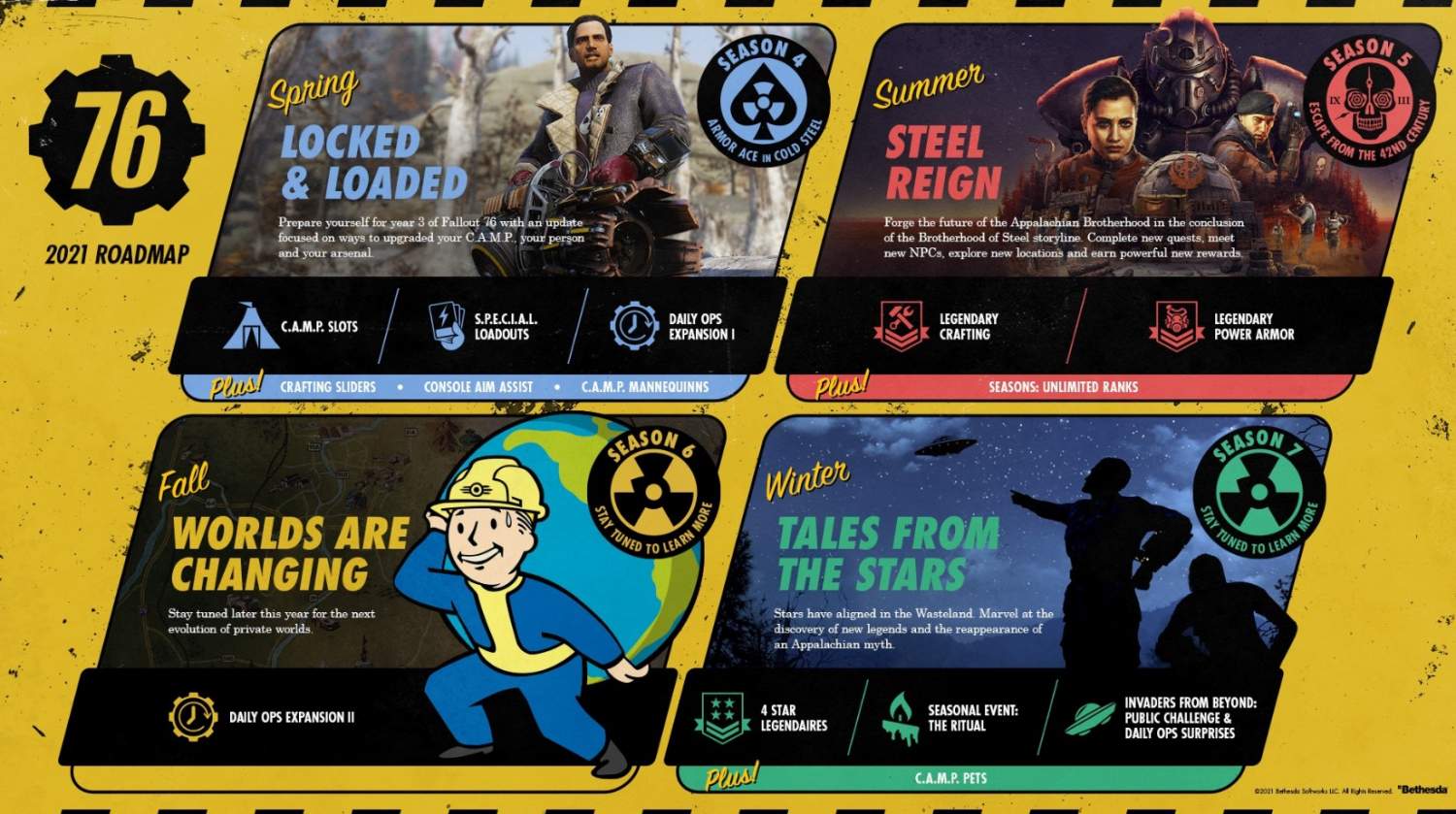 For the summer update, we’ll be getting a conclusion to the story of the Appalachian Brotherhood of Steel arc that started last summer through a new update called Steel Reign. This update will add “all new quests, locations, NPCs, and powerful new rewards.” We’ll also see the introduction of legendary crafting and Season 5, which has been named Escape from the 42nd Century.

Beyond summer, things start to get a little more vague. In fact, Bethesda has only shared a few morsels about fall’s update – Worlds Are Changing – saying that it will serve up an “evolution to Private Worlds” along with an expansion to Daily Ops. Finally, we have the Winter update, which will introduce new four-star legendary weapons and armor, CAMP Pets, a new event called Public Challenge: Invaders from Beyond, and a seasonal event called The Ritual.

Those are all of the details we’re getting for now, but Fallout 76 regulars might want to stop by the Fallout 76 subreddit tomorrow, March 23rd at 11:30 AM EDT to pose their questions to project lead Jeff Gardiner and design director Mark Tucker in an AMA about the game. The AMA will last for an hour-and-a-half and Bethesda says that both Gardiner and Tucker will be ready to answer questions about future content, so it could be worth checking out for Fallout 76 veterans.