Fall Guys: Ultimate Knockout review: A ton of fun, but does it have lasting appeal?

Unless you went underground several weeks ago and are just now becoming one of the light-loving surface dwellers again, there’s a good chance you’ve heard about Fall Guys: Ultimate Knockout. The game has been getting a lot of attention in recent weeks, partly because of a series of closed betas developer Mediatonic hosted before release, and partly because everyone and their mother seems to be streaming it on Twitch at the moment.

There’s good reason for all the attention it’s been getting, too. Fall Guys is a battle royale game that doesn’t really feel like a battle royale game. It’s a party game for anyone who’s watched any kind of game show where participants try to make it to the end of ridiculous obstacle courses and thought “I want to do that.”

Fall Guys, for the moment at least, is a gaming phenomenon. It’s not easy to unseat perennially popular titles like Fortnite, League of Legends, and Minecraft to become the most-viewed game on Twitch, but Fall Guys has managed that at multiple points over the last week. There’s a lot of interest behind this game, but whether or not it will be lasting interest is another question entirely. 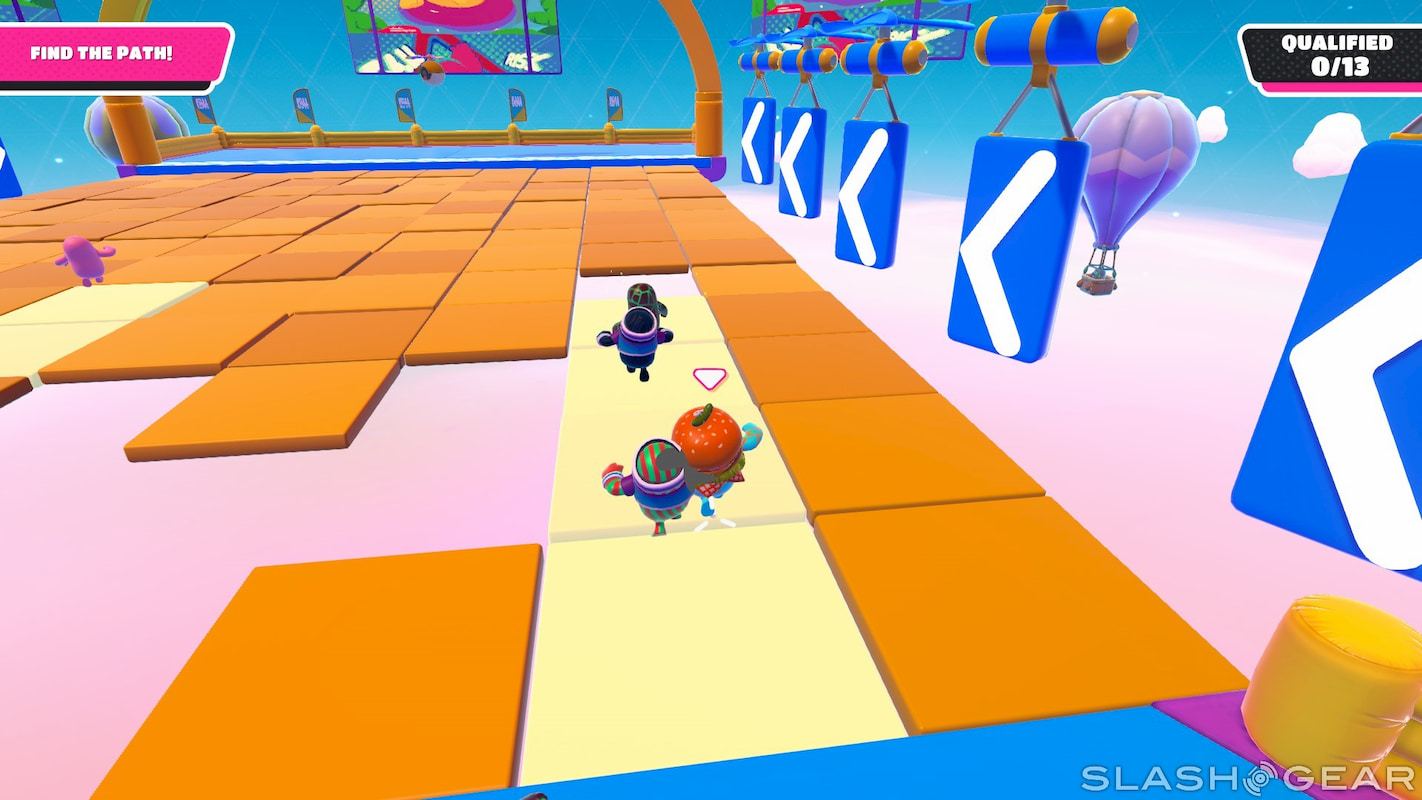 The game puts you in the titular role of one of these Fall Guys and drops you into 60 player matches where everyone is trying to avoid elimination through multiple rounds of a game show. In some rounds, you’ll be working your way through obstacle courses, contending not only your own platforming skills, but also other players as they bump into you, grab you, and knock you over. In these courses, you’re as much at the mercy of other players as you are your own ability.

Other rounds might have you competing in team-based challenges. Some of these challenges include trying to steal tails off the rear ends of competing players, or trying to sink oversized soccer balls in the other team’s goal.

At the end of each round, a certain number of players are eliminated. If you make it to the final round, you and the few surviving players will compete to be the last person standing, which is where Fall Guys‘ battle royale roots become clear. 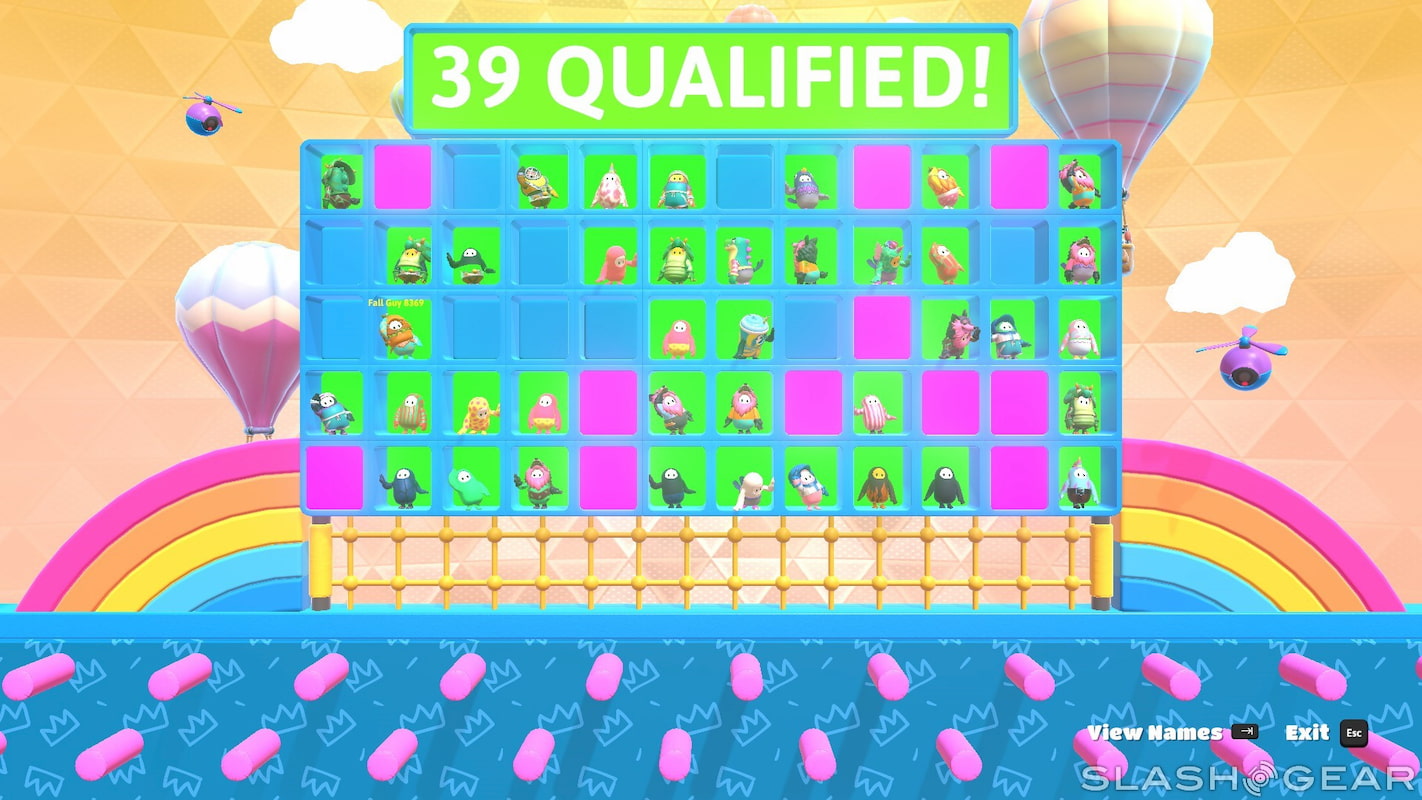 Fall Guys is a very simple and straightforward game, and yet there’s a certain amount of strategy to each match. In obstacle course rounds, for instance, you could try to dash to the end with the horde of players and hope you can stay on your feet as all of the others swarm around you. On the other hand, you can hang back behind the pack and have an easier time navigating through the obstacle course, with no guarantee that you’ll actually make it to the end in time if everyone else plays well.

While there are ways to be strategic about your approach to Fall Guys, at its core, it’s still party game. It’s meant to be a casual title that anyone can pick up and play, and it succeeds at being that with flying colors. Fall Guys is a fantastically fun time, even if you’re playing on your own. This is definitely a game that’s better with friends, but contrary to what I’ve seen some other people say, I’ve also been having a blast with it solo. 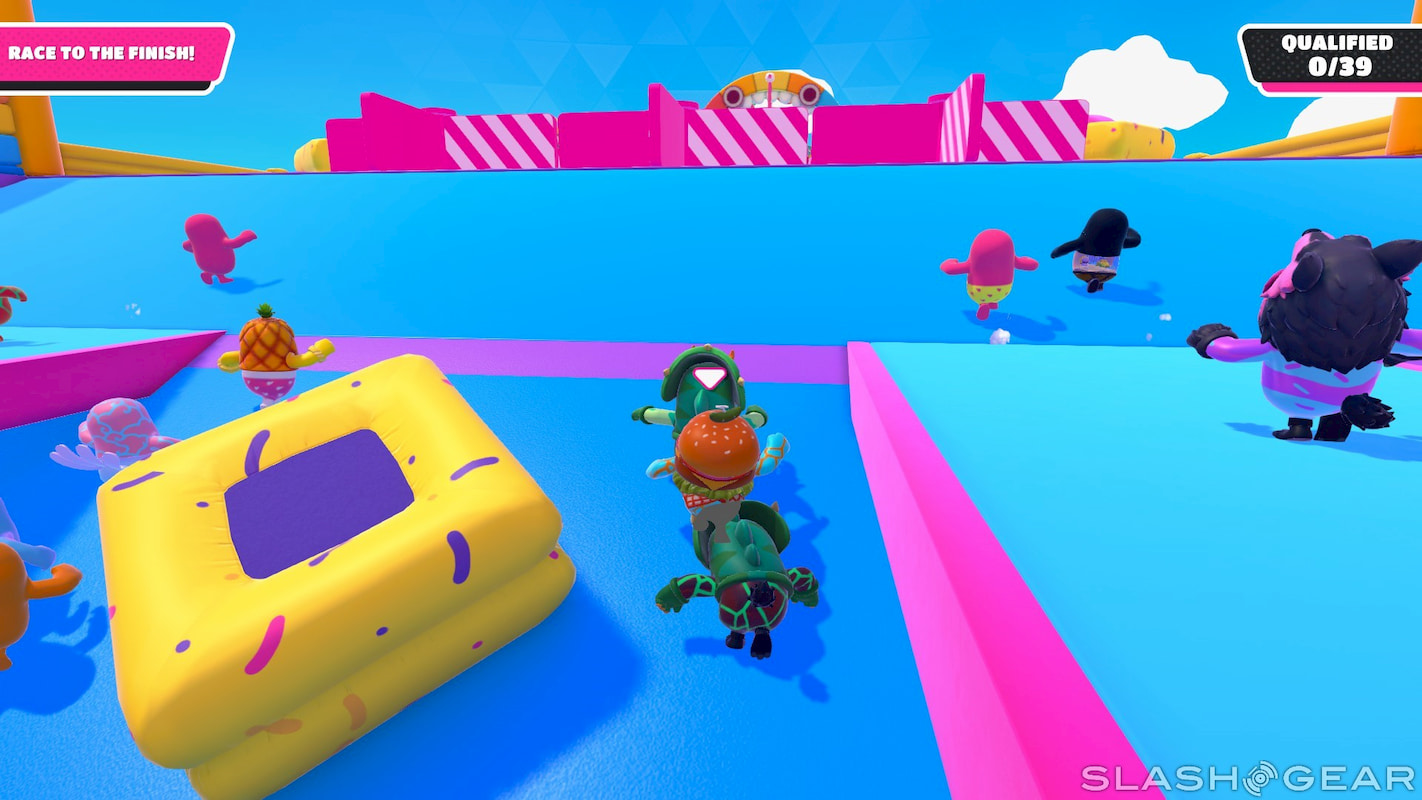 I do have my concerns, though. Matches tend to move quickly in Fall Guys, and while that’s great for a pick-up-and-play game, it also means that before long you’ll begin to feel like you’re playing the same minigames over and over again. That’s especially true if you don’t often make it deep into your matches, as there seem to be only a few obstacle courses that are meant for the first, 60-player round.

Fall Guys, therefore, has a tendency to get stale fast for those who play a lot of it. Indeed, I’ve found that Fall Guys is best as a “small doses” game that I can pick up for 20 or 30 minutes at a time. I think attempting to binge the game might lead some players to feel burnt out.

Developer Mediatonic can avoid that feeling of burnout by frequently adding new courses and minigames, but I wonder how quickly the studio can do that. A consistent stream of fresh courses (perhaps even a rotation that sees older courses disappear for a time) will help keep interest in the game high, but right now, Fall Guys may not have the breadth of content needed to keep it from sizzling out. 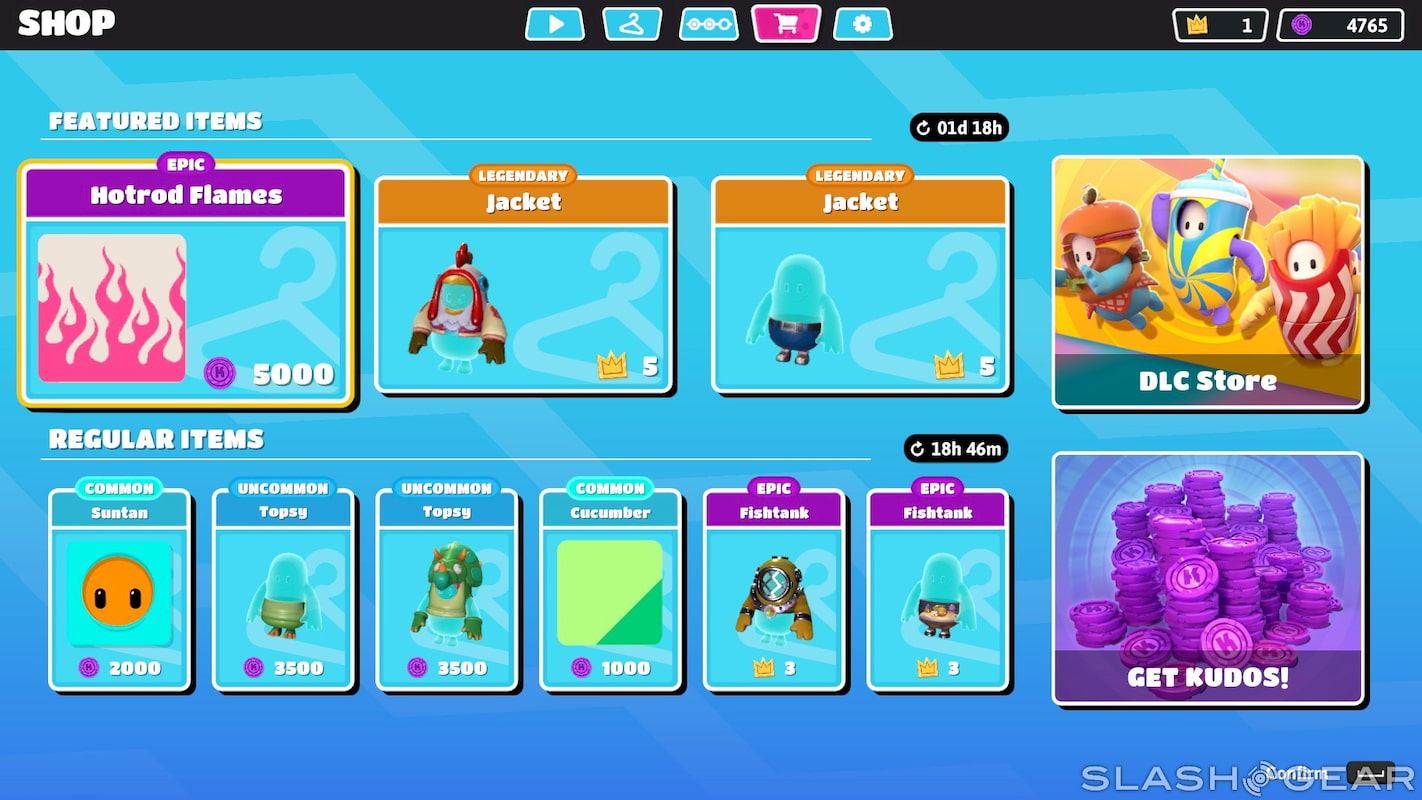 I’m also not a fan of this game’s monetization. I feel like a broken record at this point, but I hate games that try to double dip by charging you up front and then selling cosmetics through an in-game shop like it’s some kind of free-to-play game, which is precisely what Fall Guys does. Fall Guys‘ shop actually looks a lot like Fortnite‘s, as the items that are on sale rotate regularly.

It wouldn’t be so bad if Fall Guys‘ in-game shop sold you an entire costume when you make a purchase, but it doesn’t. If you want a complete costume, you’ll have to buy the top half and the bottom half separately. It’s hard to look at that and not feel cynical about it.

Still, even with my hesitations concerning the shop, you can at least earn one type of currency – crowns – by winning games, which means that you won’t necessarily need to spend money to acquire new skins (assuming, of course, that you can actually score some wins).

To be fair to Fall Guys and Mediatonic, it’s not like we’re being charged full retail price here; Fall Guys costs $20 on PC and is currently free on PlayStation Plus, so on paper, the in-game shop is a little more acceptable. To me, though, Fall Guys feels like a $20 game. I think I paid what the game is worth (I purchased it on PC), so with Fall Guys in its current state, the in-game store just comes off as greedy. 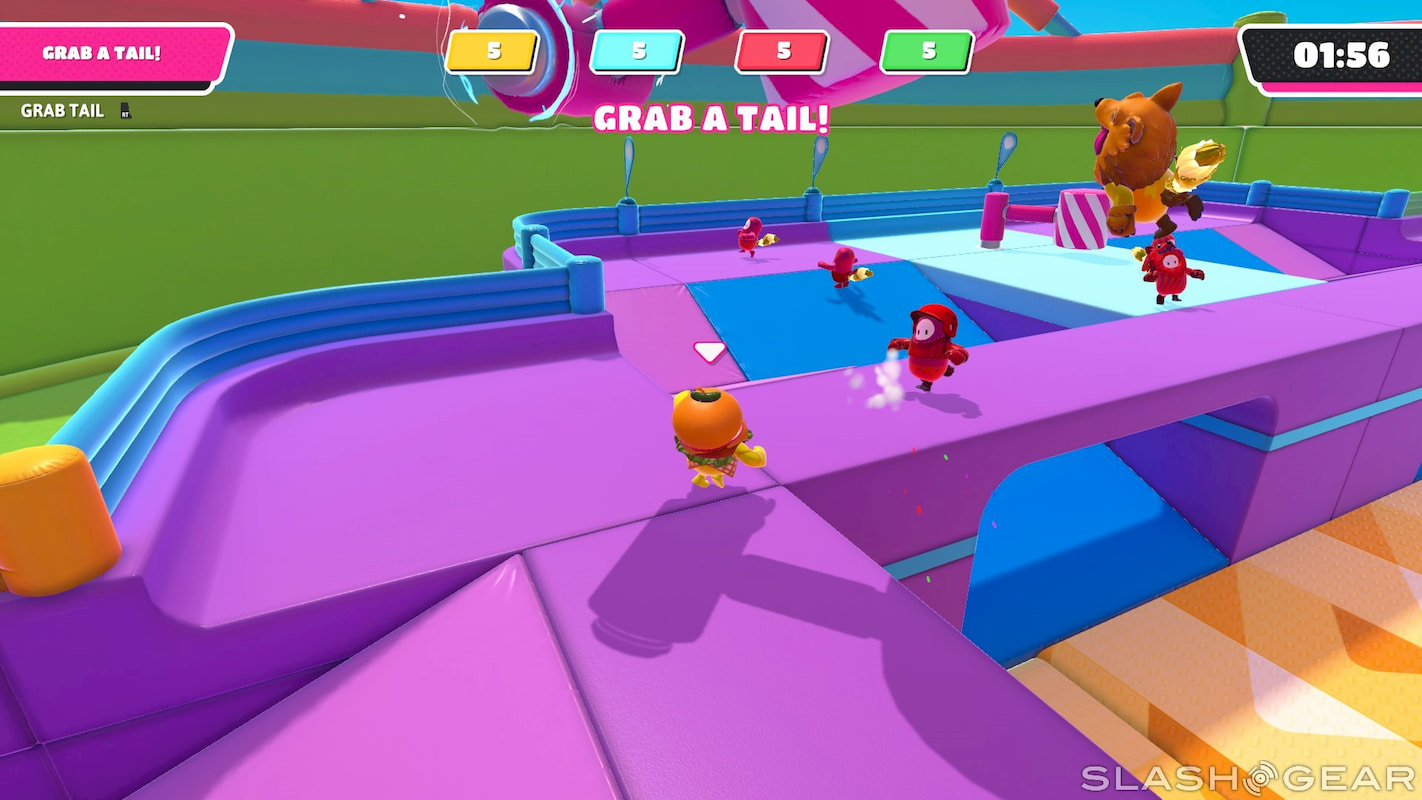 There are also a few minigames in Fall Guys that are just straight up bad. I don’t think it’s controversial to say that Perfect Match is one of the more despised minigames in Fall Guys, because not only does this slow match game feel out of place among the other, more hectic games, but it’s also super easy and hardly ever results in any significant number of eliminations. The last two or three times I’ve played Perfect Match, I don’t think anyone has been eliminated, so what’s the point of playing it in the first place?

While Perfect Match is the only game I think should be removed entirely from Fall Guys, there are others minigames that aren’t very good. I don’t really like any of the tag games, particularly when you get their team-based variants. Whenever those team tag games come up in the rotation, I find myself wishing I were playing any of the other team games like Fall Ball, Hoarders, or Egg Scramble.

Those criticisms aside, I’m having a hard time coming up with any race/obstacle courses that I don’t like. Even though some, particularly Seesaw, never fail to get my blood pressure rising, they’re all fun and really well-crafted. The majority of Fall Guys‘ minigames are good, and I’m actually surprised there aren’t more bad ones on the roster. 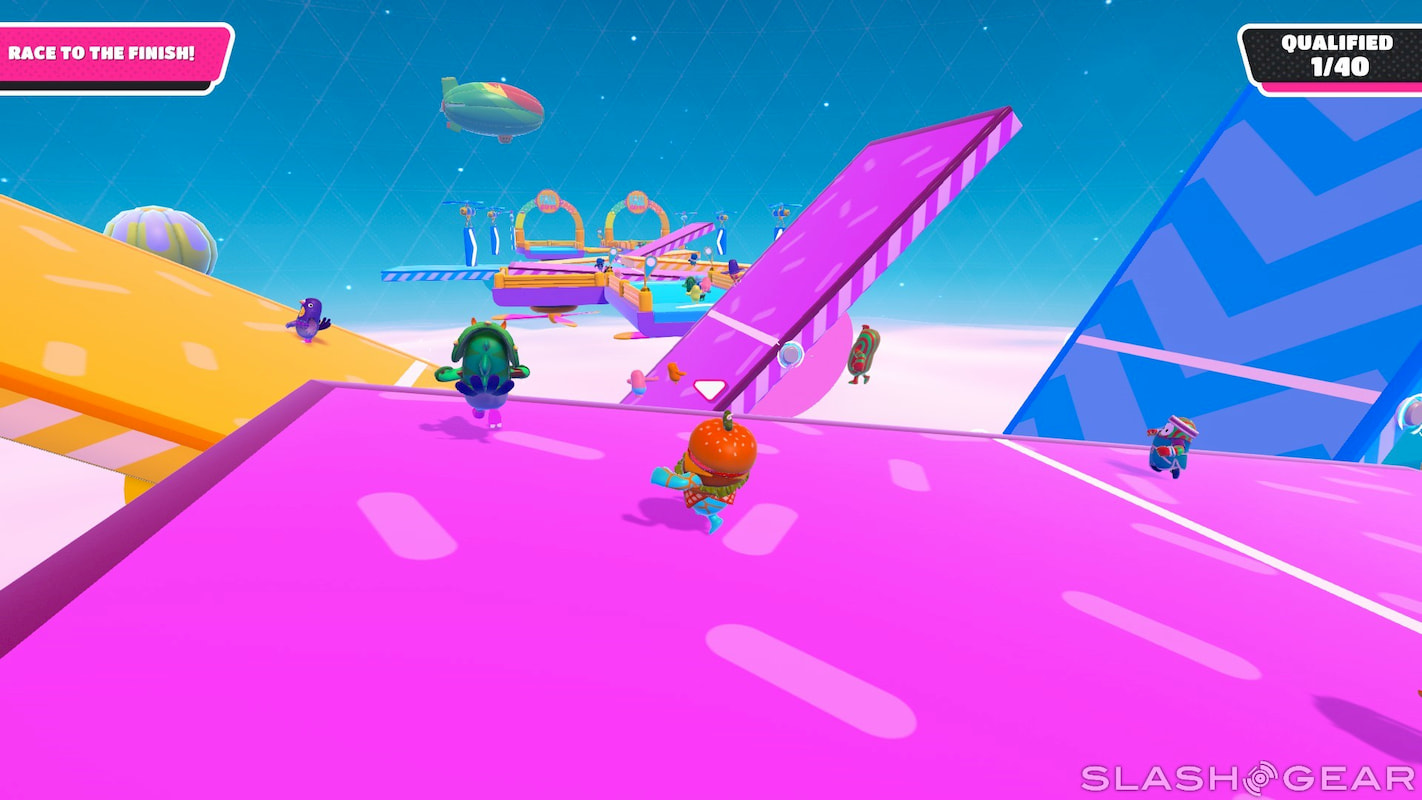 There’s also the fact that Fall Guys has not had the best launch week from a server stability perspective. A lot of people want to play this game at the moment, and it seems Mediatonic and Devolver Digital where wholly unprepared for this level of interest.

I understand that this is just the way it goes sometimes, and I don’t really mind the frequent server outages that need to happen while Mediatonic bolsters capacity, but my understanding doesn’t change the fact that it still stings to get dropped from a match in between rounds because you lost your connection to the servers. It very disappointing to feel like you were on a roll only to have server hiccups end your run early.

My apprehension about this shop and the few bad minigames aside, there’s no denying that Fall Guys is a good game that’s worth checking out, especially if you have PlayStation Plus. I don’t know if it has the legs to be more than a flash in the pan yet, but if Mediatonic has already confirmed that it’s working on new levels, costumes, and features. If it can ship those new levels quickly and consistently, Fall Guys could very well take its place among the battle royale greats. 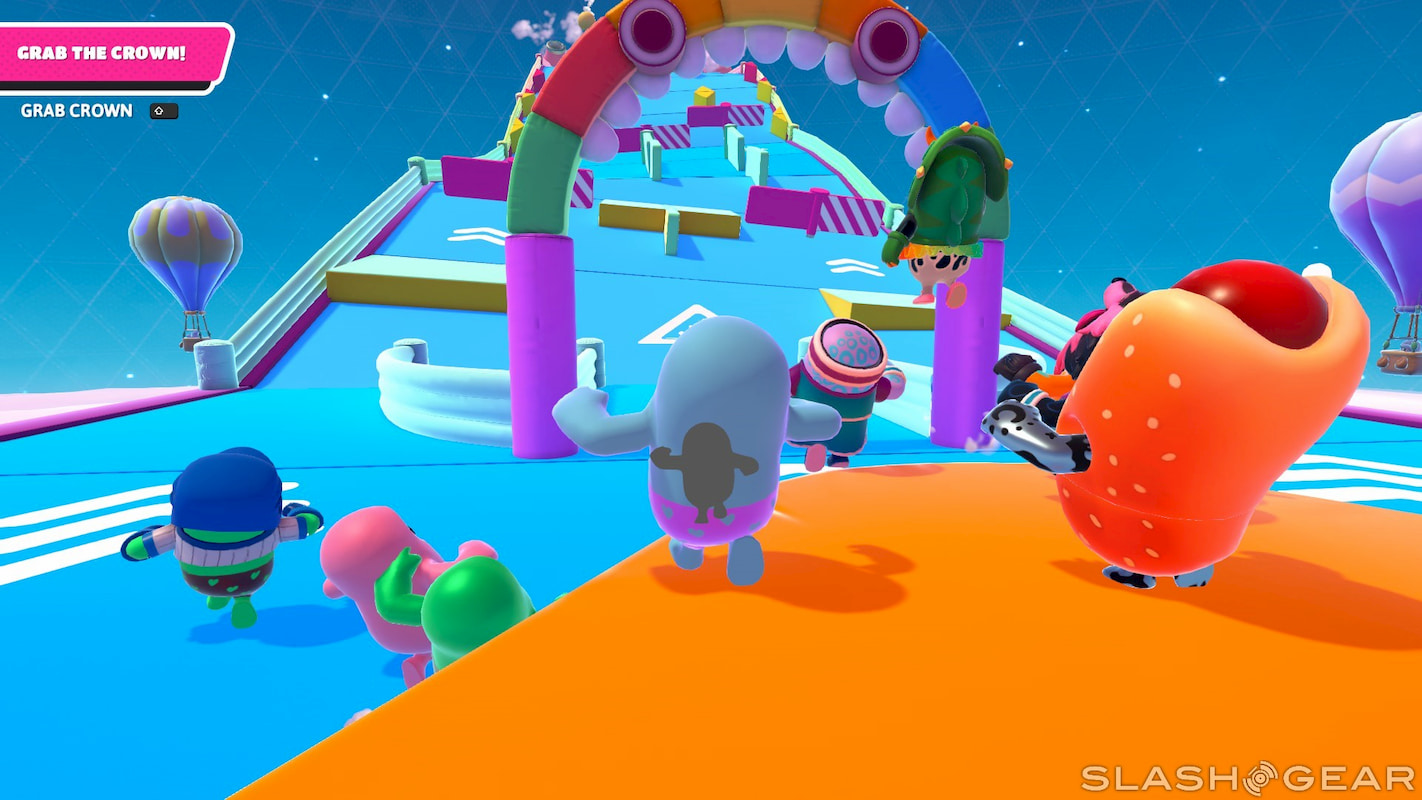 I think some people will play Fall Guys and wonder what the fuss is all about, because it definitely isn’t a game for everyone. As I stated earlier in the review, I think playing it in short bursts helps with that. In the end though, Fall Guys is a game that potentially everyone can pick up and play, but not something that everyone will enjoy, especially if you’re the type who likes to succeed in competitive games on skill and skill alone.

Then again, it doesn’t all need to be about skill. This is a party game, after all, and in party games, the main draw is more often hectic, zany fun that it is winning. If you have a subscription to PlayStation Plus, I say you should absolutely download it and take it for a spin, because you really have nothing to lose. If you’re playing on PC, I still recommend it, but you might want to watch for a sale if you’re not sure how much mileage you can get out of Fall Guys.