Europa may have active volcanoes on its ocean floor

One of the more interesting objects in the solar system, when it comes to searching for the potential for extraterrestrial life, is Jupiter’s moon Europa. On the surface, Europa looks like a giant frozen eyeball covered in veins. It’s hard to imagine activity under that frozen surface, but scientists believe that the rocky layer underneath that frozen surface could be hot enough to melt, creating undersea volcanoes.

NASA scientists have conducted new research and computer modeling indicating volcanic activity may have occurred on the seafloor of Europa in the recent past and could be happening still. NASA has a mission called the Europa Clipper, targeting 2024 for launch that will orbit close to the icy moon and collect measurements that could help scientists answer the question definitively. Scientists have found strong evidence that Europa has an ocean beneath its frozen crust above its rocky interior. 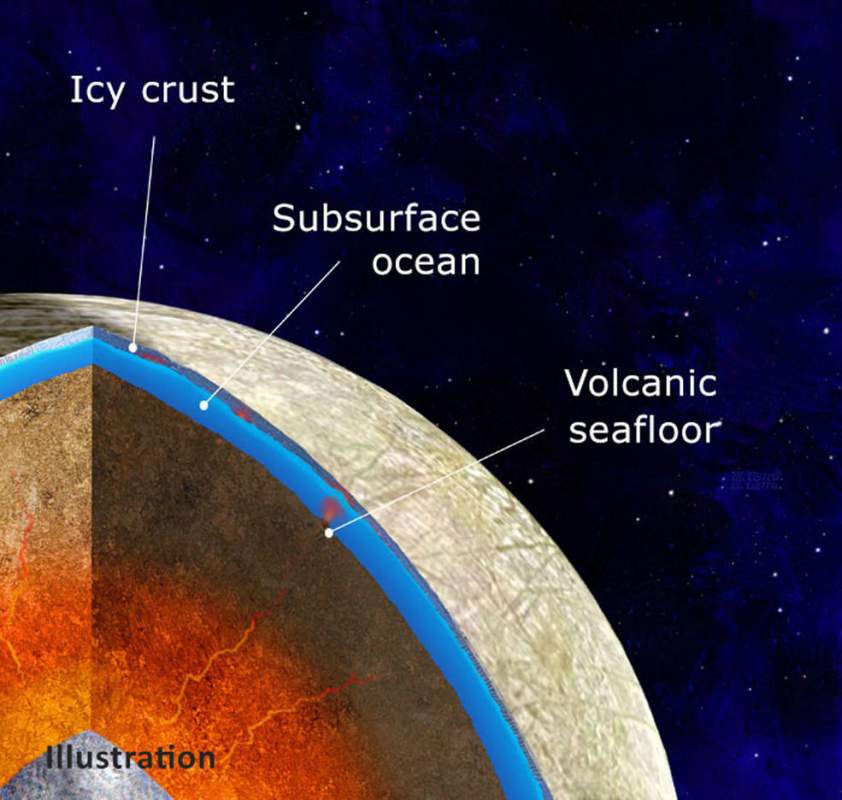 Research shows that the moon could have enough internal heat to melt this rocky layer partially, and that process could feed volcanoes on the subsurface ocean floor. 3D modeling about the internal heat is produced and transferred as the most detailed and thorough examination so far of the effect the interior heating could have on Europa. Scientists say the critical component to the rocky mantle of the moon being hot enough to melt has to do with the gravitational pull Jupiter has on its moons. As Europa orbits Jupiter, the gravity from the massive planet causes the moon’s interior to flex. The flexing motion forces energy into the interior of the moon, which leaks out as heat.

The more the interior of the moon flexes, the more heat is generated. Recent work shows where the heat dissipates and how it melts the rocky mantle increasing the likelihood of volcanoes on the seafloor. This is a significant finding because we know here on Earth that volcanic thermal vents on the ocean floor, even in some of the ocean’s deepest parts, are often teeming with life.