E3 is typically one of the biggest shows of the year, with many companies opting to make their biggest announcements of the year during it. This year, however, we saw instances of publishers and platform holders deeming E3 unimportant. Sony sat the show out entirely, which is not a great look considering that Sony is one of the big three gaming companies.

With attendance numbers that pale in comparison to other events (as illustrated in the tweet below from industry analyst Daniel Ahmad), E3 organizer the Entertainment Software Association is looking to shake things up for next year’s event. According to a leaked deck of slides from an ESA presentation to its members, the organization plans to turn the show into a more consumer-focused event next year, and while that sounds great on the surface, there are few ideas lurking within these slides that throw up some red flags.

Biggest gaming exhibitions / trade shows of by number of entries:

According to the slides, which were obtained and published by GameDaily, ESA plans to increase the number of available consumer tickets from 15,000 to 25,000 next year, a move which its members support. It also wants to turn Tuesday – traditionally the first day of E3 – into a day where only media, those within the industry, and influencers can access the floor, leaving Wednesday and Thursday as the days where everyone will be admitted to the show. 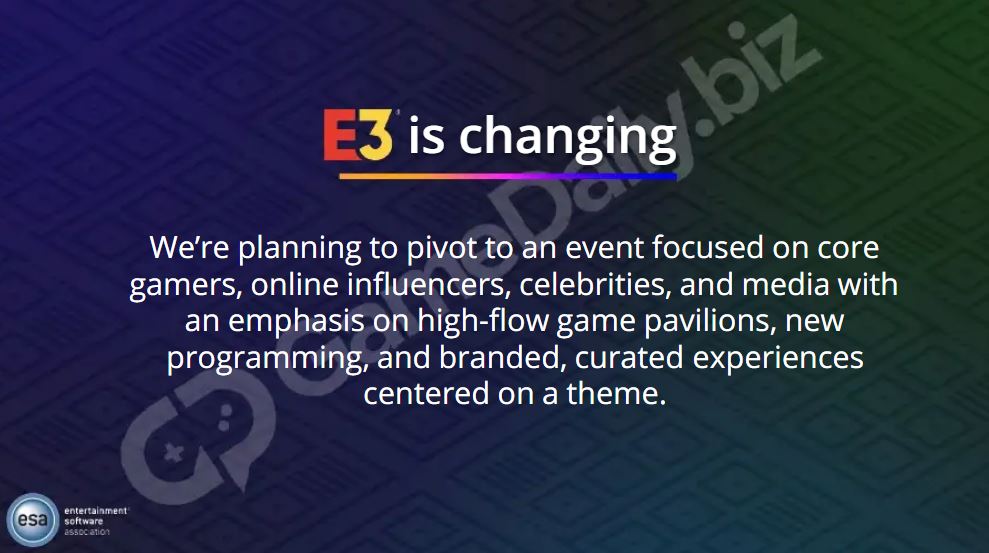 Ultimately, the ESA says that it would like to turn E3 into a “fan, media, and influencer” event, which gets away from the show’s roots as a business-to-business media show. “We’re planning to pivot to an event focused on core gamers, online influencers, celebrities, and media with an emphasis on high-flow game pavilions, new programming, and branded, curated experiences centered on a theme,” one of the early slides in the deck reads.

Some of the ideas the ESA proposes in its pitch include something called “queuetainment,” which will market to attendees waiting in line. The ESA also wants to develop an app that will allow attendees to schedule booth visits and cut back on time spent waiting to check out freshly-announced games. 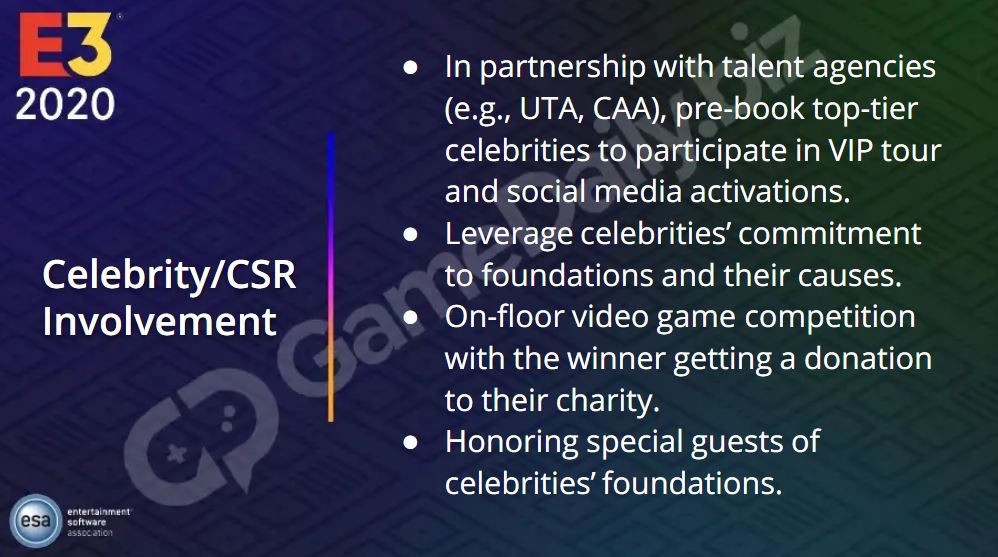 The ESA’s pitch also seems to be strangely focused on bringing celebrities into the fold, floating ideas such as working with talent agencies to get “top-tier celebrities” to attend the shows and participate in game competitions. The idea, it seems, is to have these celebrities compete for prize money for a foundation or charity of their choosing. 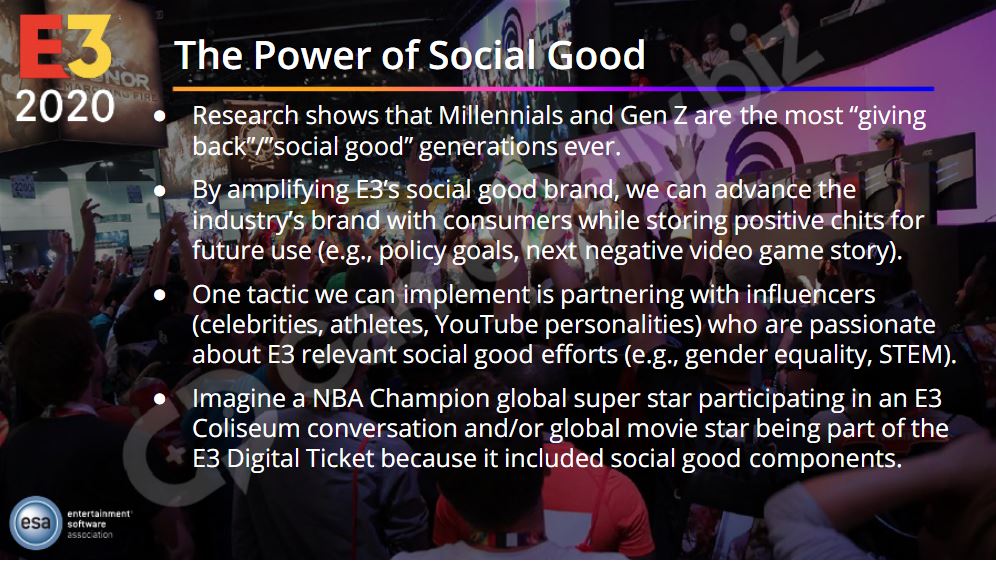 This ties into the ESA’s desire to tap into what it calls “The Power of Social Good” in one of the leaked slides. “Research shows that Millennials and Gen Z are the most ‘giving back’/’social good’ generations ever,” that slide reads. “By amplifying E3’s social good brand, we can advance the industry’s brand with consumers while storing positive chits for future use (e.g. policy goals, next negative video game story)”

Essentially, the ESA is talking about exploiting consumer goodwill with charity tournaments during E3 and then cashing it in when public opinion later turns against its members. As alarming as that is, one of the most egregious suggestions comes a few slides later, when the ESA promotes paid partnerships with the media. It’s unclear if the ESA is talking about advertising or sponsored content, but since the slide says that one of the organization’s goals is to “control content and the message” coming out of E3, it sure sounds like it’s the latter. 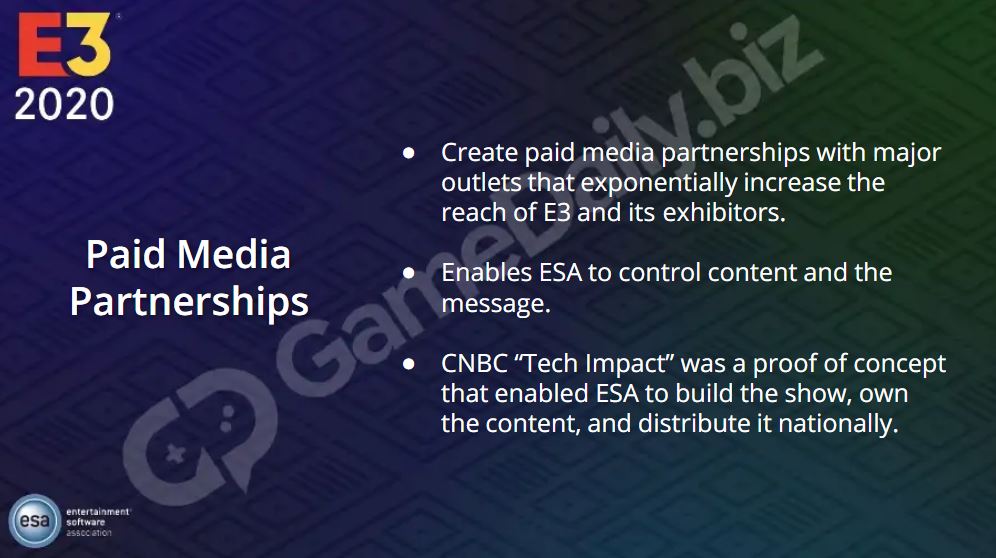 While it’s clear that E3 needs to make some changes to stay relevant in the digital age, some of the stuff the ESA proposes in these slides seems pretty cynical, especially when it comes to manipulating consumer goodwill and paying off the media to control the message coming out of the show. As with all leaks, you should take what’s contained in these slides with a grain of salt, but if E3 2020 arrives as a vastly different show from what we saw this year, we probably shouldn’t be surprised.