The statement was made public following a misunderstanding about whether it was supposed to be kept private (it was). Over on Edge.org, a piece featuring Jaron Lanier discussing artificial intelligence was posted. If you scroll to the end of the feature, you’ll see statements from others who shared their own thoughts on the technology, and amongst them for a brief period of time was the following from Musk:

The pace of progress in artificial general intelligence (I’m not referring to narrow AI) is incredibly fast. Unless you have direct exposure to groups like Deepmind, you have no idea how fast — it is growing at a pace close to exponential. The risk of something seriously dangerous happening is in the five year timeframe. 10 years at most. Please note that I am normally super pro technology, and have never raised this issue until recent months. This is not a case of crying wolf about something I don’t understand.

According to a spokesperson that spoke to the folks at Mashable, Musk’s statement was made in an email and hadn’t been intended for publication. The statement was pulled, but not before someone managed to grab a screenshot, which quickly went viral. It was summed up with:

I am not alone in thinking we should be worried. The leading AI companies have taken great steps to ensure safety. They recognize the danger, but believe that they can shape and control the digital superintelligences and prevent bad ones from escaping into the Internet. That remains to be seen…”

Check out the gallery below to see the actual screenshot of Musk’s statement, courtesy of Reddit user “Buck-Nasty”. Be sure to check out the timeline, as well, for related news. 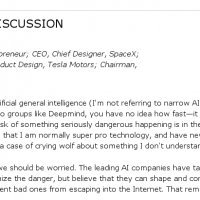