ElliQ is an adorable robot that helps the elderly stay connected

The company Intuition Robotics has introduced a new home robotic device that helps the elderly stay connected with their friends and family, only without the confusing aspects of using a smartphone or tablet. The system is sort of like Amazon Echo, in that it speaks and can be spoken to. However, it works with a dedicated tablet device and also provides the owner’s family or caretakers with things they may need to know, such as whether the house is too hot or cold.

The company calls its creation an ‘active aging companion,’ saying it is designed for older adults to help them stay engaged with the world around them. As the video below demonstrates, ElliQ talks with its owner, alerting them to tasks, events, messages, and incoming alerts using natural language.

For example, if an adult child attempts to initiate a video call with their elderly parent, ElliQ will verbally alert the parent about the call and ask if they want to take it. If the owner says yes, the system will automatically answer and pull up the video call on the related tablet.

ElliQ isn’t reserved for just alerting its owner about messages and such, but also is proactive in engaging its owner with suggestions that’ll keep them active. For example, the robot is shown in the video recommending a new TED talk to watch — it can also suggest and provide things like audiobooks and music, and recommend physical activities if someone has been watching too much television.

The system also works as a personal assistant of sorts, including things like reminding a person when it is time to take their medication or go to a doctor’s appointment. Family members also get insights into the owner’s home environment and overall wellness, making it easier to determine if there’s an issue that needs to be addressed (the heat needs turned up on a cold day, for example).

As with many AI-powered assistants, ElliQ grows smarter over time, learning its owner’s preferences and personality to better recommend activities. The robot component of the system acts human-like to help convey information, including moving in ways that express emotion. The robot also expresses itself using images, sounds, and lights. 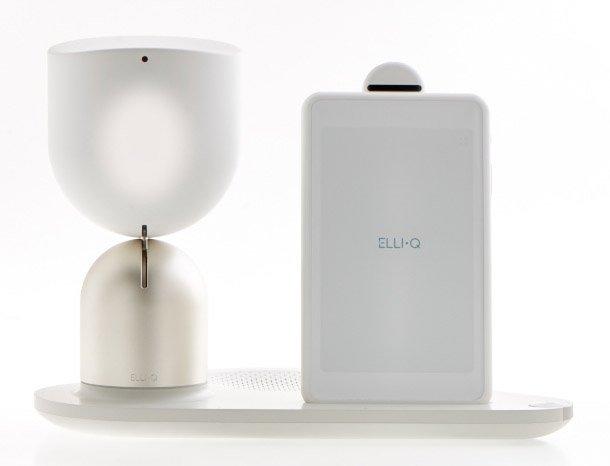