EHang Ghost 2.0 Drone with VR Goggles is controlled with a smartphone

EHang has unveiled a new drone aircraft for consumers to play with. The drone is called the Ghost 2.0 and it aims at making drone flying attainable to everyone with easy to use controls. The device uses tilt control to allow for easy control rather than having to learn a complicated remote control system or tap on the screen of a smartphone to control.

Control on the Ghost 2.0 is done with a special app that is available for Android and Apple devices. With the app running, all the flyer needs to do is tilt the smartphone to control where the Ghost 2.0 flies. To make flying the drone more immersive, it ships with VR Goggles. 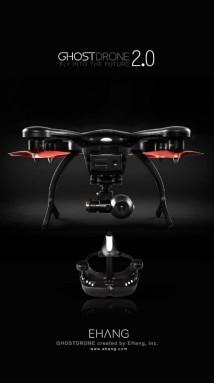 When wearing the Goggles the flier can see out the front of the drone thanks to a camera hanging beneath the drone body. That makes controlling where the drone goes much easier since controls are reversed when a normal remote control aircraft is coming towards you.

The Ghost app also enables users to control the drone and camera at the same time. EHang covers the drone with a year warranty so if you crash it and break it, the warranty will help get you back in the air. It’s unclear what the price of the Ghost 2.0 VR drone with the goggles will be will be, but the standard Ghost 2.0 drone sells for $699 including a $100 discount.