Dyson is finally entering the robotic age. Giving credence to our speculation last month, the vacuum cleaner maker has indeed come out with its own Roomba rival. Ominously named the 360 Eye, this robot doesn’t look like any of the robot vacuum cleaners you’ve set your eyes on, and that starts with the robot’s own eye.

The “360 Eye” moniker isn’t just for show. One of this robot’s key features is its 360-degree field of vision. It can literally see all around the room all at once, giving it a larger map of its surroundings. That alone makes it already better than our human eyes, but the camera is also able to record images at a rate of 30 images a second with a 45-degree angle. And being synthetic, it is able to recognize a bigger bandwidth of light than we ever could naturally. All of these, of course, is in the aid of helping the 360 Eye keep track of its position and determine where it should go. And to get there, the robot vacuum cleaner uses something most of its kin don’t: tank tracks. Most robots would use wheels, but Dyson put tracks on its robot, supposedly to give it more traction, even on very smooth floors. Of course, it uses corrugated rubber so that it won’t ruin surfaces or carpets.

The robot is driven by what Dyson has dubbed its Digital Motor V2. It utilizes digital pulse technology to give it the power to spin at powerful rate of 78,000 rpm but remains light and small enough not to weigh the 360 Eye down when doing its job. That job, of course, is sucking in all that dirt and dust. However, Dyson’s new Radial Root Cyclone, its smallest ever according to the company, is strong enough to capture even particles of smaller sizes like pollen and mold. With 8 such cyclones, this Dyson robot is able to generate centrifugal forces of up to 50,000 G, giving it its suction power. 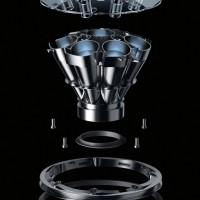 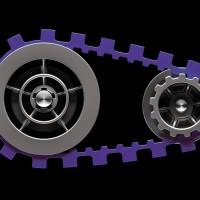 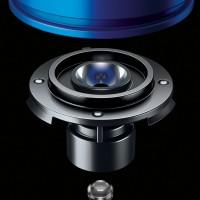 Of course, a hi-tech, semi-intelligent appliance in this day and age wouldn’t be complete without some remote access via a mobile app, and the 360 Eye is no different. With the Dyson Link app, available for iOS and Android but not for all markets, users can control and schedule the robot’s routine and check up on its progress.

For all its features, the Dyson 360 Eye definitely looks unconventional, taller and bigger than most robot vacuum cleaners people have become accustomed too. That said, it still manages to remain pleasing to look at, with a brushed metal chassis and a transparent bin. Unfortunately, it seems that the robot’s battery is one aspect that Dyson has neglected, as the 360 Eye is said to run for only 30 minutes before it needs to seek out its charging dock. No price has been dropped yet for this Dyson robot, which is expected to launch first in the Japanese market in early 2015.