DynaOptics may have the answer to optical zoom in phones

Smartphone cameras are getting more sophisticated and more capable, but there are just some things that they could not reach that a dedicated diigtal camera can. Usually, this is because of design or shape constraints. After all, you wouldn’t want your smartphone to look like camera, unless you actually fancy something like the Galaxy K Zoom. One of those “talents” happens to be optical zooming, but DynaOptics might have just developed a way that will give regular smartphones that same ability without bulking up the camera.

While of no use to selfiests, zooming in on a subject at very close ranges is actually a common photography use case. That, however, is almost impossible on a smartphone camera because of the lack of optical zoom. Traditional implementations of optical zoom involve lenses that extend out and usually involve at least three lenses. That’s just not an option when it comes to slim smartphones.

DyanOptics has attacked the problem from another angle. Instead of using multiple lenses that extend out, its experimental optical zoom uses a progressive lens that moves laterally. In effect, it’s like a bi-focal reading lens but its graded focus is spread on more than just one lens and isn’t abruptly cut up into two distinct parts. In essence, in order to have different zoom levels, the camera will look through different parts of the lens.

The company was able to produce such an optical zoom lens that is only 6 mm in height but can offer the same effect of a 3x optical zoom. In theory, when used for a smartphone’s camera system, the end users will not be able to distinguish any added bulk or height. Of course, there is actually some, but that will be up to the phone’s designer to address. 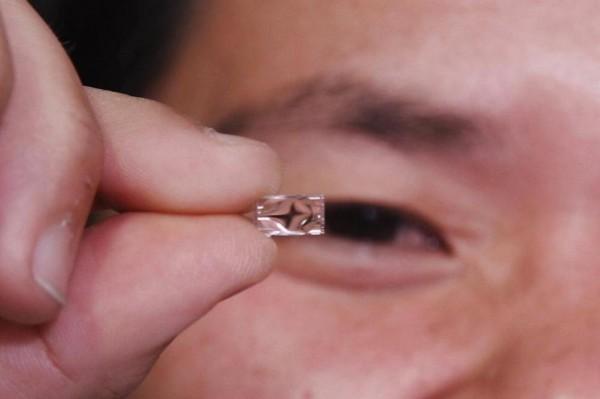 The rather disappointing part about this new piece of digital photography technology is that it won’t be coming anytime soon. The earliest that DynaOptics will be able to distribute samples would be in March next year. After that will be a long process of testing and perfecting the output quality of the lens. So when might these lenses land in our smartphones? Early 2016, if all goes well. Quite a long wait for smartphone photographers, but it could very well be a breakthrough that would bring smartphones closer to digital cameras.