DxOMark ranks the Moto X Style above the iPhone 6

Usually, we have to wait for a few more days after a new smartphone has launched to see any kind of camera benchmark from DxOMark. Surprisingly, the website has come out with one immediately after Motorola announced its new smartphones. In this case, DxOMark took the high end Moto X Style for a spin. Lo and behold, the smartphone was able to grab the second (or third) highest spot in the list, standing just behind the Samsung Galaxy S6 edge (and Galaxy S6) and shoulder to shoulder with the Galaxy Note 4. As a result, this has pushed back the iPhone 6 Plus to fifth place.

Spec-wise, the Moto X Style’s rear camera looks like the what’s what of mobile cameras. A 21 megapixel sensor, f/2.0 aperture, wide-angle lense, Phase Detection AF, Dual Color Correlated Temperature Flash, and video stabilization just to name a few. That sensor is said to be a Sony IMX230, which ironically has yet to find its way in a Sony smartphone. 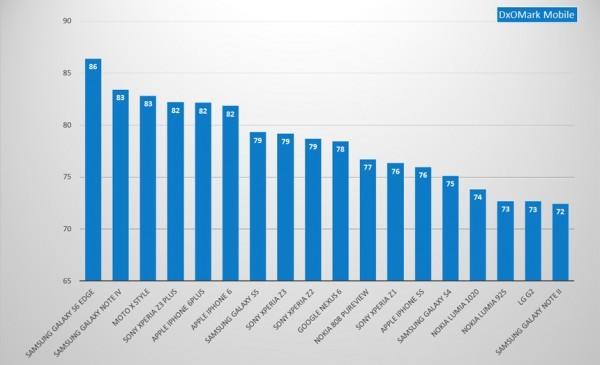 Based on DxOMark’s tests, the Moto X Style gets an 83 mark in the still photos department. Here, the iPhone 6 Plus does outdo it a bit with its own 84 grade. While the Moto X Style’s camera did display good preservation of details in outdoor use and accurate autofocus in any lighting condition, the performance was slightly marred by the flash, which negatively impacted autofocus stability and over-exposure.

That said, it’s in the video department where the Moto X Style really shines. DxOMark says that it has one of the best stabilization they have seen to date. Like in photos, detail preservation is top notch in both bright and low light situations. The drawback is that autofocus is slower in low light conditions and the flash’s tungsten produces some color shading. Still, the Moto X Style got a score of 83, just one step lower from the Galaxy S6 edge’s 84 but definitely higher than the iPhone 6 Plus’ 79.

And there you have it! Next to Samsung’s flagships, the Moto X Style has the best smartphone camera in town so far (we still have to see the LG G4’s ranking). But considering you’re getting a smartphone with a Qualcomm Snapdragon 808 CPU, 3 GB of RAM, a 5.7-inch QHD display, and a microSD card slot, for only $399.99 off-contract, then you might just have a better deal here.