By this time, there should be little doubt that Minecraft has ascended to pop culture status. Although still a game, its influence, and particularly its style, has reached far and wide, from games, to books, to media references. Now those Minecraft tendrils seem to have reached and taken root in Japan, where a new Dragon Quest spin off is brewing. While details of the game are still pretty slim, there is one thing that is immediately obvious. This world building game is, perhaps unabashedly, torn off from Minecraft’s book.

It’s not difficult to understand the lure of Minecraft, even for those who probably don’t consider themselves as gamers. The ability to build almost anything coupled by the challenge of stating from scratch and mixing materials sings strongly to the hearts of creatives everywhere. Minecraft’s significance was so strong that Microsoft took notice and gobbled it up.

But just as Minecraft is like a blank slate where you can make anything and everything your imagination can muster up, there will be some who will prefer to start from a more familiar setting, with familiar creatures, characters, and lore. That is perhaps what Dragon Quest Builders is attempting to do, to let players create their own DQ-based fantasy setting and maybe cook up their own adventures. Again, details are scarce but if the hints are correct, it could almost be like a Game Maker for Dragon Quest, so to speak.

Design-wise, DQ Builders isn’t completely Minecraft. There are obvious cues, mostly in the world objects seen in the screenshot as well as the blocks in the website. However, the dragon and the character depicted in the same image aren’t limited to the same blocky, pixelized representations you see in Minecraft. The foliage is also more detailed. It will be a curious mix of low poly blocks and high poly objects. Which is well and good, because we can’t imagine a Slime other than how a Slime looks. 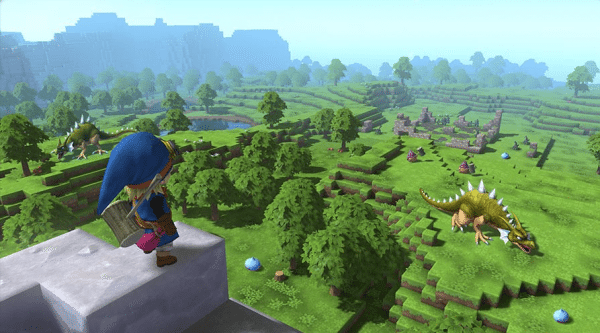 Dragon Quest Builders is slated to launch in Japan later this year, with no word on an international release. Target platforms include Sony’s gaming devices, such as the PS4, PS3, and PS Vita. DQ creator Yoji Horii and original character designer Akira Toriyama are both involved in its development, lending a bit of weight to this spin off.