Doorbot is shedding of its somewhat industrial and rather geeky image, changing its name to a more generic-sounding Ring and looking more like a doorbell that can blend into your house’s design. But more than just shedding off appearances and names, Ring, formerly known as Doorbot, picks up a few new tricks that turns the WiFi doorbell into a more well-rounded security system.

Doorbot launched as a Kickstarter campaign in 2012 with a proposition that by now sounds all too familiar for home automation believers. It connects to your home’s WiFi network not just because it wants to but to be able to record and transmit video recordings of who is at your door but also lets you talk with them to give the semblance of being at home even when you’re not. Definitely a useful concept, but even its founders saw that Doorbot, as a product, was clearly a first generation one that needed to undergo some refinement.

That refinement has led to the naming and creation of Ring, an even smarter but still WiFi-connected doorbell. While it looks less obnoxious or less obvious than Doorbot, the LED ring around the button might give some hints that this is no ordinary doorbell. And in fact, it is, especially considering that it steps up the features that it offered in the first iteration, both in video and audio capabilities. 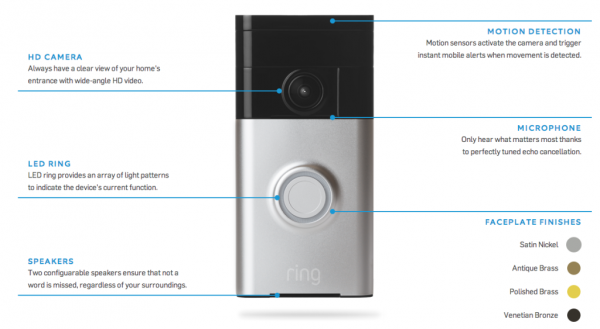 The 180-degree camera spans your entire front (or back, if you prefer) yard and you can set up zones which will trigger Ring’s notification system. This lets you exclude certain areas that you know are high-traffic or high-movement parts anyway. When triggered, owners can have the option to view and review those videos as much as they wish. Using Ring’s communication feature now also feels less like using a walkie talkie and more like a phone, eschewing the earlier push-to-talk system for one that resembles more like a regular phone call or, in this case, a video call.

What hasn’t changed is the price tag, at least for the pre-order season. Like the Kickstarter price, Ring will cost $199 starting today until November 1. After that period, it will start carrying a $249 price tag. But that is just for the device itself. Cloud-based video recording, which is what most users will want anyway, will have several subscriptions options, which are still unknown. Early bird buyers, however, will be able to get that for free until January 1, 2015 which, considering the product ships November 1, only offers 2 months of peace of mind before you start having to cough up monthly fees.