Diablo II Resurrected alpha impressions: Back to Hell we go

Diablo II Resurrected‘s first technical alpha wrapped up earlier this week, giving us a brief glimpse at the game Diablo fans have been requesting for years. This is the first of at least two Diablo II Resurrected tests Blizzard plans to hold, and this one was fairly limited in scope – not only did we just have the weekend to check out the game, but we were limited to three of the game’s seven classes and just two of its Acts.

Still, that was more than enough to get a feel for how the remaster is progressing, and though I didn’t get to play as much as I wanted thanks to being sick during the technical alpha’s weekend, I played enough to say that this is shaping up to be every bit as exciting as Diablo fans were hoping it would be.

It really feels like Diablo II Resurrected is the Diablo II many of us remember, only with souped-up graphics. If you’ve played Diablo II before, it might not even seem like the graphics have changed all that dramatically when you first boot up Diablo II Resurrected. When I was playing through the opening stages of the technical alpha and broadcasting it in Discord for my friends, we all commented on the fact that Diablo II Resurrected looks like what we remember the original Diablo II looked like when we first played it 20 years ago. 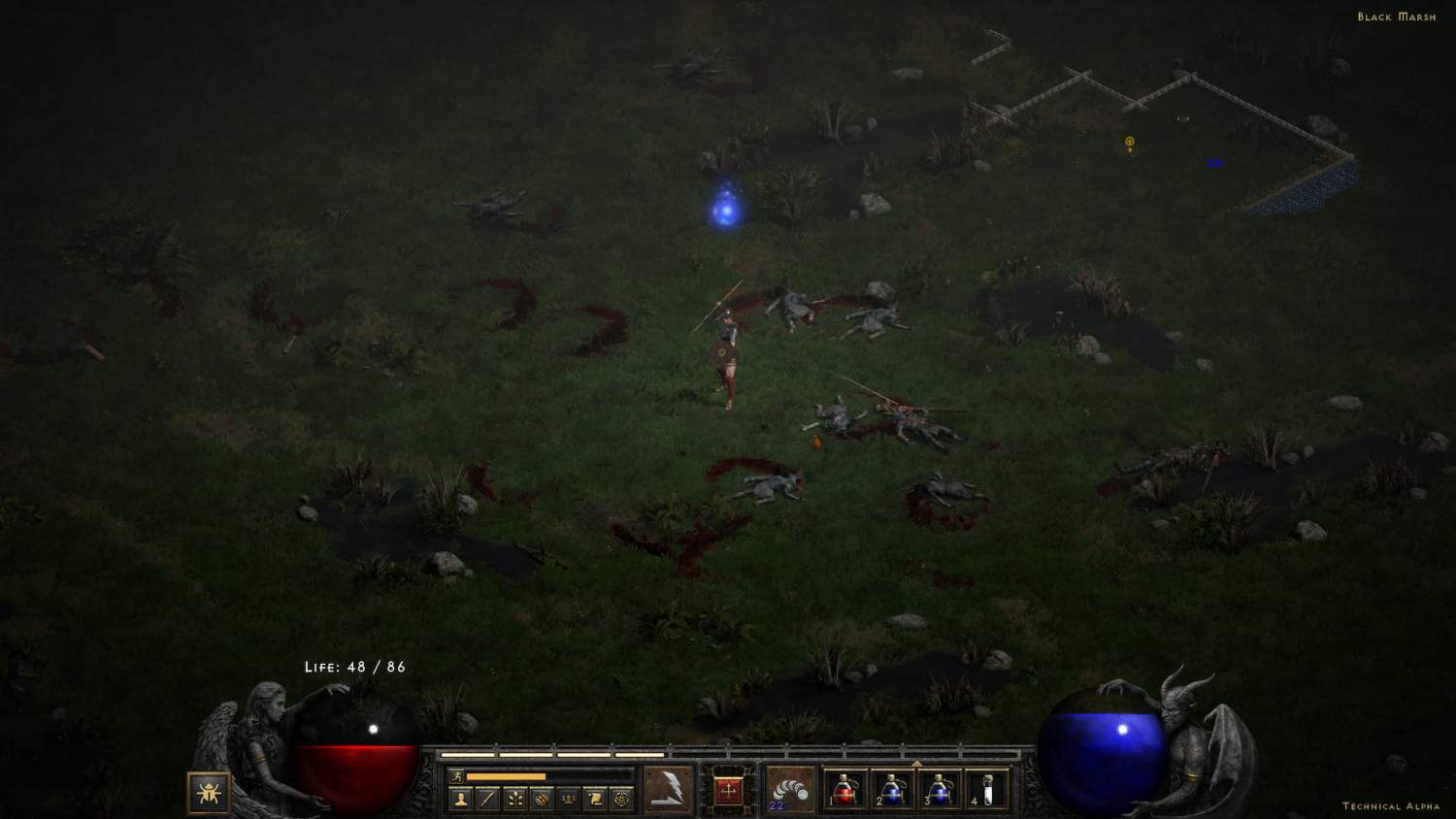 Obviously, Diablo II Resurrected looks a lot different from the original game that released back in 2000, and when you see images of the game side-by-side, those differences are clear. You can see the difference between the two versions in-game anytime you want with a simple keystroke. If Blizzard’s goal with Diablo II Resurrected was to make it feel like you were coming home again, it definitely succeeded. 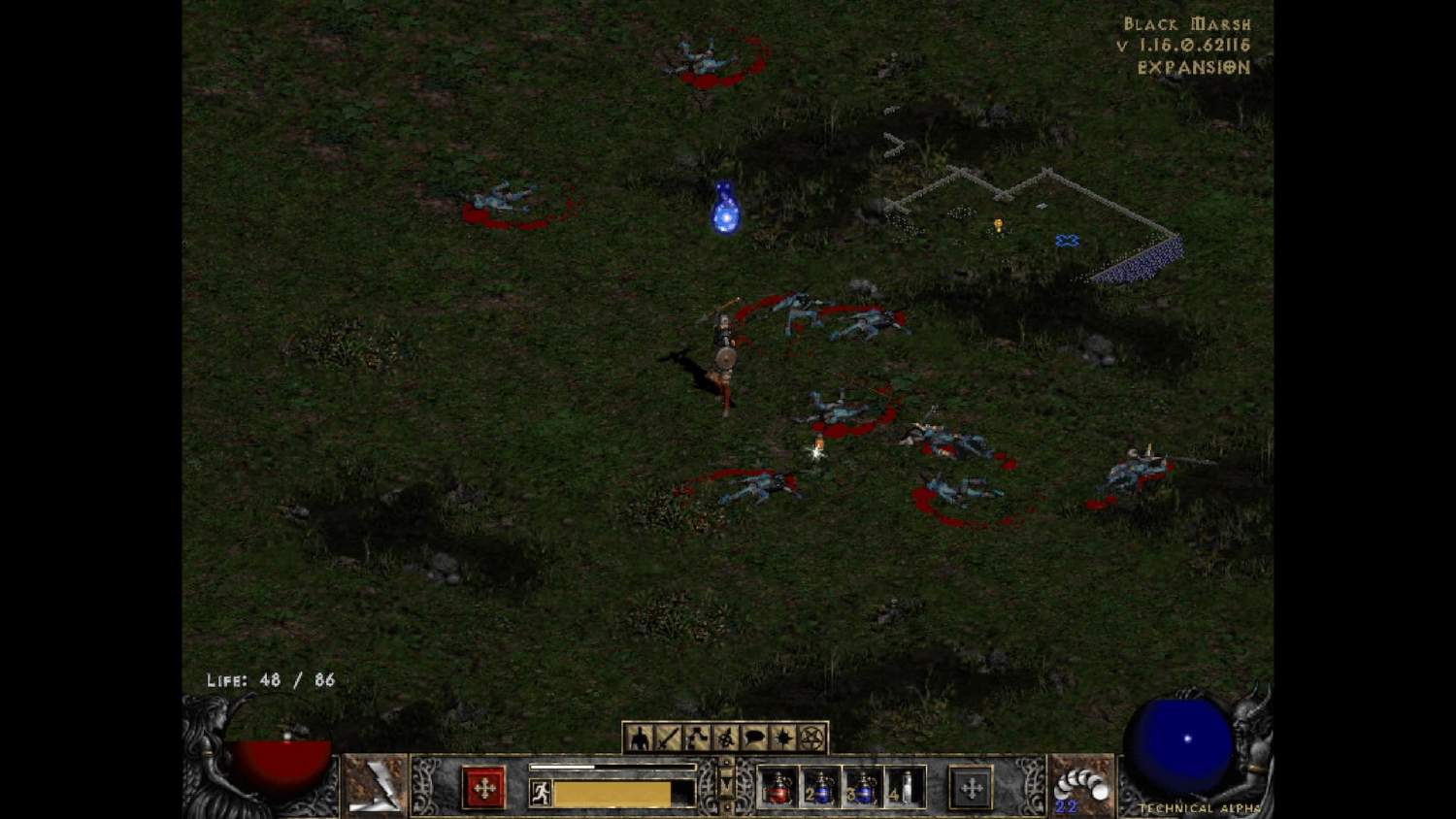 I think the new graphics look great – they almost have a retro feel to them despite being one of the only truly new components of Diablo II Resurrected. Most of the original game is left intact, which means that a lot of the quality of life features implemented in Diablo II‘s spiritual successors, descendants, and derivatives aren’t present here.

Think those Town Portal scrolls should stack? Well, they don’t, and until you buy a tome to store them in, each of those scrolls will be taking up one slot in your very limited inventory. In Diablo II you have a stamina bar that you have to manage, and when it becomes fully depleted, you can’t run anymore. I’d entirely forgotten about the stamina bar before I booted up Diablo II Resurrected for the first time, because it’s something that I haven’t seen since the last time I played the original nearly two decades ago.

I’m positive there’s a large contingent of players out there who are thrilled by the fact that Blizzard hasn’t made a ton of quality of life changes to the game, but for any newcomers who might be thinking about diving in for the first time when Diablo II Resurrected releases, it’s important to know that this game – despite being a remaster – is still very much a product of its time. Some of the mechanics feel a little bit clunky at first just because we’ve had 20 years of refinement in the action RPG space since Diablo II was the big dog on the block.

Outside the graphics update, it isn’t as if Diablo II Resurrected is exactly the same as Diablo II, though they are close. Blizzard has made a few common sense quality of life changes to the game to make things flow a little smoother. There’s an auto-pickup option for gold now, and I can safely say that I will never play with that option off. There’s also a shared stash now, which is a big win for people who like to maintain multiple characters (and who doesn’t?). 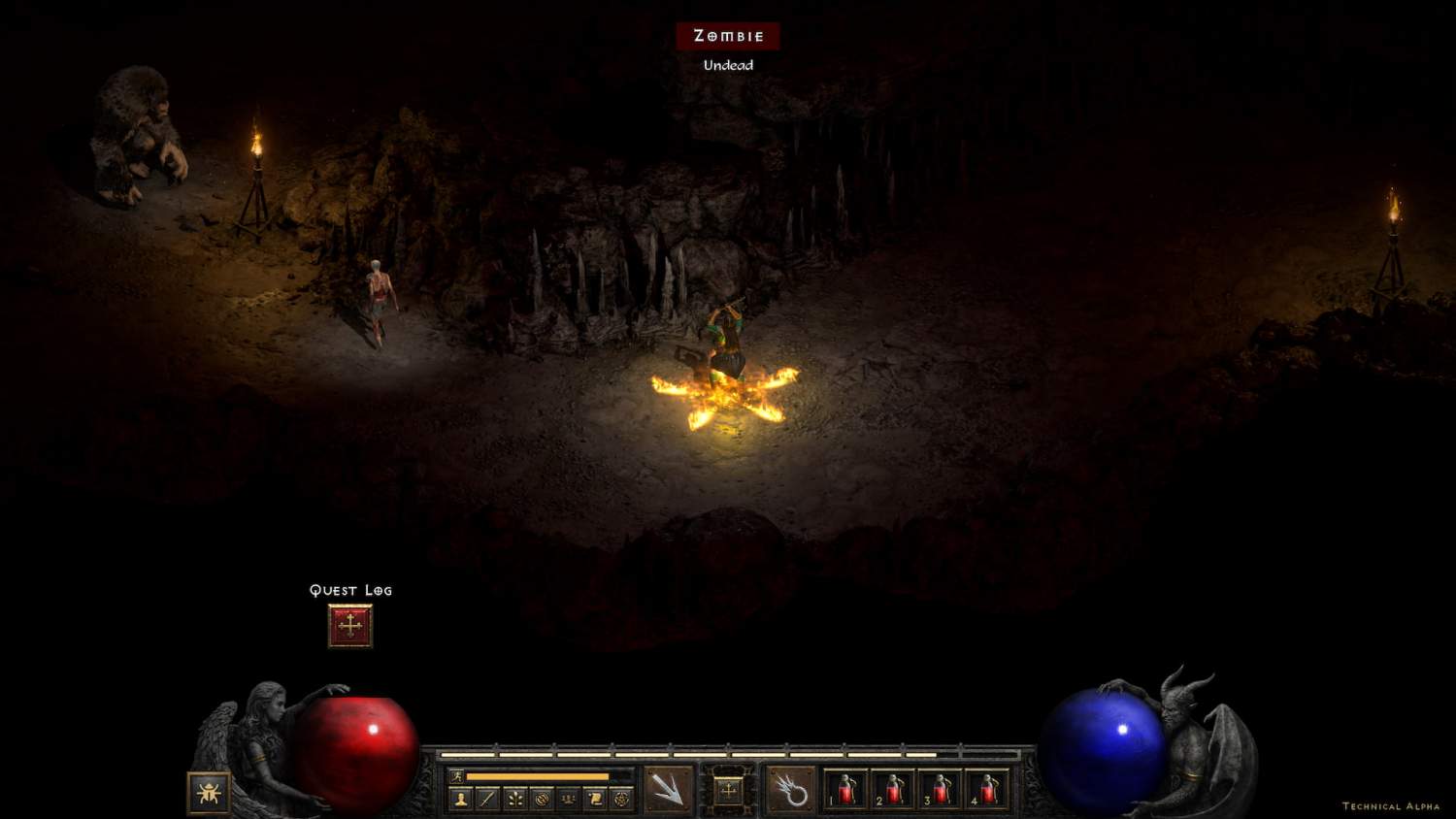 Outside of that handful of quality of life changes, though, Diablo II Resurrected sticks to the original Diablo II formula and does not deviate from it. Is that a bad thing? I don’t think so, but for me this is a trip down memory lane, not a new experience that I’ve been hearing about for 20 years and am now only checking out with the remaster. I think some new Diablo II players might be turned off by how slow and methodical this game can be at times, especially if they’re coming from faster-paced games like Diablo 3 and Path of Exile.

With that being said, I would like to see a couple more quality of life improvements made to the game before it launches. The biggest thing I’d like to see is an show loot toggle that I can set and forget. As it is, you need to hold the Alt key to see the loot that’s on the ground, and I’d prefer to just see that information all the time. I’d like to see that extended to lootable containers like chests and hidden stashes as well, because even with the new graphics, they’re easy to miss.

Aside from some small quality of life tweaks, though, I think Blizzard’s approach to Diablo II Resurrected – that being “make it look pretty on a widescreen monitor but leave most of the other stuff alone” – is the right one. We already know that Diablo II is a fantastic game that doesn’t need many changes to be good in 2021. 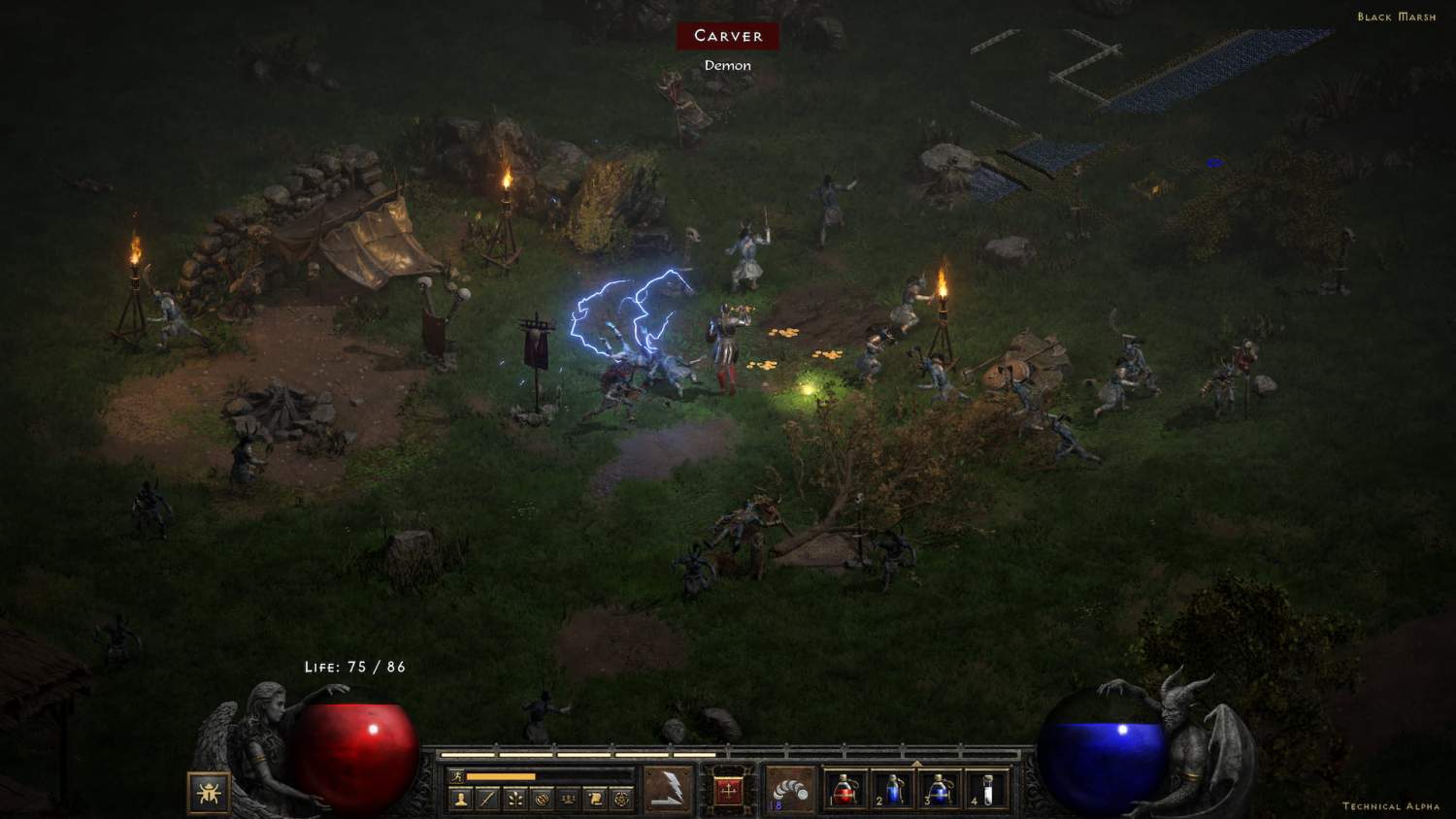 While we only got to play the first couple of Acts in the technical alpha, I do wonder if Diablo II Resurrected‘s endgame is going to be enough to keep players interested in the long run. After all, we’ve had 20 years of action RPGs that have only expanded the endgame grind. Path of Exile is the best example of this, because with that title, the main story can largely be viewed as the prelude to endgame maps, which these days are the true meat of the game.

You can play a game like Path of Exile (or even Diablo III) forever thanks to endgame grinds that never really end. While you can also play Diablo II forever, it doesn’t have that same endgame structure to keep people hooked. Does it need that structure, though? Does Diablo II Resurrected need to compete with newer ARPGs on the never-ending grind front?

I’m not convinced it does. Of course, it’s been a long time since I last played Diablo II, so perhaps I’m forgetting just how addicting this game is. For now, all I can say is that whether it keeps me occupied for 30 hours or 300, I’m looking forward to playing the full version of Diablo II Resurrected when it launches later this year.