Dell has just quietly upgraded one of its more “unique” Windows devices. One of the first 8-inch Windows tablets in the market, Venue 8 Pro now has a younger but more powerful sibling with a name that takes a page from Apple’s branding guide. Simply called the “New Dell 8 Venue Pro“, the slab still sports an 8-inch screen, but this time boasts of a Full HD resolution, an upgraded Atom processor, and, in one instance, double the RAM of its predecessor. Sadly, it also boats of a higher price tag as well.

In terms of specs, the most important changes are the jump from the older model’s Atom Z3740 to a shiny new Atom x5-Z8500 form Intel’s current Cherry Trail generation. The screen resolution also goes up from 1280×800 to 1920×1200. Memory is also doubled to 4 GB RAM and 64 GB internal storage. There is also the subtle and somewhat unexpected addition of an NFC sensor inside.

Most of the features remain the same on both old and new generations, which means that the New Venue 8 Pro is still compatible with Dell’s Active Pen, though, as usual, it is sold separately. You really only get the slab, and you’ll be paying somewhat handsomely for that. 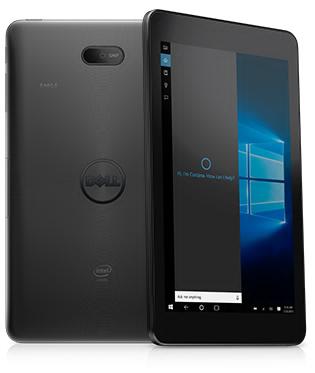 Prices start at $449, Dell says, but fortunately that’s actually the ceiling price already. That comes with Windows 10 Pro but you can opt to save a few bucks by downgrading to Windows 10 Home. Both only come in a 64-bit flavor. There are also a few configurations available. You have a choice of simply getting the lowest variant available, still with Windows 10 Pro, at $349. That keeps the new Intel Atom processor but downgrades the screen back to 720p and memory to 2 GB RAM and 32 GB internal. For an additional $50, however, you can at least get the model with 64 GB of storage.