Create your own hellish monsters with this sketch-based AI generator

Artificial intelligence trained with photos of real-life things eventually learn to generate simulations of things based on sketches, at least in the case of the pix2pix project. We’ve been keeping an eye on this project for a while, having previously noted its increasing abilities to generate buildings and even cats from crude sketches. Now the AI is back with some new training, and the resulting images are mostly terrifying.

The pix2pix project is a demonstration of machine learning — that is, it is a type of artificial intelligence that is trained by humans using whatever category of things it is dedicated to. This has been demonstrated in various ways, such as the machine-learning algorithm that was trained with romance novels and tried to write its own romantic story. There was also the AI-created Christmas jingle and the rap song.

In the latest instance of the pix2pix project generator, it has been trained with photos of human faces, learning to generate realistic photos of people based on line sketches. Now, if you were take the time to draw a realistic, highly detailed sketch, the generator is actually pretty great at recreating the sketch as a photo. For most sketches, though, the results are, well, that thing above. Compare that to the sketch below: 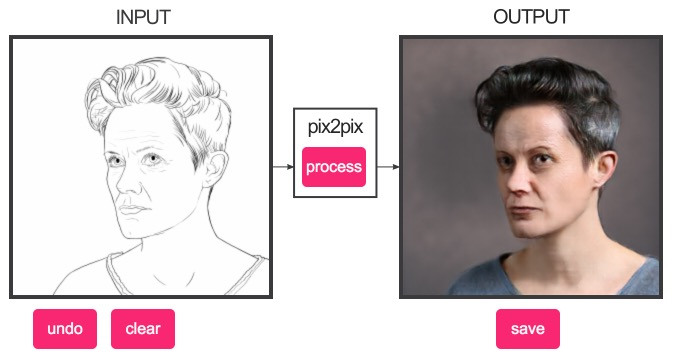 The results are crude, yet notable, with it being clear what the AI was going for; the ‘realistic’ aspect of the generator is mostly there, in the sense that we can tell it is trying to create a 3D living being, shadows and highlights included. This is only one example of many AI-based generators out there, some better than others. Last Halloween, for example, MIT put up its so-called ‘Nightmare Machine,’ which uses a deep learning algorithm to transform an ordinary photo into a horror-themed one.

You can try it out for yourself here.