Crack the code to find 4.87 hidden bitcoins in artist’s image

Artist Marguerite Driscoll has created a fever in the cryptography community as she has launched her latest Bitcoin puzzle in the form of an intriguing mix of art and cryptography. The artist announced via a Twitter update that she released a new cryptographic image hiding a key to 4.87 bitcoins. Her “crypto art” has created a frantic fever of excitement among professional and amateur cryptographers alike. Reddit communities and Bitcoin Talk forums have sprung up as people collaborate, trying to solve these insanely complex cryptographic riddles.

This is Driscoll’s third cryptographic painting in her series, “The Legend of Satoshi Nakamoto,” who is considered by some to be the mysterious father of Bitcoin. For a glimpse into how difficult Driscoll’s puzzles can be, take a look at this 34-page report which divulges the complicated steps necessary to solve the key to her previous puzzle in the series.

4.87 bitcoins is only about $1400 USD, so these teams of decoders are more interested in the actual puzzle itself than the money that comes along with it. Let’s not forget that the bragging rights that one would get from solving something like this would trump almost any amount of money.

Driscoll has been surprised by the frenzied response to her puzzles, stating she, “didn’t anticipate how emotionally attached people would become to the puzzles.” She also believes her crypto art puzzles are some of the “new, innovative ways we can educate the public regarding Bitcoin, cryptography and blockchain technology.” 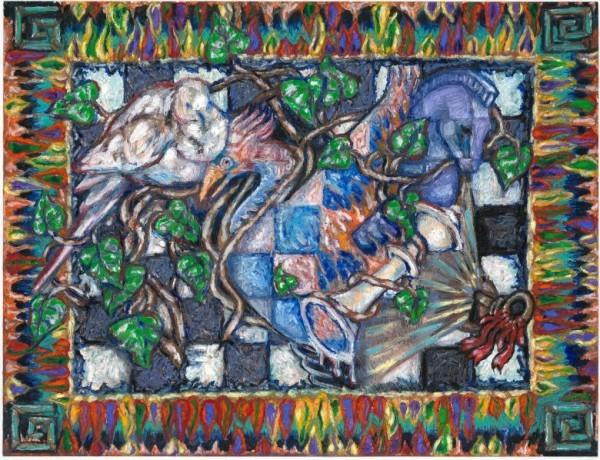 Her latest puzzle has yet to be solved and has no deadline, so if your cryptography skills are up to the task you can join in help untangle the complicated code.