Sometimes hands created for robots need to be very strong with the ability to grasp things very tightly and use them. Other times robot hands need to be very delicate to prevent any injury to humans they are working with or damage to fragile items they might be holding. Researchers at Cornell University have invented a hand for a robot that is able to grip things gently and can also sense the shape and texture of the item as well.

The team of scientists say that the soft robot hand is a step forward in soft robotics that are already in use in warehouses and food handling. At the same time the breakthrough could also help usher in improved prosthetics. Traditionally a robot hand would be made of hard parts that have joints and motors for operation and the parts had to be made from something that could conduct electricity.

These robotic hands now only need to be made from something that can conduct light thanks to the research led by Huichan Zhao, a Cornell doctoral candidate. “Our human hand is not functioning using motors to drive each of the joints; our human hand is soft with a lot of sensors … on the surface and inside the hand,” Zhao says. “Soft robotics provides a chance to make a soft hand that is more close to a human hand.” 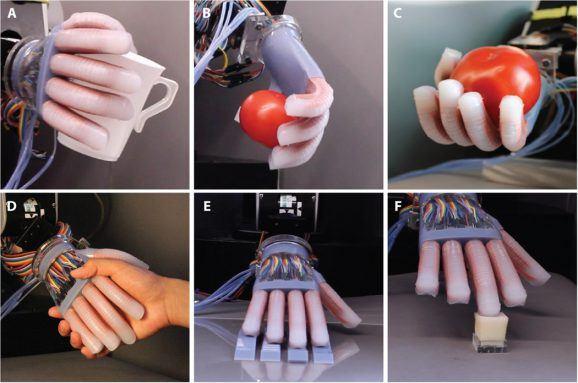 The light signals run through something the researchers call waveguides inside the fingers. When the flexible hand touches something these waveguides bend and distort or change the light signals allowing the robot to gather data on what it is touching. The breakthrough in soft robotics the team has made means that these hands can be made with cheaper materials that could eventually lead to cheaper prosthetic limbs that give the wearer a sense of touch. The team estimates that their soft robotic hand could be made for under $50.