NASA‘s Cassini spacecraft has found something very interesting about Saturn: the ringed planet’s north polar region is changing color. When the spacecraft photographed Saturn’s north pole in 2012, we saw images of a blue hexagon that stood out from the rest of the planet. Upon photographing the region again in 2016, that hexagon has changed to a gold color.

Why the change? NASA thinks it has something to do with the seasons on Saturn. The hexagon itself is a six-sided jetstream, and during what NASA describes as the polar winter night between that occurred between November 1995 and December 2009, that jet stream helped keep out aerosols that are produced by photochemical reactions. Since the north polar region wasn’t getting direct sunlight, photochemical reactions were low, and so too was the amount of aerosols in Saturn’s atmosphere.

The seasons, however, are now changing, and as Saturn approaches its May 2017 summer solstice, more of the hexagon is moving into direct sunlight. This shift has an effect on the number of photochemical reactions taking place, which in turn effects the amount of aersols in Saturn’s atmosphere. The result is the golden hexagon you see in the image taken last month. 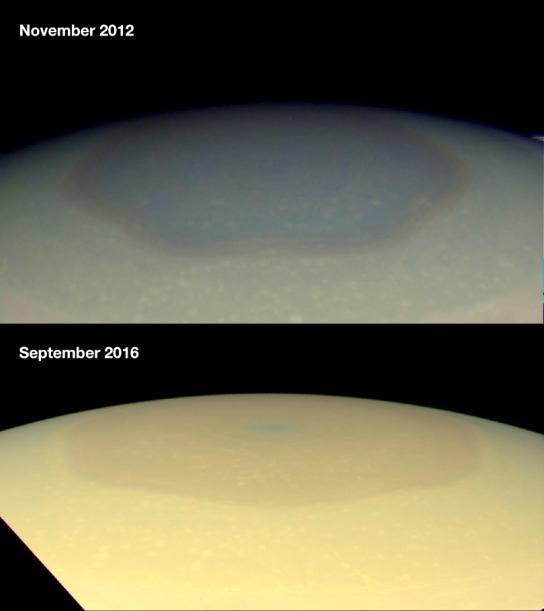 Sunlight may not be the only thing in play here, as NASA scientists say that atmospheric circulation may also effect the haziness of the hexagon. “Other effects, including changes in atmospheric circulation, could also be playing a role,” NASA said. “Scientists think seasonally shifting patterns of solar heating probably influence the winds in the polar regions.”

Whatever the cause, it’s pretty neat to see atmospheric systems in action on Saturn. Cassini is currently in the final year of its mission to Saturn. Next year, an encounter with Titan – one of Saturn’s satellites – will send the orbiter crashing down to the planet, ending the mission that launched way back in 1997.