Japanese tire giant Bridgestone is showing off a revamped model of their prototype Air Free tire at the 2014 Paris Auto Show. First unveiled in 2011, Bridgestone has been working hard to improve their invention, which works by replacing the air-filled rubber donuts of today with a single band of rubber wrapped around resin blades built to absorb shock and support a car’s weight. As we can see from the photos, the tires have a similar to look to the spokes on bicycle wheels.

While the first, and most obvious, benefit of an airless tire is no more flats when your car is out on the road, Bridgestone’s Olivier Monbet, leader of their technical department in France, says there’s more. With every part of the Air Free tire being recyclable, they can greatly reduce the waste associated with the production and use of tires on the road today. 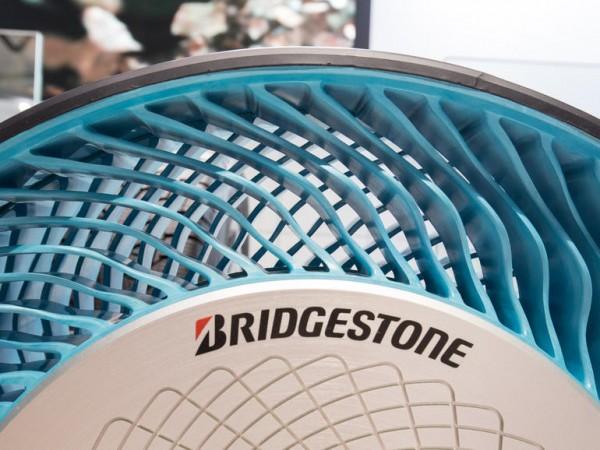 Monbet adds that their biggest improvement from 2011 has been how the tire absorbs shocks, thanks to a new design that can resist the buildup of heat. Their next goal is deal with the stiffness the driver feels while steering, due to lateral movement. Bridgestone is planning to continue developing new prototypes over the next four years or so, and hopes to begin road tests within one year by pairing the Air Free tire with Toyota’s small, single-seat electric vehicles that are often seen on the streets of Tokyo.

Even with industry rivals like Michelin and Britek Tire developing their own airless tires, Bridgestone is in no rush to bring its model to the consumer market. There is still much work to be done, and Monbet says there’s no point in trying to determine pricing right now, however, he adds that they do expect costs to drop over time as production increases.