Bottle Rockets are Fortnite’s next weapon, likely coming this week

Ahead of this week’s Fortnite patch, Epic Games has started teasing the next item coming to the game. This is par for the course for Epic – though it doesn’t always tease the next Fortnite item ahead of its debut, it frequently does. At first blush, it looks like we’re getting another weapon, but this new item might have some degree of utility that other weapons do not.

As revealed on Fortnite‘s in-game news screen, Bottle Rockets are the next weapon heading to the game. The flavor text Epic published alongside a teaser image simply says, “Loud, bright, and dangerous! Warning: do not light indoors.” That doesn’t give too much away, but that doesn’t stop us from making a few guesses. 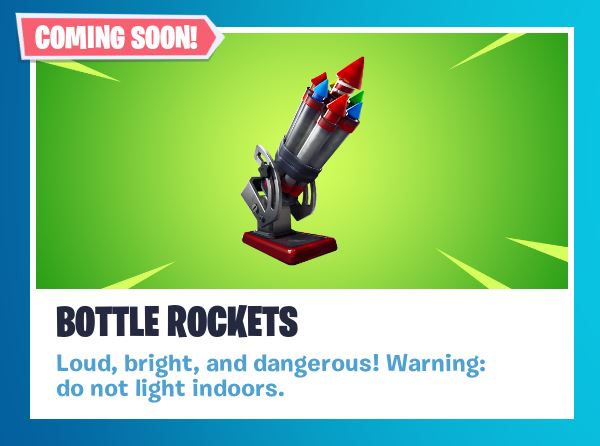 It seems that Bottle Rockets will certainly do some kind of damage, but the fact that Epic stresses they’re loud may suggest they can be used to get a jump on an enemy. Maybe they can be used as a distraction to draw your enemy’s attention away from you as you flank them? If Bottle Rockets are sufficiently loud enough to cover up the sound of your movement, they could very well be used in that manner.

Judging from the image, it seems they’re placed on the ground and fired from a stationary position. Assuming that’s actually how Bottle Rockets are used, perhaps that means they’ll also be useful a siege weapon? It’s possible that the best way to use them will be to simply place them on the ground, point them at enemy structures, and unleash your fury. Bottle Rockets could be very effective for sieging, especially if you get to fire off multiple rockets in quick succession.

Obviously, we won’t know what Bottle Rockets are capable of until Epic delivers Fortnite‘s weekly update. That should be happening at some point in the next day or two, and once that update is live, we’ll have a breakdown of the patch notes right here at SlashGear. Stay tuned.