Bollinger has been teasing with promises of an electric vehicle with hints of classic Range Rover styling for a while now. The company has finally shown off updated designs for its electric SUV and pickup truck that it says are production-intent versions. Bollinger has been working on its simple electric truck platform for a while.

While the designs are simple, the vehicles are actually quite expensive, with a starting price of $125,000. As for why such a simple design, which admittedly looks like a generic Jeep or Land Rover clone, costs so much, blame the state of battery and EV technology. We particularly like the SUV version with the glass panels on its roof.

The electric SUV is known as the Bollinger B1 and promises dual electric motors producing 614 horsepower and 668 pound-foot of torque. The vehicle is limited to 100 mph but will reach 60 mph in 4.5 seconds. It will be fitted with a two-speed high/low range gearbox and have 15-inches of ground clearance along with 10-inches of wheel travel.

That should make the vehicle very capable off-road should anyone spending $125,000 on an SUV want to go off-road. The pickup version is called the B2 and has the same specifications. Both versions of the EV will be able to tow 7500 pounds and have a 5201-pound payload capacity. 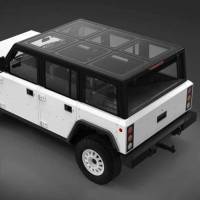 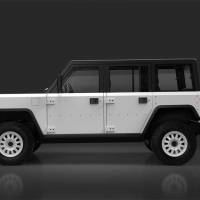 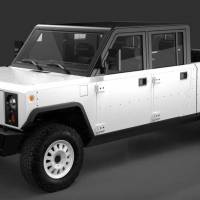 Each also have a fancy pass-through door and disc brakes all around. The massive battery packs inside the vehicles are 142 kWh units. Exactly how far the vehicles will be able to drive per charge and how fast they will charge remains a mystery. Neither of these vehicles particularly look like a six-figure truck or SUV, and we think Bollinger will sell few.