Bitcoin, the online currency that looks to revolutionize how we look at money in an online environment, is rising in popularity. However, in order to create Bitcoins, you have to mine them first, meaning that you give up a certain amount of computational power in order to process the creation of Bitcoins (similar to Folding@Home). In fact, Bitcoin mining is such a huge thing right now, that the entire mining network is faster than most of the world’s fastest supercomputers combined.

According to Bitcoin Watch, the entire Bitcoin network has reached one exaFLOPS, which may not mean anything to most people from the face of it, but compare that statistic to the world’s most powerful supercomputers and it’s quite jaw-dropping. One exaFLOP is over eight times faster than the combined speed of the top 500 supercomputers in the world.

FLOPS is a term that you may have seen most in graphics card specs, and it stands for “Floating-point Operations Per Second,” or how many math problems it can do in one second. An exaFLOP can calculate one quintillion math problems per second. Compare that to the most powerful supercomputer in the world currently (IBM’s Sequoia, pictured below), which only does a measly 16.3 petaFLOPS (0.0163 exaFLOPS), and you really have something. 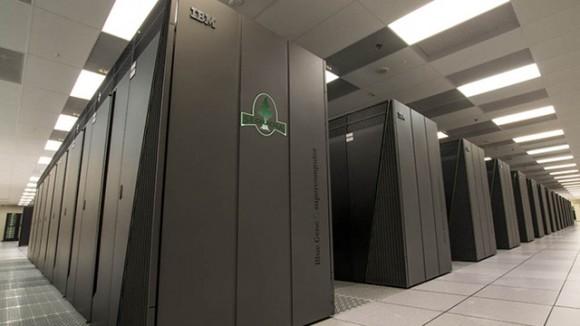 However, some people may be quick to point out that Bitcoin mining technically doesn’t operate using FLOPS, but rather integer calculations, so the figures are converted to FLOPS for a conversion that most people can understand more. Since the conversion process is a bit weird, it’s led to some experts calling foul on the mining figures. In any case, though, the conversion comes out to one Bitcoin mining hash equaling 12.7 thousand FLOPS.

What is Bitcoin anyway? It simplest of terms, it’s a currency that only lives online, and it’s been quite controversial ever since its inception. There’s no central bank to monitor the currency, and it uses peer-to-peer networking for transactions, with no middleman to pass along the currency (like a bank). Furthermore, there’s no serial number attached to Bitcoins, so they’re untraceable, making it a good medium for illegal transaction, but also a good thing for privacy advocates. In the end, Bitcoin is still very young, and there are very few places that accept it, but PayPal is thinking about hopping on board, so it could be a matter of just a couple years before we see it take off, but it’ll most likely be a fight in order for Bitcoin to gain ground.