Mass Effect 3‘s multiplayer is definitely a fun way to pass the time, but if you’re like me, you bought Mass Effect 3 for the single player story. Disappointingly, single player DLC has been hard to come by with Mass Effect 3, while BioWare seems to release multiplayer DLC every other week. That’s all about to change with BioWare’s upcoming Leviathan and Firefight DLC, and today the studio dropped some details on both in a post on the BioWare blog.

Leviathan is a story-driven piece of DLC that takes place during the events of Mass Effect 3 proper. In it, players will be tasked with finding Leviathan (which appears to be a Reaper) and using it in the battle for the galaxy. As you attempt to find Leviathan, you’ll learn more about the “dark history” of the Reapers, and we’ll even be getting a glimpse at their origins. In addition to the new story content, Leviathan also unlocks new areas of the Citadel to explore, adds a couple new weapons, and will introduce us to some new characters. BioWare says it will be available later this summer for PC, PS3, and Xbox 360 and will cost $10 or 800 MSP.

Firefight is the less substantial of the two, as this one is merely a weapons pack. Adding seven weapons in all, the pack comes with two weapons that are designated as “powerful” with the other five being called “bonus weapons.” This one will be available quite a bit sooner than Leviathan, arriving on PS3, PC, and Xbox 360 on August 7 with a price tag of $2 or 160 MSP. 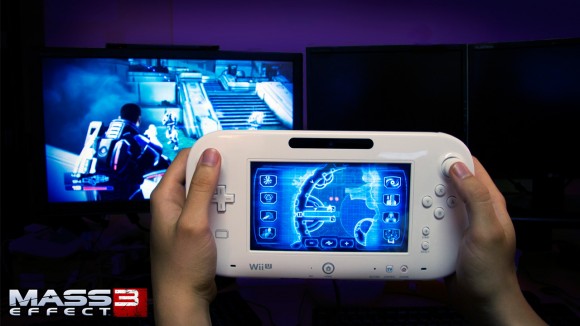 BioWare also took the opportunity to announce that Mass Effect 3 will be a Wii U launch title. Of course, we still don’t know when the Wii U is launching, but day-one purchasers can rest assured that Mass Effect 3 will be there right alongside it whenever it arrives. Other than that, there wasn’t too much news about the Wii U version, except that it will sport new controls (obviously) and it will come with bonus DLC, including the Extended Cut. Now if Nintendo would just give us that Wii U release date, we’d be set!