Anthem‘s release date is quickly approaching, but before it arrives, BioWare and EA have lined up a couple of demos for the game. The first demo, which is coming up this weekend, is limited to VIPs – that means people who have either pre-ordered the game or are subscribed to EA Access or Origin Access. BioWare detailed what players can expect from the VIP demo today, as well as confirming the times it’ll take place.

The Anthem VIP demo kicks off tomorrow, January 25 at 12:00 PM Eastern. It’ll run through January 27, but BioWare hasn’t given a precise end time for it. Those who are granted access to the VIP demo will also be given three different codes to invite friends.

Those who pre-ordered digitally though EA, the PlayStation Store, or the Xbox Store don’t need to do anything else to be included in the demo. However, if you pre-ordered a digital copy elsewhere or opted for a physical copy pre-order, you’ll need to enter the code you were given by the retailer over at the Anthem website. The demo is available for pre-loading now on PS4, Xbox One, and Origin, but obviously, it won’t unlock until tomorrow.

You won’t be able to get your friend codes until you’ve booted up the demo for the first time, and after you’ve done that, you once again need to head to the Anthem website to receive them. BioWare also shared a list of minimum and recommended PC specifications for the Anthem demo, so check below to see if your computer is up to the task of running this game:

If you haven’t pre-ordered Anthem (give yourself a pat on the back for that one), you’ll still be able to participate in a demo, just not the one this weekend. Next weekend, beginning on February 1, BioWare and EA will host a demo that’s free for anyone and everyone. We imagine it’ll follow the same kind of structure as this demo, with pre-loading going live a couple of days before on all of Anthem‘s supported platforms. 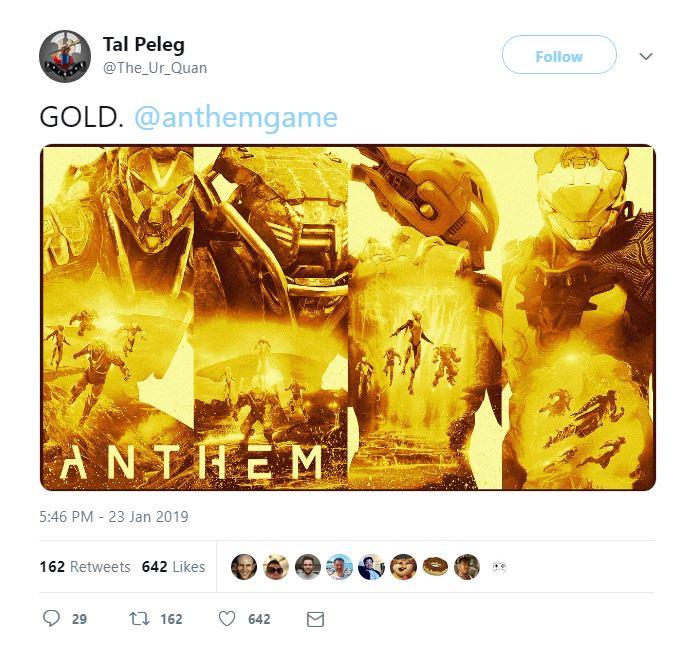 In other Anthem news, BioWare lead cinematic animator Tal Peleg recently tweeted that the game has gone gold. That, of course, means that the game has been finished and is headed to manufacturing so physical copies can be prepared for launch. It also means that barring some kind of unforeseen disaster, Anthem will indeed meet its release date and won’t be suffering more delays.

Anthem was originally scheduled to launch in late 2018, but EA and BioWare ended up moving that release date back to early 2019 before eventually settling on February 22. You can read more about preparing for the demo over on EA’s help site, and be sure to head down to the comment section and let us know if you’re planning on participating in either the VIP demo this weekend or the open demo next weekend!