The best mobile MMORPG games of 2016

Before mobile gaming was a thing, before even smartphones were a thing, gamers have been playing on the Internet in what was commonly regarded as MMORPGs, short for the wordy Massively Multiplayer Online Role Playing Games. Games like World of Warcraft, Guild Wars, Lineage, and more filled gaming news and chats, The advent of mobile devices, as well as the rise of MOBAs (Multiplayer Online Battle Arena), have mostly pushed MMORPGs to the sidelines.

As smartphones become more powerful, Internet access move ubiquitous, and mobile users mode engaged, MMORPGs have started to make a comeback, but on a smaller screen and with somewhat fewer controls. Here are our top picks for this year’s best MMORPGs, with some dating back even older, proving their massively multiplayer appeal.

Spelling out an acronym doesn’t exactly explain what something is sufficiently. Especially when the very term RPGs has somewhat been diluted on mobile. For the purposes of this list, here are some of the criteria that determine what an MMORPG is, or at least what makes it a good one.

RPGs, by their very definition, is about taking on the roles of a specific character, whether one that’s already made up or one that you make up yourself. In practice, that has translated to being able to customize your player character or PC, and we’re not just talking about the way they look.

Many mobile RPGs these days limit customization mostly to changes and appearances in new skills learned. “Full” RPGs, on the other hand, let you really control how your character grows, from the stats you put in to the skill trees you follow. And yes, usually you also pick out your character’s looks.

MMOs are differentiated from “online games” by the sheer number of people you get to see at one time. Depending on the server capacity and number of logged in players, you will see crowded marketplaces no different from the real world.

Hardware limitations on smartphones, as well as server limitations, have made that difficult in the past, but times, and technologies, are changing. Still, many mobile games that brand themselves as MMORPGs don’t exactly use this convention and, as we’ll see later, confine players to their own home screens, limiting social interactions to chat.

Online: living in the cloud

Most mobile games these days use an Internet connection, but mostly to download updates or notices and upload player stats and progress. In terms of gameplay, however, they might as well be offline games. In complete contrast, MMORPGs need to be played with an active network connection, not to mention a good one.

Lag can mean life or death to players. That does present a problem for those who don’t have easy access to a good Internet connection. But, then again, there are also plenty of mobile games to enjoy that aren’t MMORPGs.

Saving the world: one quest at a time

While the previous factors mostly deal with game mechanics and technical aspects, an equally important criteria for an MMORPG, especially a good one, is the way the game content flows. Most mobile RPGs, be it online, offline, or “action”, follow a cookie cutter ladderized progression system. You start from a home screen, dive into a dungeon to kill enemies, and then go back to the home screen again. Rinse and repeat, with a few side trips to shops, until you reach the end.

The game’s world is practically non-existent aside from the dialog and a few dungeon maps. True RPGs, however, drop players right in the middle of a town or forest, allowing them to interact with NPCs, travel from town to town, and, in the case of MMORPGs, interact with other players. Sure, you might be able to go back and forth to your starting town, but it will be because you chose to do so, not because there’s really nothing else to do.

Gameloft’s Order & Chaos can probably be thought of as the granddaddy of mobile MMORPGs. It was pretty revolutionary when it launched, with the mobile market populated by games like Angry Birds and Candy Crush. Fast-forward years later, Order & Chaos now spans two MMORPGs, a MOBA, and a card game. The graphics may seem dated, especially the first Order & Chaos Online game that’s still running to this day, but if you want to experience an MMORPG close to PC standards, you shouldn’t miss this one.

Both OC 1 and 2 follow the basic RPG tropes of choosing a class and going on quests to save the world. In terms of game mechanics, there is an overlap between the two, yet still have significant differences to distinguish them from each other, aside from graphics quality, of course. Both are still being updated, however, so it might be confusing which one to pick. You won’t go wrong choosing either or both.

Many PC games are starting to make their way to mobile, whether as direct ports or as new, mobile-first titles from an existing franchise. That is true for some offline games and is also just as true for some MMOs. MU Online has been one of the earliest MMORPGs from the East to make it big, and now it has finally reached mobile.

MU distinguished itself from other RPGs of its period by limiting character classes to three. And it hasn’t changed that in its mobile version, MU Origin. MU was also characterized by over the top flashy effects and humongous wings, and fans will be pleased to know that those are still here, just in smaller servings.

Another classic MMORPG hailing from Korea is Ragnarok Online. In a growing world of 3D games, Ragnarok Online opted to go old-school, but not quite. The game mixed elements from the popular Dungeons & Dragons RPG system with anime-looking aesthetics and 2D character sprites in a 3D world. 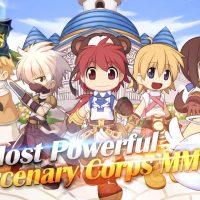 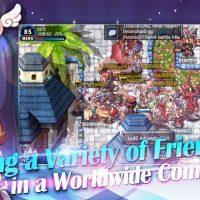 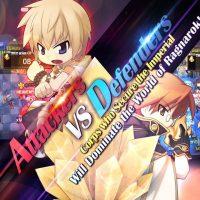 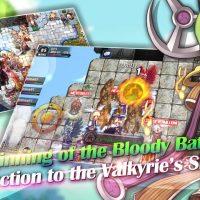 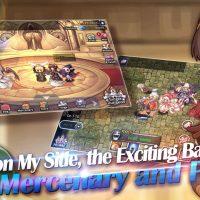 Sadly, Ragnarok: Path of Heroes is just small fraction of the full experience. For one, everything is now in 2D, with no 3D in sight. The choices of job classes are also limited and locked to specific genders. Still, for those looking for a more old-school MMORPG experience on mobile, especially one that won’t tax your phone’s resources, this is a game worth looking into.

If, however, you wanted something a bit more modern and specifically made for mobile, then Asobimo’s Iruna Online and Toram Online might be more to your liking. Seeing it as something like a “3D Ragnarok” isn’t exactly a stretch. It has basically the same game mechanics, and even some similar character classes. You might even draw parallels to some monsters in the game.

The dichotomy between Iruna and Toram are similar to Order & Chaos 1 and 2, both branching and developing independently, with some overlap in themes and mechanics. Aesthetically speaking, the games might seem geared for kids, but, as any avid MMORPG player will attest to, this is no child’s play.

If you’re a bit tired of the usual Western high-fantasy setting, the Asobimo also has an MMORPG for you. Izanagi Online bills itself as a ninja MMORPG, but banish any thought of stealthy, shadowy figures or Naruto. These are not your usual ninjas. The setting and lore do speak of ninjas, but it’s more like a mish-mash of fantasy, ninjas, and guns. Yes, guns. You still do have character classes, but classes can sometimes use the same type of weapon with different results, like dual pistol wielding mages and archers.

The graphics are nothing to write home about compared to more recent mobile games. But if you’re craving for a different setting, non-standard game mechanics, with an interesting plot, Izanagi will definitely pique your curiosity.

If you’re looking for an MMORPG that comes as close to PC MMOs as possible, then you need not go farther than Age of Wushu Dynasty. Made by the very same people behind the PC Age of Wushu, Dynasty is designed from the ground up to be optimized for mobile, while retaining the same elements that made Age of Wushu popular. Specifically, the martial arts theme, and Wuxia flying skills.

Like in the PC version, you get to choose your faction, the equivalent of character classes, with some factions locked to certain genders. Unlike the PC version, you don’t exactly have full control over the view and have more limited access to skills, limitations dictated by its mobile nature. Fans of old Wuxia films and lore shouldn’t miss the chance to try Age of Wushu Dynasty.

If, on the other hand, you prefer to go a more futuristic and sci-fi route, then Stellacept, a relatively newer title coming from Asomibo again (you’re probably seeing a pattern by now) might tickle your fancy. Unlike the usually high-fantasy, Wuxia, or ninja themes of other games, Stellacept takes you a few decades into the future and a few lightyears away from Earth. It’s still pretty much fantasy, except coated in science fiction. 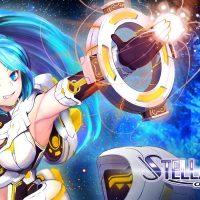 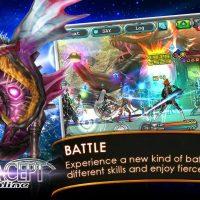 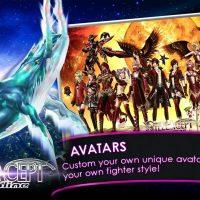 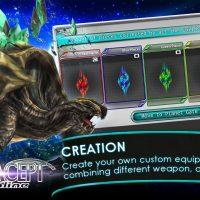 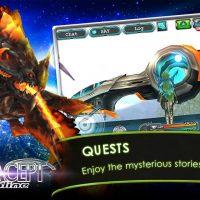 Stellacept also differs from most of the MMORPGs we’ve seen so far in that it isn’t class-based. Instead, it’s the weapons that you use that determines the skills you get, not the other way around. And since each character can actually equip a main weapon and a sub weapon, you can practically follow two skill trees. The weapons are also a bit different, with guns, spheres, and discs joining the usual swords and bows.

The youngest in the list as far as development and release goes, Adventure Quest 3D happens to also have the oldest legacy among the other seven. It traces its roots back to a 2002 browser-based Flash game simply named “AdventureQuest”, predating many Flash and browser games that would take the market by storm for a while. After more than a decade, developers Artix Entertainment finally gave in and decided to create a 3D successor of the title.

But AdventureQuest 3D is more than just a jump from 2D to 3D. It is very interesting in many aspects. It’s still unfinished and raw at the moment, currently still in Open Beta, which means development will be visible for all to see. But the biggest highlight is that the game features multi-platform gameplay. That is, the same game and the very same world are available on PC, Android, and iOS. You can play on any of those and switch between them as the your heart or fingers desire.

The wave of new mobile games is far from over. While there are, admittedly, hundreds of clones and look-alikes, there are a few titles that do shine brightly amidst the grey clouds – and there are even more coming soon, both from established MMORPG makers like Perfect World Entertainment, to popular anime tie-ins like Sword Art Online, to never before heard of but daring startups and indies.

With mobile gaming becomes even more serious business, sometimes even less mobile (like in Android PCs and TVs), the opportunity to produce a true MMORPG with depth and quality gets bigger as well.