WiFi 802.11n promised us boosted range over older, slower standards, but trying to cover a big house or reach a home office at the bottom of the garden can still exceed the abilities of most consumer wireless routers. If you’ve a Mac, and patchy internet is getting you down, Rokland Technologies’ BearExtender n3 promises to fix things without breaking the bank. An external, boosted WiFi-N adapter, the BearExtender n3 has a $44.97 price tag and the promise of a tenfold increase in performance. Check out the SlashGear review after the cut.

In the box there’s the BearExtender n3 itself, together with a USB memory stick with the required software and two USB cables. Setup is straightforward (as long as you have one of the compatible systems; more on that later): pick either the short (metal flex) or the long (regular) USB cord, plug in the BearExtender n3 and load the drivers from the USB stick. The regular internal AirPort WiFi card is disabled and the notebook uses the new, external card instead; obviously you’ll need to reconfigure things for your network, but once connected it’s just like using the standard WiFi only with dramatically broader range. 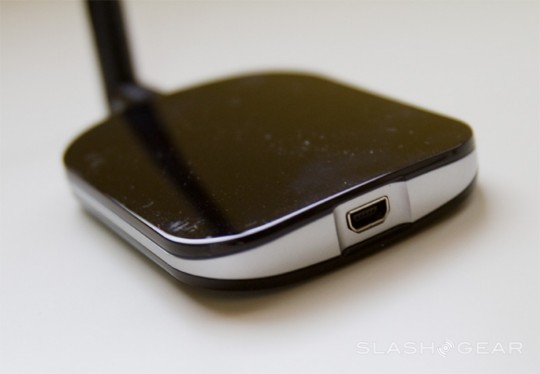 Rokland suggest the BearExtender n3 is over 10 times as powerful as a regular internal AirPort card, with a 700 mW maximum power output compared to just 32 mW from the regular component. We tested it with an Apple AirPort Extreme 802.11n router and found that we could almost double the distance between it and the notebook. Much of the time the signal strength read 100, and despite the bulk of the antenna, it clipped to the lid of our test MacBook Pro and proved little of a hinderance. Although range was improved, we did experience the occasional unexpected disconnection, usually while trying to move large files or stream video.

It’s worth noting that the BearExtender n3 only supports the 2.4GHz band, not the 5GHz offered by an increasing number of wireless routers these days. We didn’t experience any issues with neighboring networks, but if you’re in a particularly built-up area with lots of other WiFi connections around you, that could present a problem. 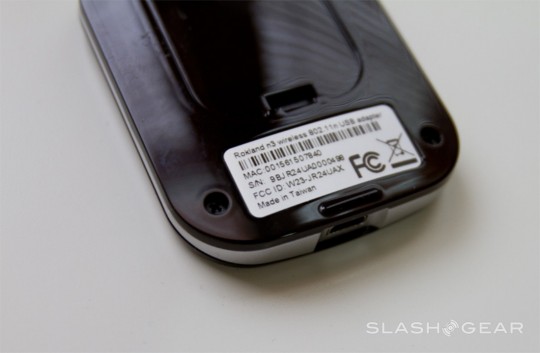 Also potentially frustrating is the absence of 64-bit drivers. Apple notebooks running Snow Leopard automatically boot into 32-bit environments, so you can use the BearExtender n3 with no problems, but if you have an early 2008 or early 2009 XServe Server or Mac Pro running Snow Leopard (both of which systems boot into 64-bit mode) you’ll have to wait for Rokland to push out some suitable drivers. Unfortunately there’s no timescale on when we might see those released. If you’ve got an OS X 10.3, 10.4 or 10.5 system then you should have no problems.

Still, when boosted wireless network adapters are generally twice the price (or more) of the $44.97 BearExtender n3, and adding in an extra AirPort Express to act as a signal repeater has the inevitable setup headaches (plus costs more than twice as much too), the Rokland option looks more and more sensible. Absent 64-bit drivers could present a headache, and for a few users the lack of 5GHz support could be an instant deal-breaker, but if you’ve ever despaired at a flaky, patchy WiFi connection in the home or office then the BearExtender n3 is a cost-effective way to address it.