BBM users on Android stick around longer, so says study

We might have thought that BBM, once one of BlackBerry’s defining products, was on its death throes before it finally landed on Android. But once it did make its way to the platform, it seems that the messaging service has found a bit of reprieve. According to a study done by analytics provider Quettra, it might be even more than that. Its findings reveal that among other social networking and messaging apps on Android, BBM has the second highest retention rate among users, something that BlackBerry is only too happy to point out.

To be fair, BBM’s adoption on Android was actually impressive to the point of being somewhat surprising. For something that was long overdue and almost thought of as dead, users seemed to have flocked to the service the moment it became available, numbering millions in downloads just within the first 24 hours. For BlackBerry, that expected. For those who never thought BBM would survive to see another day, it was probably a mild surprise.

Perhaps even more surprising is the fact, at least based on this study, that BBM has a rather high retention rate. As much as 93 percent of new users stuck around after 30 days and although the numbers did go down after 60 and 90 days, it wasn’t a mass exodus as some other messaging apps and services experienced within that same period. Only Facebook Messenger apparently does better than everyone else. Included in the study where the likes of WhatsApp, Twitter, Snapchat, and Instagram, all of whom fared rather poorly. 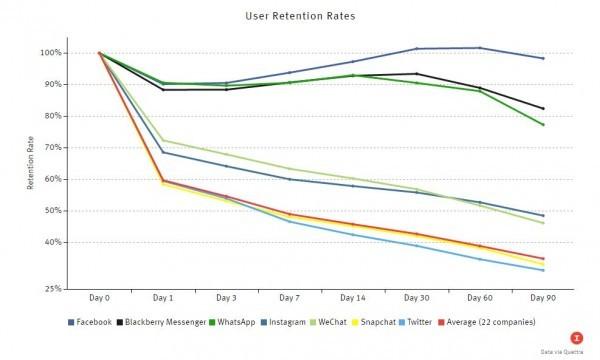 Of course, Quettra’s study only shows retention rate of new users within the first 90 days. It doesn’t exactly portray the entire picture for the overall number of users for each service, as well as returning users. It would probably be a bit of a jump to conclude from this chart that BBM has more overall users than Twitter. For now, we can, and probably should, give BlackBerry the commendation of being able to keep users around far longer than others. At least for the first 90 days.