Audi gets an A for showmanship, introducing the world’s first 95kWh battery for the upcoming all-electric Audi e-tron SUV in a lighting-filled Faraday cage. Typically, you wouldn’t want the sort of high voltages your EV relies on to be visibly dancing around the car, but a big battery deserves a big splash. When it reaches the road, mind, the e-tron’s bleeding-edge power tech will be an even bigger deal.

As battery-electric vehicles tip closer toward the mainstream, two key concerns among consumers have lingered. The first is driving range, or “range anxiety”; the second is charging speed. For a new EV to be successful, Audi figured, it would need to drive far and charge fast.

Here’s the headline stuff, then. The Audi e-tron will use a 95 kWh battery that, on the European test cycle, is rated for up to 400 kilometers or around 249 miles. It’s also capable of fast charging, at up to 150 kW.

Since you can’t normally see the electrons doing their thing in the lithium-ion cells, Audi took us to a Faraday Cage at the Siemens high-voltage test bay in Berlin. There, there’s a vast parabolic hall which houses an equally massive impulse voltage generator, the size of a house and rising to the top of the 82-foot high roofline. The pulsating crackling over the Audi e-tron’s roof was certainly fascinating to watch, but the big takeaway is that, though not quite as fast as lightning, Audi has cracked the fast charging problem.

How fast, you might ask? When using a 150 kW charging station, the production version of the e-tron electric SUV takes approximately 30 minutes for an 80-percent charge. To top off the battery to 100-percent – purposefully slowed for both safety and to prolong the health of the cells – it’ll take another 30 minutes. Putting that into perspective, a 50 kW charger takes about 80 minutes, or 40 minutes for a 100/120 kW charger. 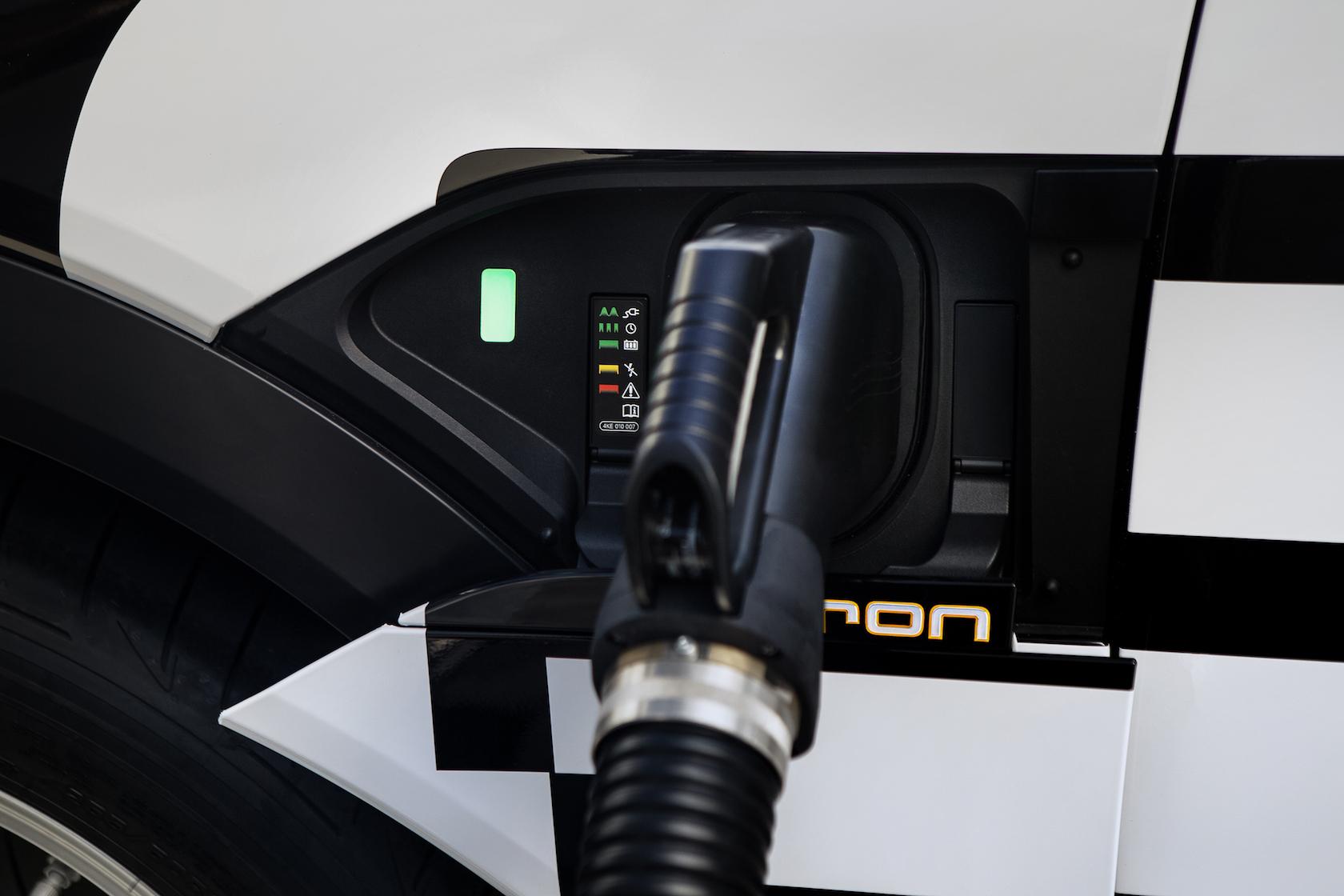 Audi’s research showed that, for the most part, people stop for approximately 30 minutes for breaks. They’re not just gassing up their cars; they’re also using the restroom or grabbing something to eat. With a typical refuel taking around seven minutes for gas or diesel, along with paying, suddenly a 30 minute EV charge doesn’t seem outlandish at all. 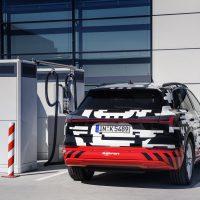 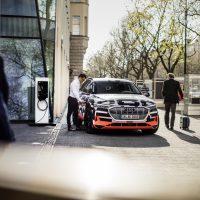 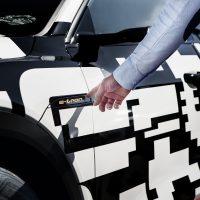 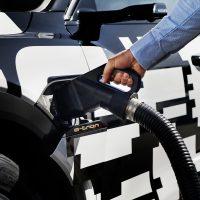 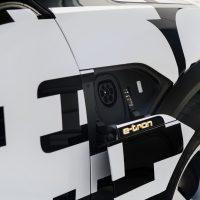 Even so, Audi still expects only 5- to 10-percent of drivers to actually use this sort of lightning-fast charging. For most EV owners, the recharge process takes place at home or at the office or, most likely, a combination of the two. The e-tron SUV will ship as standard with an onboard 11 kW charger but, as of 2019, Audi will offer a second onboard charger for a total of 22 kW charging on an Audi connect charging system tapped into a smart home electricity supply.

Range and charging speed aren’t the only concerns that EV drivers have, of course. Battery safety is also a concern. Audi’s 95 kWh battery has 36 cell modules, each roughly the size of a shoebox; each contains twelve pouch cells, with aluminum-coated polymer skins. In total, that means 432 lithium-ion cells safely protected inside an aluminum crash structure, which is held by a housing tray. 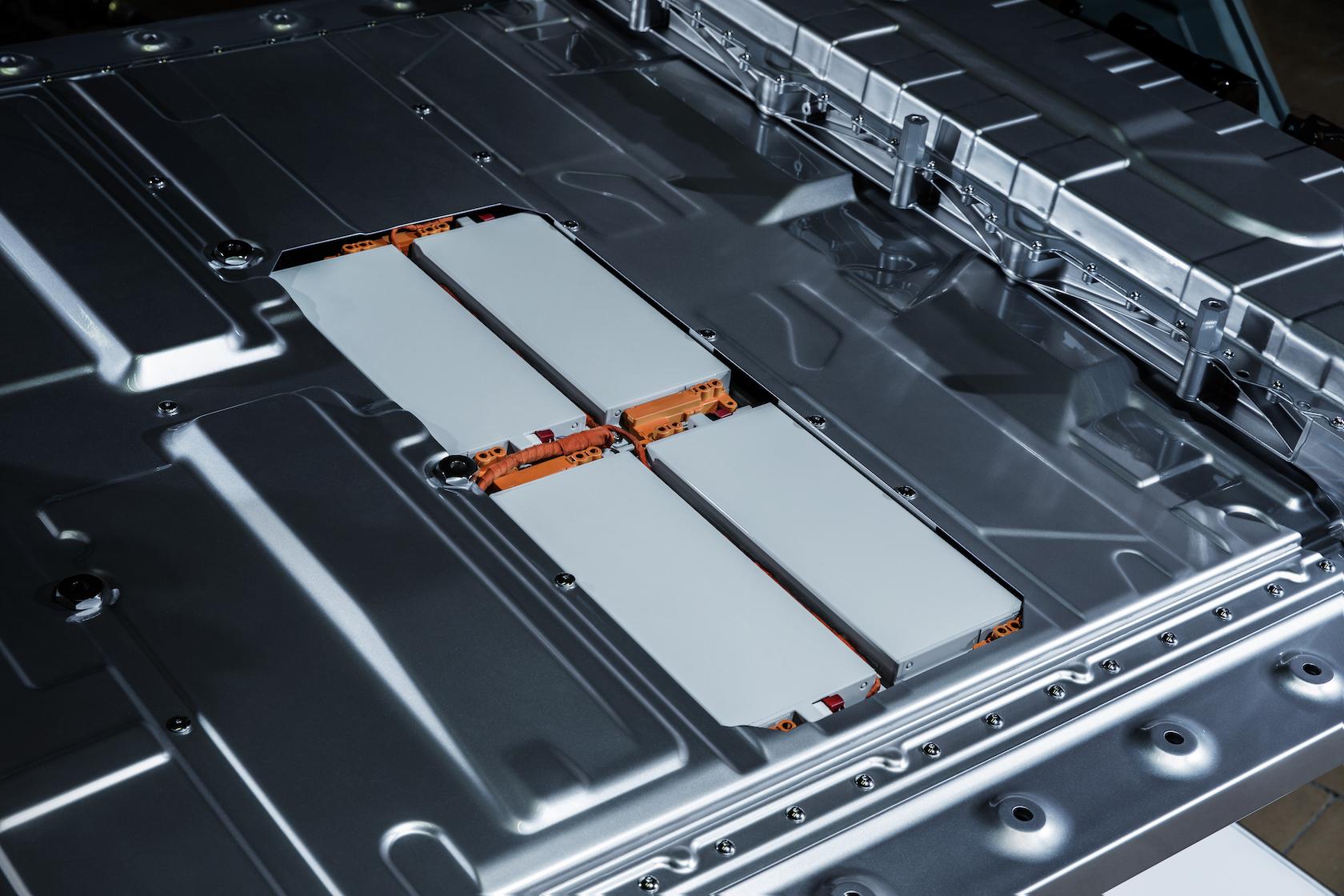 Audi puts them all in a wide, flat slab in the e-tron’s wheelbase, a roughly 1,543-pound block that, though contributing significantly to the SUV’s overall weight, helps keep the center of gravity low. With its thick, side reinforcement battery frame wrapped around the housing tray, it’s about the size of a bed: 7.5 feet long, by 5.3 feet wide, and 13.4-inches thick. The thicker side beams help to absorb and disperse the force of impact during a side impact. 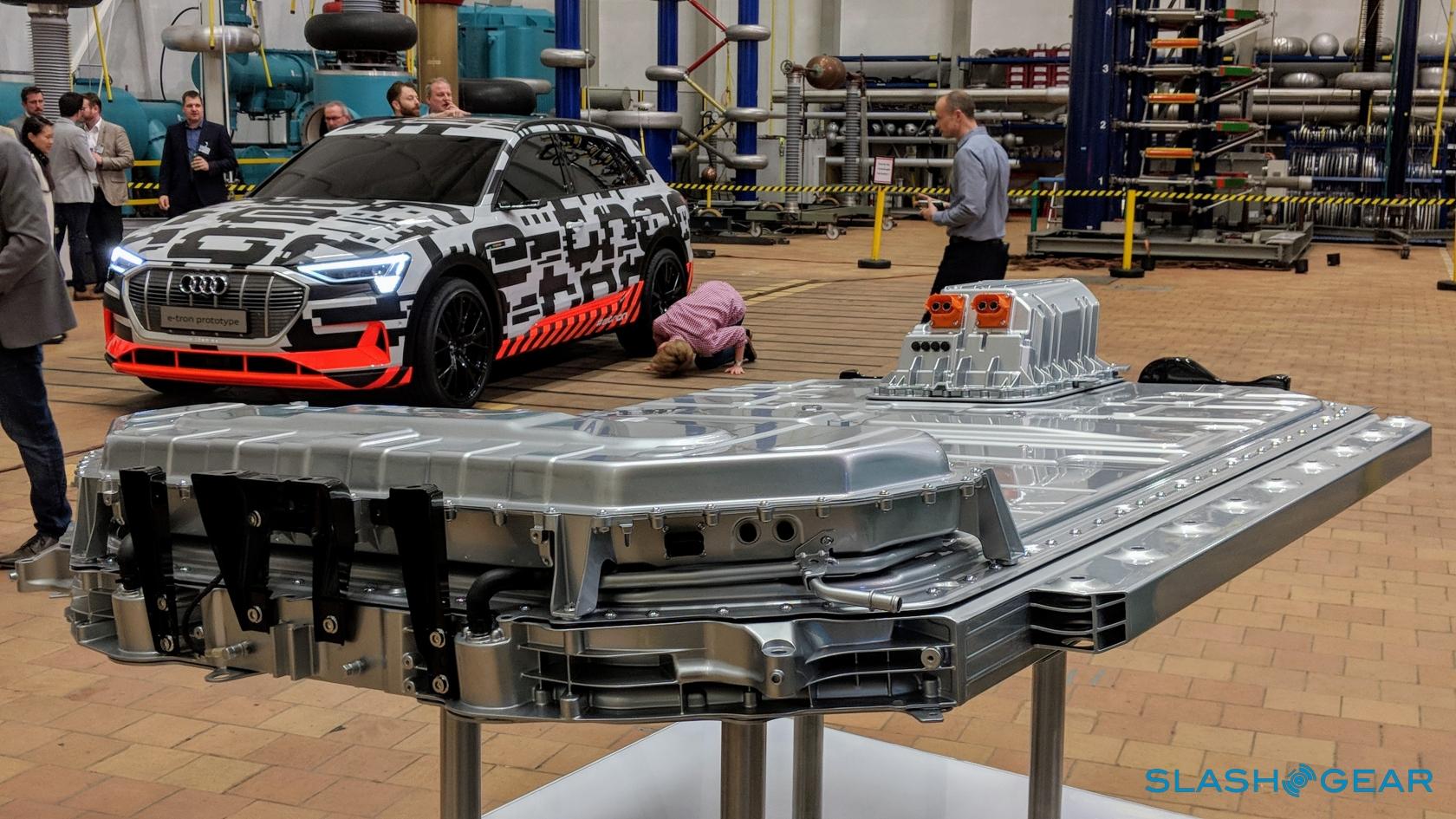 Instead of integrating the cooling system between cell module, Audi separated it out. The cooling system for the battery is attached to the outside of the housing beneath the cell chamber. By design, in the event of a collision where the cooling system gets punctured, it was explained to me that the coolant, made up of water and anti-freeze doesn’t make contact with the cell module, which in turns could react to cause a fire. If all goes well, the liquid simply drains down and out through the lower protection cover, which also doubles as a skid plate and helps with the airflow beneath.

Here’s the breakdown of what’s happening: cell modules get hot, producing heat so that heat must go somewhere. The battery housing and the cooling system are bonded together using a newly developed thermal conductive adhesive.

The gaps between the cells and the extruded aluminum housing are flooded with a thermally-conductive gel which acts as the cooling system. 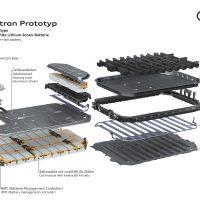 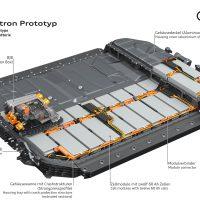 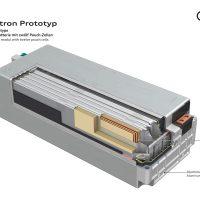 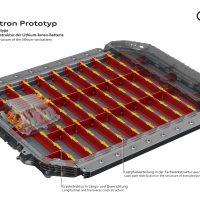 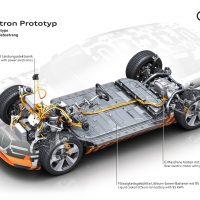 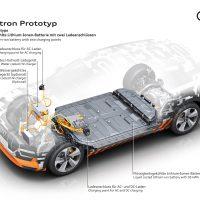 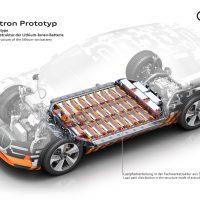 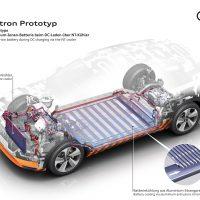 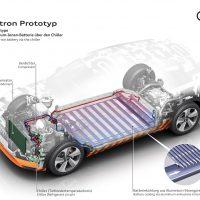 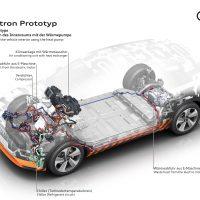 This system is suitable for dealing with heat under normal load condition, but under extreme heat condition, a secondary system consisting of a chiller module will kick in to rapidly cool down the battery cells. It’s worth noting that in extremely cold condition, the system can also be used as a heat pump to raise the battery temperature.

Eventually, Audi plans to use the same strategy with modular batteries, which will allow the company to roll out different sizes of the vehicle with different ranges and capacities. The batteries are also designed to be readily separated from the rest of the car, for maintenance or repair. There’s a single plug connection between it and the fuse box.

The e-tron SUV’s charging port is in the driver-side fender, and Audi couldn’t resist a little showmanship there. It’s motorized, for a start, revealing not only the illuminated connector but the charging status LED. Pull the plug out, meanwhile, and after five seconds the flap closes automatically. That means you won’t accidentally drive off having left it open.

In Europe, Audi – and the rest of the Volkswagen group – is working with BMW, Daimler, and Ford on a fast charging network. That’s expected to offer up to 150 kW charging at nearly 200 stations – each with six charging ports – by the end of 2018. By 2020, meanwhile, that number will have doubled.

The US situation is a little less clear. VW Group’s Electrify America startup announced plans recently to install DC fast chargers at more than 100 Walmart locations across 34 US states by June 2019, part of an overall scheme to locate 2,000 chargers in all across 484 sites by the end of next year. It’s unclear if they’ll use the clever Plug & Charge system, however, that will be rolled out in Europe in the same timescale. That will do away with charging scheme membership cards by integrating authentication right into the e-tron’s charger port. The same technology will be available to lock-down home chargers, too. 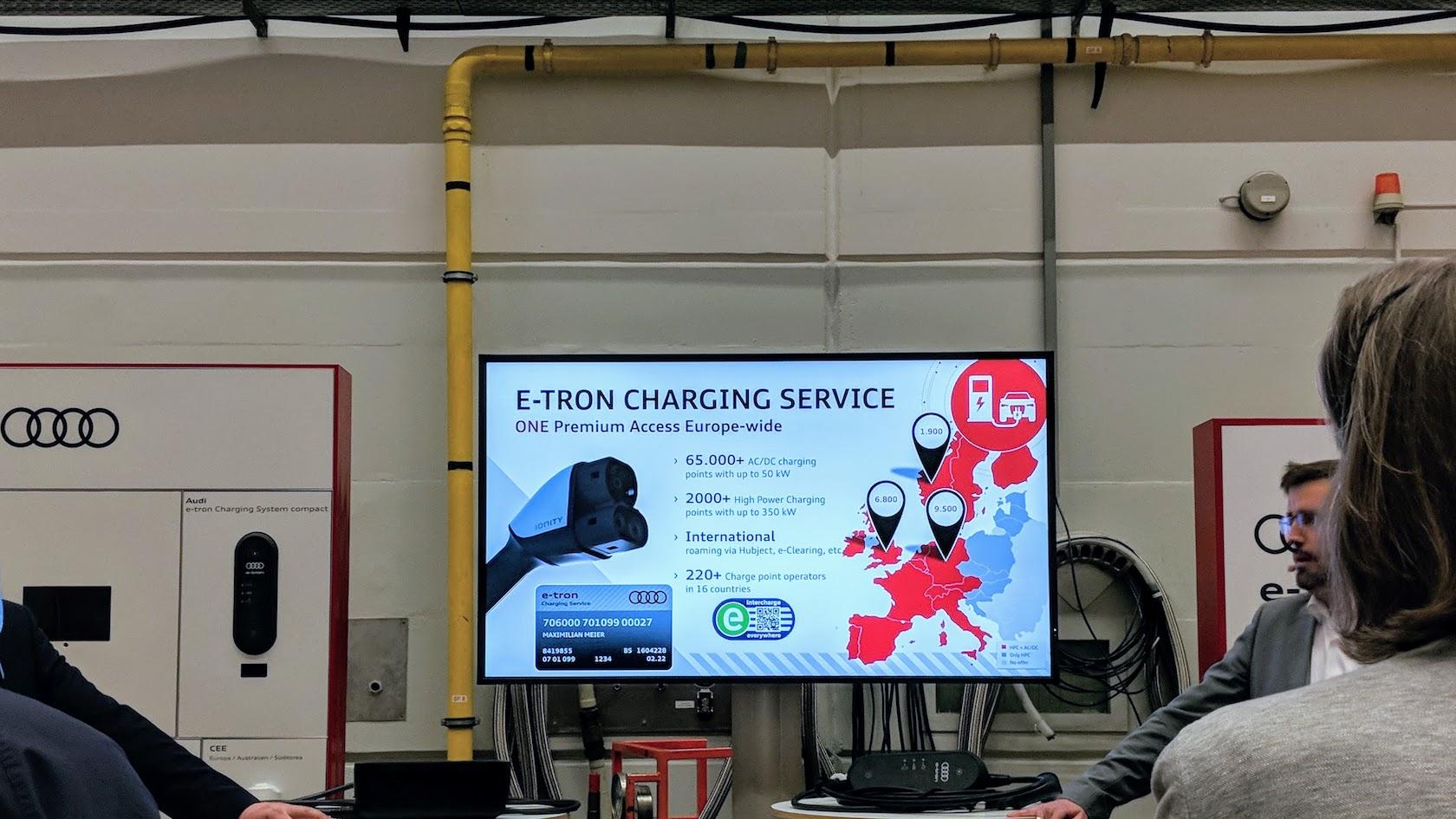 As for finding locations, that’s been baked into both the e-tron’s navigation system and the companion myAudi app. The former plans routes with not only traffic conditions but charger locations along the way taken into consideration; it taps into real-time charger status, too, including both whether there are unoccupied bays and the rate of charge they’ll deliver. DC fast charging stations are generally prioritized, but the car is smart enough to compare the distance to there with the remaining range and adjust to a closer location if required. All that data is then mirrored in the smartphone app, which can ping out notifications when the charging process is complete.

Some big questions still to answer

Audi is certainly making all the right noises about bringing electrified driving mainstream. All the same, we still have a few outstanding questions. The most significant is range: the US EPA electric car testing cycle is fairly different to the European WLTP testing cycle, and that 249-mile figure could change significantly by the time the e-tron SUV hits American dealerships. 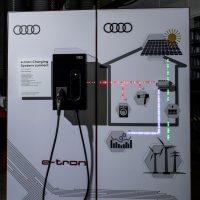 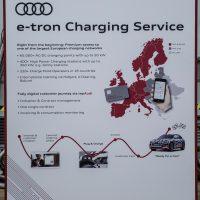 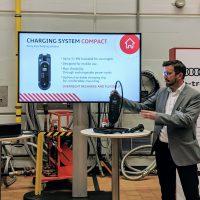 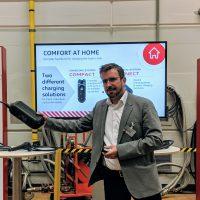 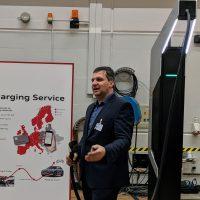 We also have lingering concerns about home charging. In Europe, Audi says, the expectation is that many homes will support three-phase AC charging up to 400 volts and 11 or 22 kW. It’ll offer an e-tron Pre-Check tool online, that will assess what sort of changes might be required for a home electrical system, too.

For US homes, the power situation will undoubtedly be very different. Level 2 charging typically requires some electrical work be carried out; Audi hasn’t said whether its ability to connect a qualified electrician in Europe with e-tron buyers needing upgrades will have a parallel at dealerships in the US. Similarly, while home energy management systems are increasingly commonplace in European homes, the same can’t be said for the US, and Audi hasn’t confirmed if it’ll be seeking out partners on American shores.

Even with those questions still outstanding, Audi’s progress in battery technology is more than a little exciting. 95 kWh batteries open up considerable range, and 150 kW charging make li-ion packs of that capacity actually practical from a recharge perspective. And, while it might not be the all-in-house ecosystem that Tesla has undertaken with its Supercharger network, the gaping hole in infrastructure that has left many would-be EV drivers cautious finally looks like it’s being filled in. 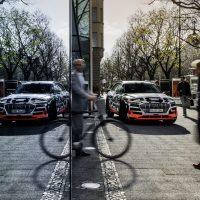 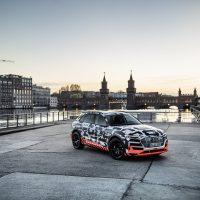 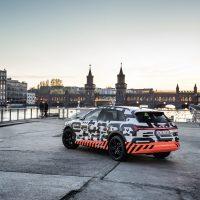 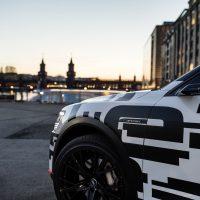 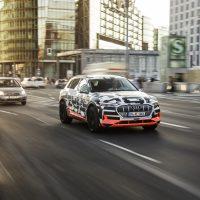 Of course, we still have to drive the production version of the Audi e-tron SUV. That won’t be a little while yet, ahead of its arrival at European dealers later this year.