All three of Audi’s driver crews were involved during the testing, including drivers Stéphane Peterhansel, Carlos Sainz, and Mattias Ekström. The rally car being tested is called the RS Q e-tron, and conditions during the testing were extreme. The automaker reports temperatures reached well over 40 degrees Celsius at times, and sandstorms challenged the testers.

Part of the reason for testing in Morocco was to subject the prototype racing vehicle to conditions it hadn’t encountered before. By subjecting the car to new conditions, new problems arose in the high temperatures leading to testing interruptions and new solutions to the problems before testing could continue. The team expects temperatures during the Dakar Rally to be significantly lower than those encountered in Morocco.

One of the more interesting aspects of the RS Q e-tron is that it’s a completely electric vehicle. As with normal electric vehicles, the high-voltage battery remains at an optimum temperature for ideal performance. The drivetrain of the racing vehicle has two motor-generator units derived from those used in Formula E. Audi Sport developed the battery used in the RS Q e-tron. The battery gets charged while driving using an energy converter that includes an efficient TFSI engine from the DTM and a third motor-generator unit. 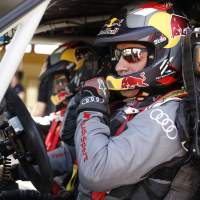 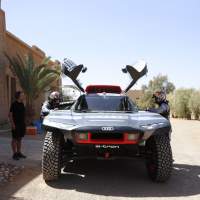 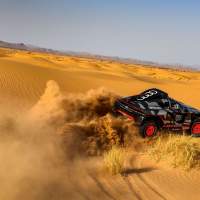 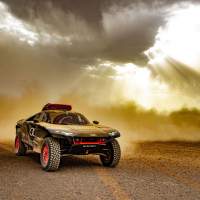 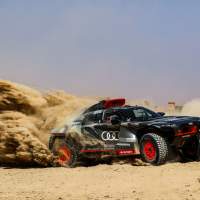 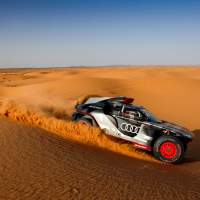 While the prototype vehicle is undergoing rigorous testing, Audi Sport has begun building the first competition car using chassis number 104. The team working on the racing car says that the prototype currently undergoing testing isn’t perfectly fitted, but the racecar will strive for perfection in terms of fit.