Audi is no stranger to bedazzling concept cars, but few stretch the imagination quite like the new Audi skysphere. More ambitious than the the e-tron GT Concept – which, three years ago, was a production-ready prototype – or the A6 e-tron Concept which itself looks almost ready for the showroom, it’s a vision of a Level 4 autonomous future that intersects with the recent grandsphere concept, formerly known as the Artemis Concept, but at the same time takes pains not to leave keen drivers out of the game.

Like the A6 e-tron and grandsphere concepts, the skysphere is an all-electric vehicle; here, that means a single electric motor pumping out 465 horsepower and 755 lb-ft of torque (750 Nm). But unlike the e-tron GT with two electric motors – and, indeed, Audi’s Quattro-biased production range – Skysphere is rear-wheel drive: better, so the automaker claims, to deliver the purity and essence of a traditional roadster. Boasting a 40:60 front and rear weight balance, skysphere is a real sports car with the soul of a grand tourer. 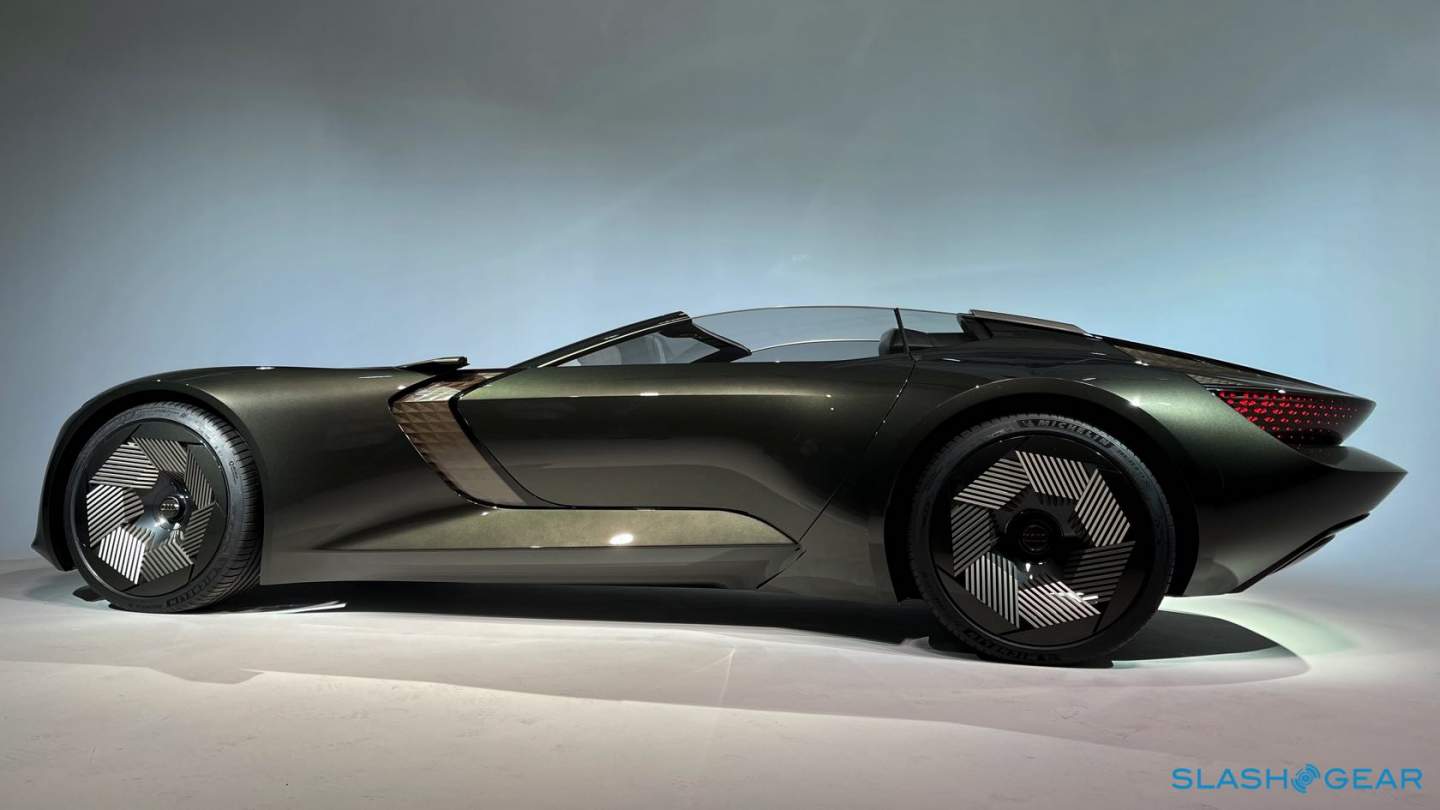 It certainly has the presence to merit your undivided attention, but skysphere has a jaw-dropping feature: the concept offers two different driving experiences by physically changing its wheelbase. Audi’s proprietary variable wheelbase system consists of electric motors and a “sophisticated mechanism” with body-on-frame components that slide to alter the wheelbase and length of the car by 250 millimeters, or almost 10-inches.

“It’s a car with a dual personality,” said Gael Buzyn, Senior Director of Audi Design Loft in Malibu, where the skysphere’s transforming shape was crafted. “It’s a grand touring car in autonomous mode but transforms into a true sports car when being driven.” The vehicle can also raise or lower its ground clearance by 10 millimeters when converting from GT to sports mode, and all the magic happens at the touch of a button.

In Sports mode, then, the Audi skysphere Concept is 4.94 meters long due to its reduced wheelbase. Switching to Grand Touring Level 4 autonomous mode, however, and the car measures 5.19 meters. This mode has a reconfigured interior with the steering wheel and pedals folded away cleanly, further enhancing space for a genuinely luxurious drive.

“It’s a perfect combination of comfort and performance,” added Buzyn. “We knew with today’s technology, the one that is building the revolution we’re going through like digitalization, electrification, and automation, that we could elevate the experience to a higher level and redefine the driving experience.”

The design inspiration for the Audi skysphere was the Horsch 853 roadster, a two-door German cabriolet built before World War II. Back in the 1930s, the Horsh 853 was the epitome of modern luxury with a long hood, swooping proportions, and a compact cabin.

Measuring a total of 5.20 meters in length, it had an equally majestic five-liter straight-eight internal combustion engine under its elongated bonnet. Buzyn and his team of brilliant designers took the iconic proportions of the Horsh 853 and reinterpreted it for modern times. “I did many many cars in my career, but skysphere is the most exciting showcar I’ve ever worked on with my team,” said Marc Lichte, head of Audi Design. “The Horsch 853 has been benchmarked in driving dynamics and comfort, and the Audi skysphere is a modern, very progressive interpretation of those two characteristics.”

It also has the bones to match its retro-modern roadster vibe. Underneath the skysphere’s shapely body is a double-wishbone suspension in the front and rear of the car, with the upper and lower wishbones forged or cast from aluminum.

No other suspension system can match or boost the negative camber of double-wishbones to offer unfounded road stability, and having this costly setup in a concept roadster is a sign of good things to come. The Audi skysphere concept also has four-wheel steer-by-wire steering with variable steering ratios. Damping is courtesy of new three-chamber active air suspension with individual chambers to offer a comfy ride in GT mode and sharper demeanor in Sports mode. The suspension system also gathers data from the navigation to compensate for the undulations on various road surfaces like a modern Rolls-Royce. The result, Audi promises, is a dual-personality of compliant ride or sporting firmness, despite the oversized and unique 23-inch aero wheels with 285/30 tires. 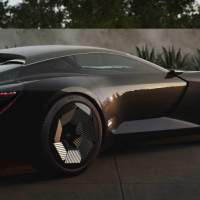 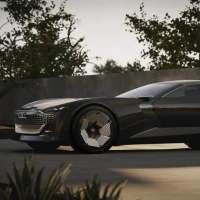 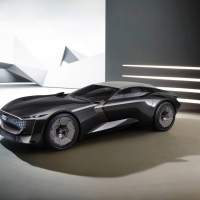 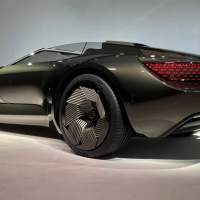 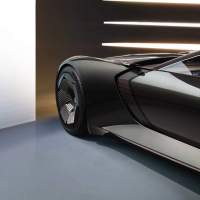 On the styling front, you won’t mistake the skysphere concept for anything but an Audi. It still wears the brand’s trademarked Singleframe grille, but with the cooling demands of an EV significantly different it now has a blank front with illuminated four rings and white LED lights on the sides. They can animate to show different visual effects. Typical of an Audi RS model, skysphere has flared wheel arches, a wider track, and short overhangs. 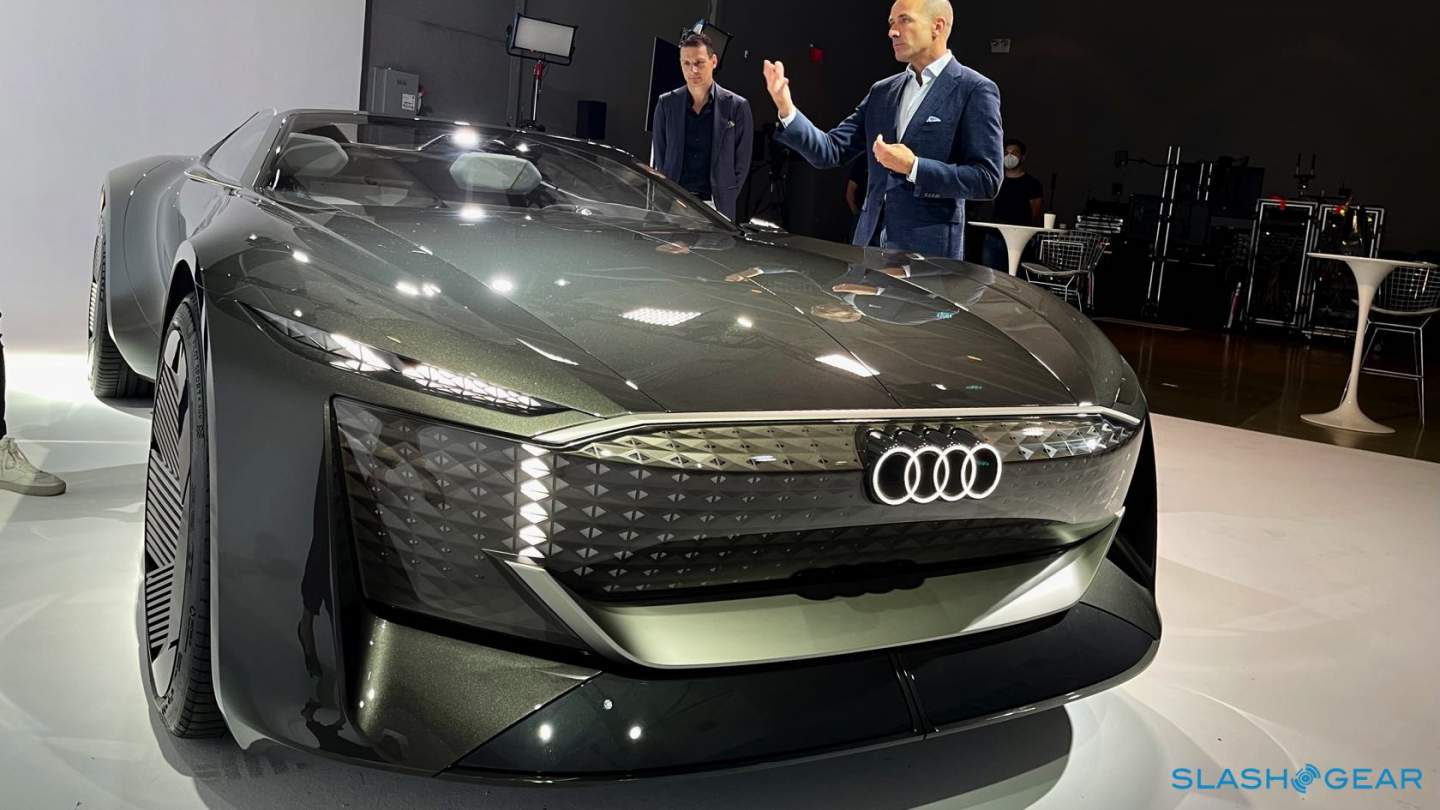 The rear end is as exciting as the front, meanwhile, combining the visual elements of a speedster and a shooting brake (think “two door sporty station wagon”) with large glass surfaces. The taillights are like “rubies across the vertical rear surface” Audi waxes, and extend across the car’s entire width. Transforming the vehicle from GT to Sports mode illuminates a signature lighting pattern from the headlights and taillights. The future does look bright, after all. 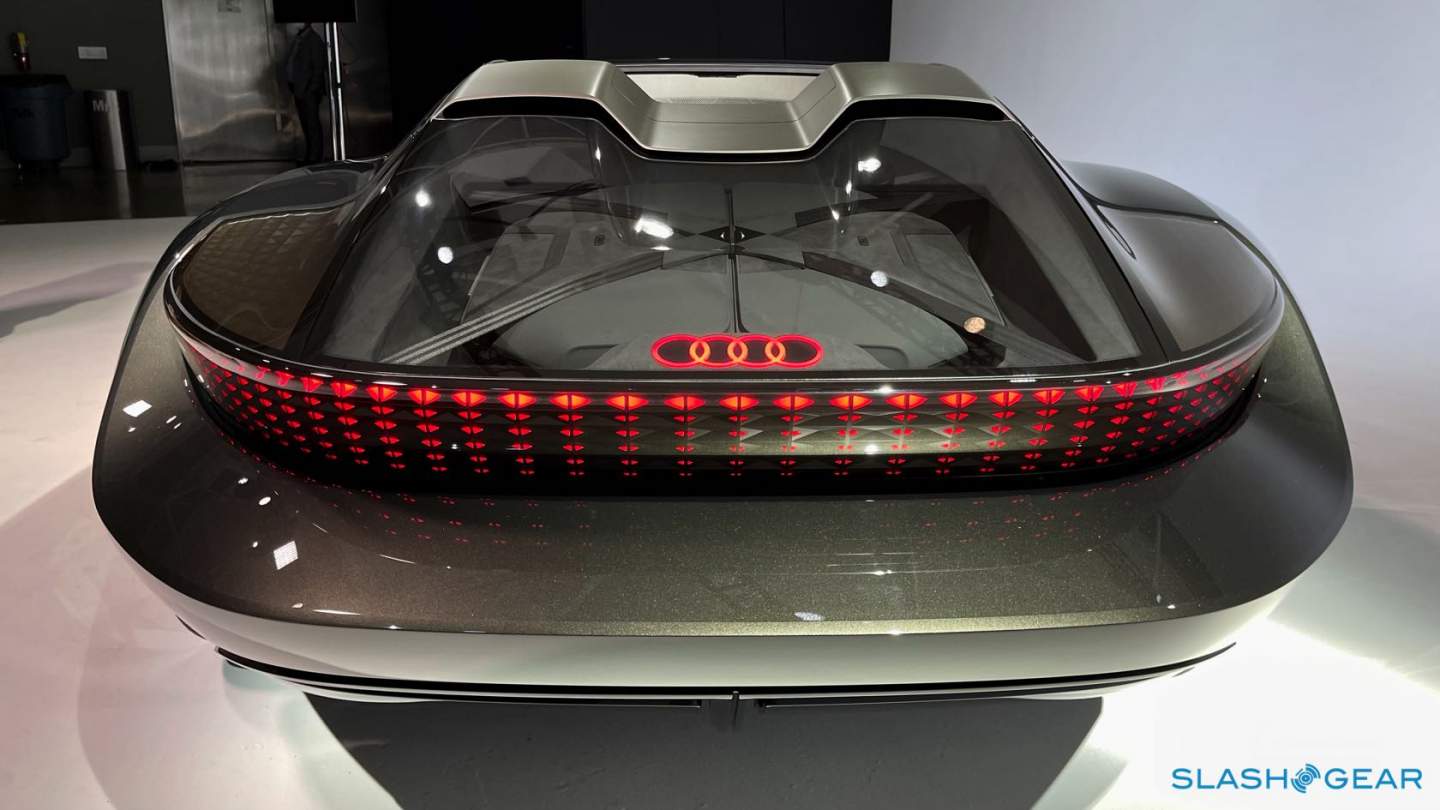 Typical of a concept, the Audi skysphere has fancy rear-hinged, wide-opening doors, revealing an immaculate cabin lined in sustainable materials like eco-friendly microfiber, eucalyptus wood, and synthetic leather upholstery to keep things thoroughly green. The entire dash fascia is a screen, similar to the Hyperscreen in a Mercedes-Benz EQS, offering 56 inches x 7 inches of visual real estate. However, half the screen moves forward to the driver when engaging in Sport mode, a complicated technical masterpiece that I wish would make it to production soon. 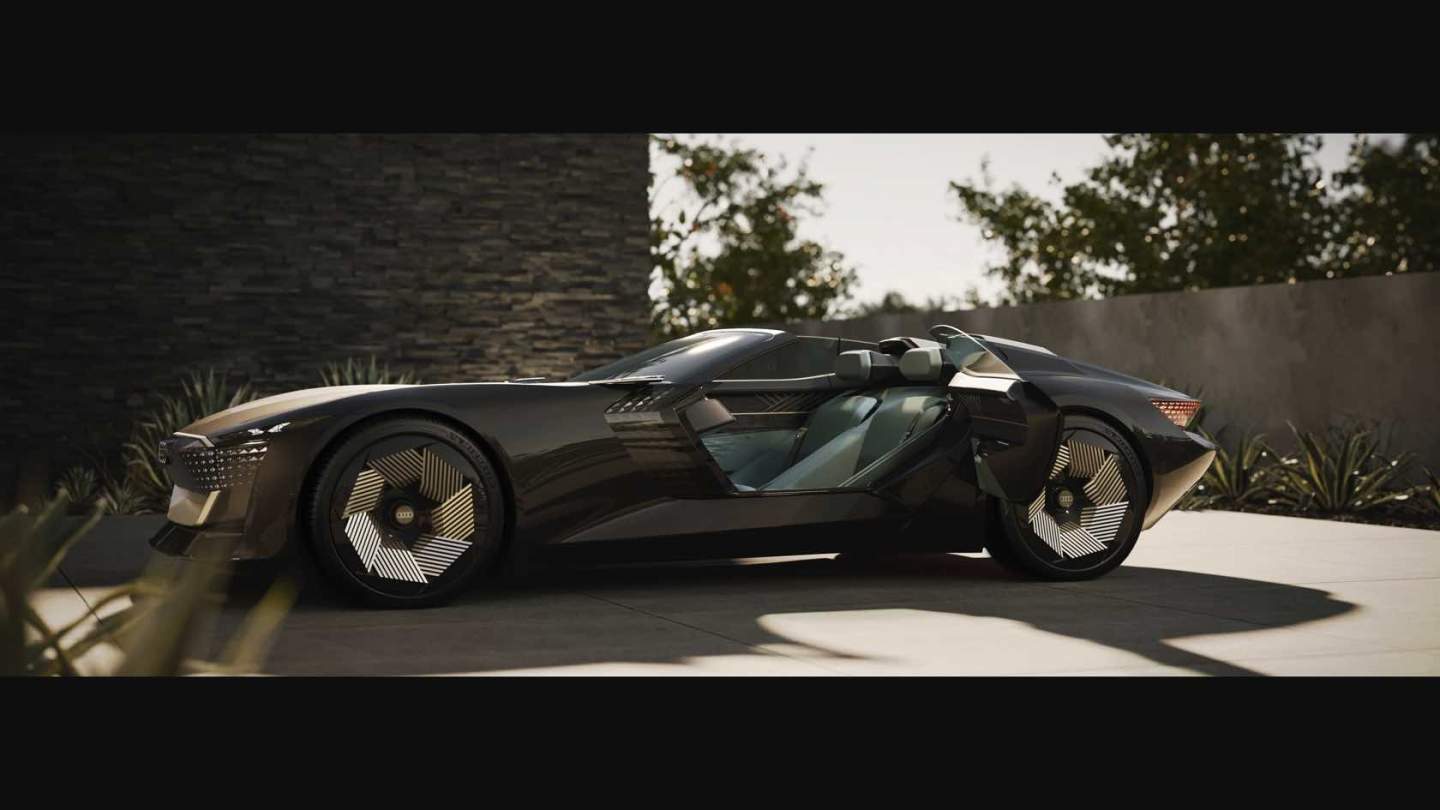 Best of all, the Audi skysphere has a roomy front trunk that offers enough room to store a pair of golf bags or luggage for a weekend getaway. It’s a pleasant surprise to have a “transformer roadster EV” with enough space for a couple of weekend bags. Admittedly, the Audi skysphere concept is not the first transforming car I’ve laid eyes on – the Renault Morhpoz from 2020 got there first – but it is the prettiest and most desirable so far. 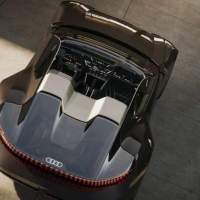 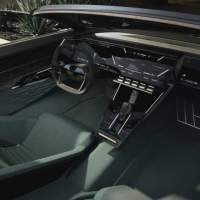 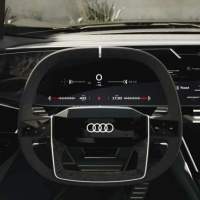 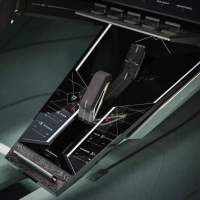 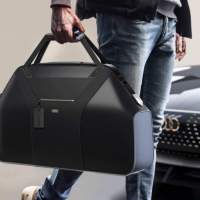 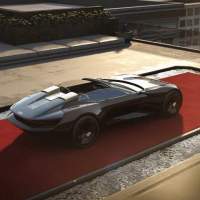 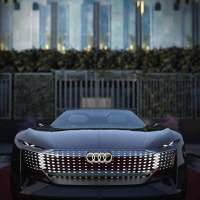 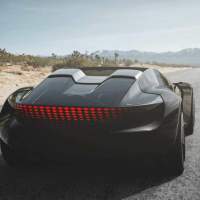 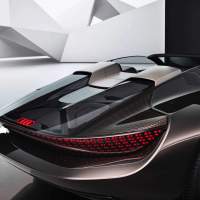 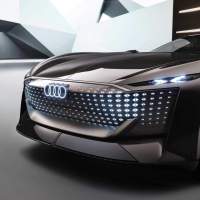 More than a concept, Audi skysphere presages a new design language for the German brand. With Audi grandsphere and the incoming Audi urbansphere concept we’re told to expect in 2022, Audi is showcasing what it sees as the new future of mobility: where human drivers and their digital counterparts not only coexist but collaborate, in a vehicle that accommodates both. The stretching, shrinking wheelbase may not make it to production, but the skysphere’s duality of driving experiences looks certain to.