Astronomers have discovered a new class of cosmic explosion

Astronomers have found a pair of objects that have been added to a strange object discovered in 2018 that combined to constitute a new class of cosmic explosions. The new type of explosion shares some of the characteristics with supernova explosions of massive stars and with the explosions that generate gamma-ray bursts. Despite the similarities, the new class of explosion has distinctive differences from each of the other classes.

In June 2018, astronomers first saw a cosmic blast with surprising characteristics and behavior. The object was dubbed AT2018cow or simply The Cow. The Cow drew worldwide attention from scientists and was extensively studied because it shared some attributes with supernova explosions but differed in some key characteristics. The two new explosions are CSS161010 and ZTF18abvkwla or “The Koala.” The first was discovered in 2016 and was about 500 million light-years from Earth.

The other was in 2018 and was 3.4 billion light-years away. Both were discovered by automated sky surveys using visible-like telescopes to scan large areas of the night sky. Scientists studying The Koala noted that the object had radio emissions as bright as those from a gamma-ray burst. Researchers investigating CSS161010 say it ejected an “unexpected” amount of material into interstellar space at more than half the speed of light. 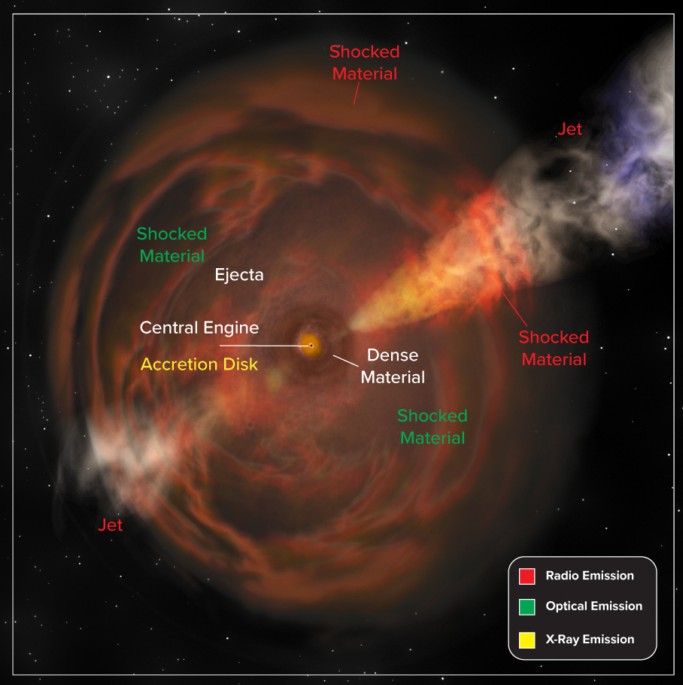 In both cases, follow-up observations indicated that the objects shared features with The Cow. Scientists concluded that the events, called Fast Blue Optical Transients, represent a type of stellar explosion significantly different from others. Fast Blue Optical Transients begin in the same way a certain supernovae and gamma-ray bursts when a star much more massive than the Sun explodes at the end of its normal atomic fusion-powered life. Where the differences show up is after the initial explosion.

Scientists determined that Fast Blue Optical Transients had the so-called “engine” seen in other types of explosions, but it’s enshrouded by thick material that was likely shed by the star before explosion. When the thick material near the star is struck by the blast wave after the explosion, a bright visible-light burst occurs, which is what makes the objects so unusual. Scientists say that the shroud of dense material means that the progenitor star is different from those that lead to gamma-ray bursts. Scientists believe that explosions like this trio occur in small, dwarf galaxies where properties allow for some very rare evolutionary paths of stars leading to the distinctive explosions.