Astronomers have announced a rather big discovery today, as the Atacama Large Millimeter/submillimeter Array (ALMA) in Chile has captured what appears to be the water snowline around V883 Orionis, a young star that has taken up residence in the Orion Nebula cluster, about 1,350 light years from Earth. This is the first time the water snowline has been seen in the disk of debris that forms around young stars and will eventually come together to form new planets.

The snowline signifies the point in this debris disk where the temperature and pressure drop low enough for ice to form among the other dust particles in the disk. Usually, scientists wouldn’t be able to see the line separating the rocky debris from the ice and snow, but a “violent outburst” from the star has pushed the line far enough out that it was picked up by ALMA. That outburst was brought on from debris falling into V883 Orionis, which then increased the brightness of the star and heated the inner portion of the disk, pushing the snowline further out than it would usually be.

The ring you see in the image below marks the separation of the disk’s rocky debris from the water ice that has formed in the disk’s outer reaches. Inside that ring, smaller rocky planets will likely form, while outside of the ring is where we’ll see larger gas giants form, much like in our own solar system. What you’re looking at, essentially, is the beginning stages of a solar system, complete with all the things you’d need to form planets like the one we call home. 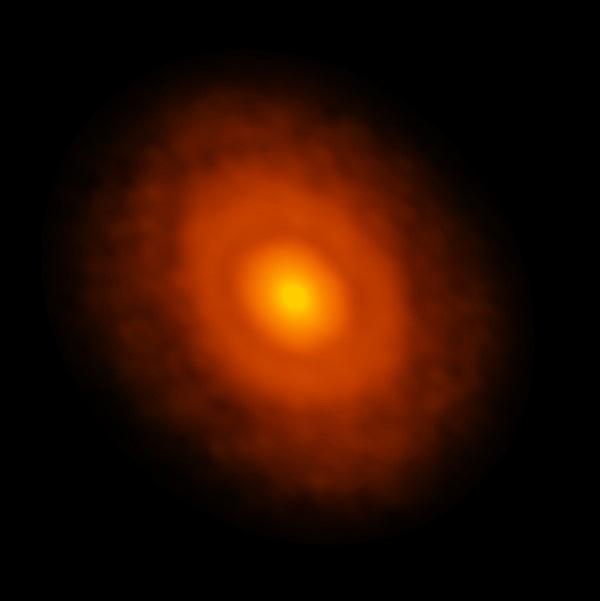 These most recent ALMA findings will be published in a paper in the July 14 edition of Nature, titled “Imaging the water snow-line during a protostellar outburst.” The paper’s lead author is astronomer Lucas Cieza from Diego Portales University in Santiago, Chile. Astronomer and co-author of the paper, Zhaohuan Zhu, from Princeton University noted in a statement that the way water ice is distributed around a developing star is “fundamental to planet formation and even the development of life on Earth.” Zhu went on to say that “ALMA’s observation sheds important light on how and where this happens in protoplanetary disks when young planets are still forming.”