Astronaut Thomas Pesquet is currently aboard the ISS and often has his Nikon D5 camera handy. The astronaut has in the past shared some beautiful images of the Earth from orbit. Recently, he shared some images of the Russian DC1 Pirs docking module and the Progress 77 cargo spacecraft burning up in the atmosphere.

After nearly 20 years of service, Pirs was disconnected from the space station, and the Progress 77 cargo spacecraft was used to push itself and the docking module into Earth’s atmosphere, where they burned up before hitting the ground. Pesquet says the ISS was pitched 90 degrees allowing it to fly belly first to help with the maneuver.

A few hours after its departure, the astronauts aboard the space station had a front-row seat to the fireball as the spacecraft and docking module disintegrated. The astronaut notes that he could see smaller pieces float away from the main fireworks as both spacecraft were destroyed by the heat generated by atmospheric friction.

The docking module and Progress 77 burned up in the atmosphere over the South Pacific Ocean. With the cargo spacecraft docking port gone, the Earth-facing side of the Russian segment of the space station is ready to accept the new Russian Multipurpose Laboratory Module. 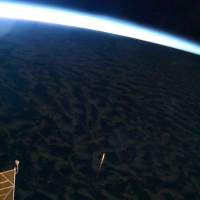 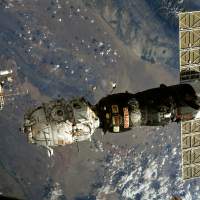 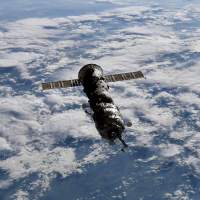 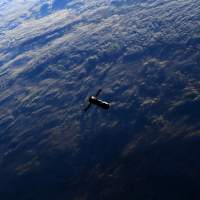 That laboratory module is finally being sent to the ISS after years of delay. Currently, the module, called Nauka, is scheduled to dock with the ISS on Thursday, July 29. The module was launched in orbit on July 21 and will act as a new science facility, docking port, and spacewalk airlock for the space station. NASA will air coverage of the docking starting at 8:30 AM Thursday, July 29. Pirs had been part of the space station since September 2001.