Aston Martin DBX SUV has a 4.0L twin-turbo V8 under the hood

Aston Martin is taking the time to talk up its upcoming DBX SUV. The DBX is the first Aston SUV and is entering the final stages of development. The vehicle may be an SUV more focused on hauling people and stuff than your typical Aston sports car, but it is still seeing extensive track development.

Aston says that the testing of the DBX has been the most comprehensive of any Aston Martin and the automaker is confirming the engine that will be used in the vehicle. Those hoping for a V12 will be disappointed to hear that the engine is a 4.0-liter twin-turbo V8 that makes 550PS and 700 Nm of torque.

Engineers have been testing the DBX on the famed Nurburgring as well as Silverstone. At the Nurburgring, the DBX is said to have delivered cornering speeds on par with the Vantage sports car. The braking figures that were recorded are greater than the Aston DBS Superleggera. 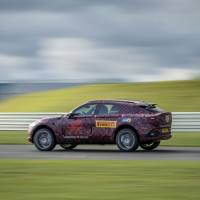 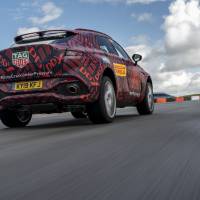 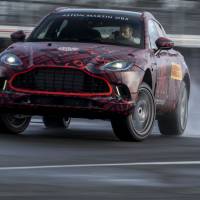 Aston says that the DBX SUV is potent enough that engineering teams regularly hit sub-8 minute Nordschleife lap times in the regular testing regime. While the V8 the DBX uses is under the hood of other Aston cars like the Vantage and DB11, the V8 has more power in DBX form. Aston says that testing has shown that the DBX can exceed 180 mph.

Acceleration and final top speed figures will be set in the final stages of testing. Along with details of the engine used in the DBX, a video of the SUV in action has been published that give us a good listen to the exhaust note that the DBX offers, and it sounds food. The official DBX unveil for the SUV is set for December.