The ebook reader market has steadily segmented into two niches: the entry-level, non wireless devices and the generally store-affiliated, connectivity-stuffed models. Astak’s EZ Reader falls resolutely into the former category, a compact tablet with a 5-inch E Ink display and basic functionality. Amid the Kindles and Nooks of the world is there room for the EZ Reader? Check out the full SlashGear review after the cut.

With no wireless to consider, the spec list for the EZ Reader is pretty straightforward. The 6 x 4.1 x 0.4 inch device is smaller than the average paperback novel, and just leaves room for a 5-inch 600 x 800 E Ink display and a few rows of shortcut buttons. Onboard storage is 512MB but there’s an SD card slot content with up to 16GB cards (and a USB 2.0 connection to make transferring files straightforward). The underlying OS is Linux, running on a Samsung ARM 9 400MHz processor; it’s certainly nippy enough that any page navigation delay is a side-effect of the e-paper rather than the system itself. Battery on the unit is user replaceable and provides roughly two weeks of reading time. 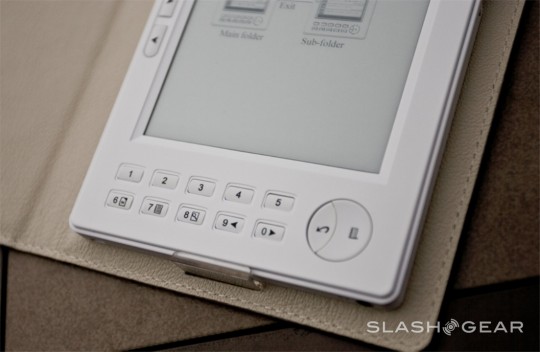 As you’d hope, there’s a broad range of format support for ebooks (and other files). The EZ Reader will display ADE, PDF, TXT, PDB, DOC, HTML, FB2, LIT, EPUB and PRC ebook files, together with BMP, JPG, TIF, PNG and GIF images, while there’s also a mediaplayer that will load MP3 files and play them in the background as you read. Astak have also built in some fancy text reflowing technology which handles PDF text reasonably well, even when the original document wasn’t really intended for ebook reader use, and there’s text-to-speech which is as clunky as you’d expect (but no doubt interesting to some users).

There’s no QWERTY keyboard or touchscreen, but given you’ll only be using the hardware controls to navigate files already on the EZ Reader, rather than accessing some sort of wireless ebook store, that’s less of an issue. Both right- and left-handed use is accommodated, using either page back/forward keys (on the left) or a scroll-wheel (on the right). At 6oz it’s easy to hold in one hand, and to do so for reasonably extended periods. 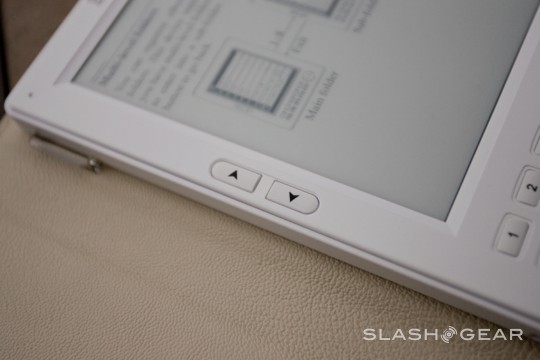 What sets the EZ Reader apart from some rivals is in its reading flexibility. Not only does it come with multiple language support – including English, French, Spanish, Chinese, Japanese and more – you can install your own fonts to use rather than the default set. At least three zoom levels are available, and the E Ink panel seemed to boast better contrast than Amazon’s second-gen Kindle, with text looking blacker and more defined.

Amazon have spent big money on their Kindle UI, and the shortcomings of the EZ Reader are obvious after even a brief play. Lists are navigated via the numbered keys under the display (you bizarrely can’t use the jog-wheel on the side to scroll through them) and there’s more digging through menus than we’d like. Still, we’re guessing the sort of audience who’ll buy something like this Astak will be slightly more tech-savvy than, say, a Kindle buyer; they’ll need to understand how to side-load content, after all. 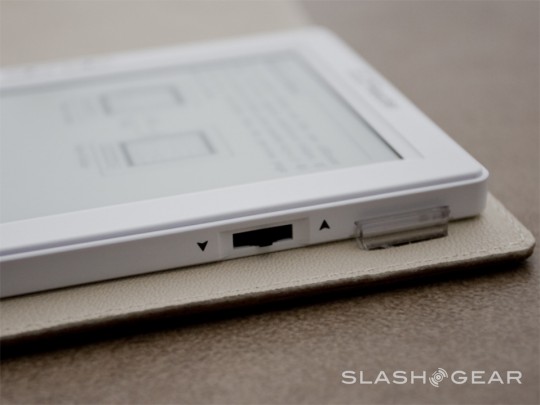 It’s easy to knock ebook readers that don’t include wireless connectivity; after all, an integrated 3G hook-up means you’re more than halfway to an eye-catching headline. Still, what it actually means is that there’s no one-click way to wireless spend money at a specific ebook store, and for many users that’s not something they actually want or need. In fact, there are plenty of reasons – cost being just one of them – where relying on the flexibility of side-loading content makes perfect sense.

The Astak EZ Reader doesn’t exactly grab the eye like a Kindle or Barnes and Noble Nook, but it’s reasonably flexible. The display may be compact at 5-inches, but that allows the device as a whole to be particularly portable; after all, just as the best camera is the one you have with you, the best ebook reader is the one you always drop into your bag as you leave the house. Our biggest disappointment is that Astak haven’t done some extra work to bring the price down: at $199 it’s close to Amazon and Barnes and Noble’s ebook reader offerings, and we reckon if the company undercut those by $100 or so then they’d have a decent competitor on their hands.