You know Apple are running a business, right? You don’t manage to shovel $100 billion into the bank without having good products and a healthy profit margin. Preliminary figures of the new iPad‘s component cost breakdown are hitting the interwebs today, with Apple reportedly taking a hit on their margin compared to the iPad 2.

Unsurprisingly, most of that cost seems to be coming from the new Retina display, apparently costing around $70, while the old 1024×768 display cost $49.50. Meanwhile, the LTE chipset would cost $21 compared to the $10 of the standard 3G chipset, and the A5X processor would ring in at $28 rather than the $22 for the old A5 chip. 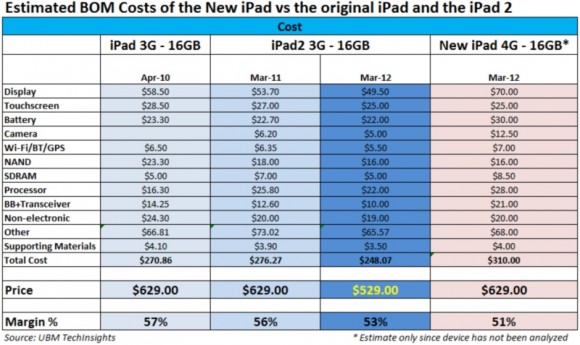 Of course, these are only rough estimates right now, with more precise costs to be determined once analysts get their hands on the new iPad and can tear it down. While it’s easy to say how much profit margin Apple are making purely based off component costs, it doesn’t factor in research and development, marketing, or any of the other things that go along with running a full scale business.